Reporting on the Supreme Court taking up the issue of gay marriage for the first time, on Friday's NBC Nightly News, justice correspondent Pete Williams proclaimed: "The fact that the Court has agreed to take up both cases could mean that the Justices are prepared to get to the heart of the same-sex marriage issue, and that could result in what would essentially be the Roe v. Wade of gay rights." [Listen to the audio or watch the video after the jump]

At the top of the broadcast, anchor Brian Williams billed the upcoming report as "big news...that could change everything." Introducing a repeat of the story on Saturday's Today, co-host Lester Holt announced: "Game changer? The U.S. Supreme Court plans to tackle two cases involving same-sex marriage. So will this become the law of the land?"

During the panel discussion on Sunday's Meet the Press, moderator David Gregory played a clip of the Friday Nightly News report, including the "Roe v. Wade of gay rights" line. Gregory then put the question to Newt Gingrich: "Do you think the tide is turning? We know it's turning in terms of public opinion. What does it mean that they're taking this on?"

Moments later, Gregory turned to left-wing MSNBC Last Word host Lawrence O'Donnell, who asserted: "We do know this, that if the Supreme Court rules against marriage equality in any fundamental way, that will not stand. The kids going to law school now who will be Supreme Court justices will overrule this. The ultimate end here is simply a matter of time."

Here is a full transcript of the December 7 Nightly News report:

BRIAN WILLIAMS: It was a rare event late on a Friday afternoon when we learned the U.S. Supreme Court is going to wade into one of the most talked about and emotional issues of our time, whether same-sex couples have the same rights as everybody else, specifically and especially, the right to marry. The Court has taken on two cases here from opposite ends of the country. And their rulings will stand as the law of the land. Our justice correspondent Pete Williams was there when word came down. He starts us off tonight. Pete, good evening. 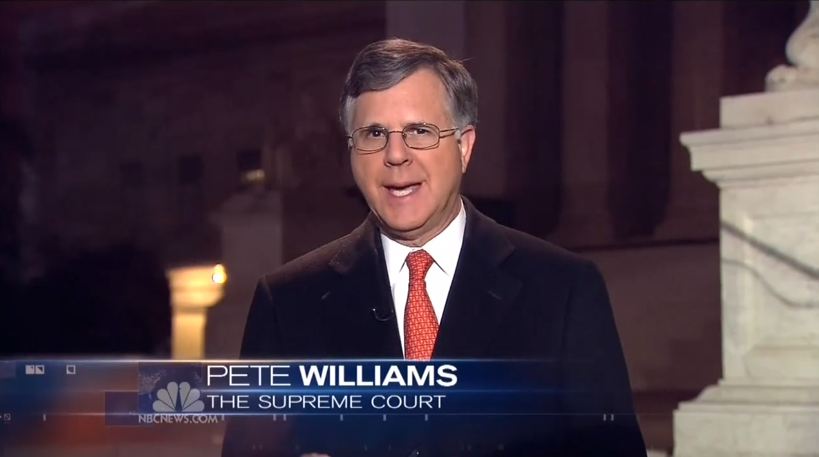 PETE WILLIAMS: And Brian, it will be historic. Because this is the first time the Supreme Court has ever agreed to take a serious look at the issue of same-sex marriages. And it will consider two questions, can the federal government refuse to recognize them in the states where they're already legal? And what's to become of them in California? Just a day after Washington state became the latest allowing gay couples to get married, the Supreme Court said it delve into one of the nation's most hotly-debated issues.

TOM GOLDSTEIN [SCOTUS BLOG]: This is a monumental action by the Supreme Court, because we know they're going to say something about gay marriage for the first time ever.

WILLIAMS: The court agreed to take up the legal battle over California's Proposition 8, passed by voters four years ago, ending same-sex marriage in the state. A federal appeals court ruled the ban unconstitutional on grounds that applied only in California. But now that the Supreme Court is wading in, the Justices could get to the more basic issue, can any state ban same-sex marriage? Nine now permit it or soon will, so does Washington, D.C. The Court also agreed to hear a challenge to the federal Defense of Marriage Act, it defines marriage as quote, "Only a legal union between one man and one woman." The law had a big effect on Edie Windsor of New York, who married Thea Spire in Canada in 2007. When Spire died two years later, leaving Windsor the estate, the IRS sent a tax bill for $363,000 because it did not consider them to be married.

EDIE WINDSOR: So it was the injustice, I think, ultimately. I just couldn't believe it, I couldn't believe that they were making a stranger of this person I lived with and loved for 43-something years.

WILLIAMS: Under that law, same-sex marriage couples who are legally married are denied about 1,000 federal benefits that other married couples get. After first supporting the Defense of Marriage Act, the Obama administration concluded last year that it violates the Constitution.

BARACK OBAMA: We cannot defend the federal government poking its nose into what states are doing and putting the thumb on the scale against same-sex couples.

WILLIAMS: The fact that the Court has agreed to take up both cases could mean that the Justices are prepared to get to the heart of the same-sex marriage issue, and that could result in what would essentially be the Roe v. Wade of gay rights. Brian.

BRIAN WILLIAMS: Pete Williams starting us off at the Court tonight with this important development. Pete, thanks.