CBS 'Early Show' Praises Perez Hilton for Giving Up Bullying, But Promoted It In the Past 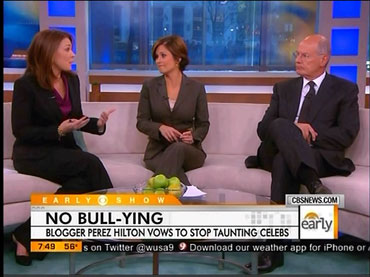 At the top of Thursday's CBS Early Show, co-host Maggie Rodriguez declared that vicious gossip monger Perez Hilton "makes nice....with so much bullying going on he doesn't want to be a bully himself anymore." While the report that followed cheered Hilton's efforts to reform himself, the morning show has been happy to promote his bullying tactics in the past.

Correspondent Ben Tracy noted how Hilton "controversially outed gay performers like Lance Bass and Neil Patrick Harris." However, on the September 25, 2008 Early Show, correspondent Michelle Gillen seemed to have no problem with it as she reported on Hollywood's acceptance of gay celebrities: "Neal Patrick Harris...remains a high profile star since he was outed by celebrity blogger Perez Hilton." A clip was played of Hilton claiming such outing was "par for the course" and Gillen concluded: "Now that 'out' is apparently 'in.'"

In another case, former co-host Julie Chen interviewed Hilton on the April 21, 2009 broadcast about him asking Miss California Carrie Prejean her views on gay marriage during the Miss America contest. While Chen noted that Hilton "reacted angrily" to Prejean's opposition to gay marriage, she failed to hold him accountable for calling the beauty pageant contestant a "dumb b***h." The only thing depicted as controversial in the segment was Prejean’s answer to the question, not the question itself or Hilton’s attacks.

In his October 9 column, NewsBusters publisher and Media Research Center President Brent Bozell condemned the fact that many of the most prominent Hollywood bullies have recently been touted by the media as anti-bullying advocates. Bozell singled-out Hilton for his nastiness toward Prejean and that "Now he’s featured on CNN in an ongoing parade of guests denouncing conservatives for bullying."

The Thursday Early Show report featured a clip of Hilton explaining his supposed change of heart: "Over the last week and a half, two weeks, I've been doing everything I can to bring awareness to the issue of the teen suicides and gay bullying, and in doing so, a lot of people have called me a hypocrite." Tracy concluded: "Perez says he doesn't care if he loses some of his audience. It's more important to be part of the solution than the problem."

Following Tracy's report, news reader Erica Hill observed: "...the ideal takeaway here would be that maybe they get it, too, and that the bullying happens at all ages across all platforms and it's never okay." Co-host Maggie Rodriguez added: "I just think it's unfortunate that it took all those suicides to make someone realize that mean is bad." If only the Early Show could have stood up to the bully earlier.

Here is a full transcript of Tracy's October 14 report:

MAGGIE RODRIGUEZ: And Perez Hilton makes nice. The celebrity blogger known as the 'Queen of Mean' tells Ellen with so much bullying going on he doesn't want to be a bully himself anymore. So, will his millions of followers now log off?

RODRIGUEZ: Also ahead, the new Perez Hilton. He says no more snark and no more nasty nicknames. So, what will he do? It's kind of who he is.

RODRIGUEZ: Also, if you're familiar with Perez Hilton, he's celebrity blogger, you know that he's mean. He admits it he calls himself the 'Queen of Mean.' But he says because there's been so much bullying, especially against gays – he, himself is gay – he's been called a hypocrite for being so mean, so he says he will stop. We'll talk more about that.

RODRIGUEZ: Also this morning, why Perez Hilton is saying he doesn't want to be a bully anymore. He made his reputation in the gossip world by being mean, but he swears he will be nicer from now on. We'll tell you why and see if his fans are ready to follow him.

RODRIGUEZ: Up next, a kinder, gentler Perez Hilton. Do you believe it? The very serious reason the 'Queen of Mean' says he's changing his act.

ERICA HILL: The internet could be a little safer soon, for celebrities, at least. The infamously mean, in fact, the self-described 'Queen of Mean,' Perez Hilton, says he's decided to actually be nice from now on. As CBS News correspondent Ben Tracy reports, it's a big change for the online gossip giant.

PEREZ HILTON: I am very happy, scared, and ready to make this video.

TRACY: The openly gay and self-declared 'Queen of All Media' boasts that his popular website is 'Hollywood's most hated.' He regularly calls Jennifer Aniston, 'Man-iston,' Sienna Miller 'Slutty-ienna,' he controversially outed gay performers like Lance Bass and Neil Patrick Harris. He doodles on celebrity photos, adding cocaine. Linked to a photo of underage Miley Cyrus and claimed she wasn't wearing underwear. He even posted that Michael Jackson's death was a hoax. But Hilton says it's time to make a change. He explained that to a skeptical Ellen DeGeneres Wednesday.

ELLEN DEGENERES: A lot of people don't believe you but if you say you want to change and you to –  I think it takes a big person to look at themselves and say, 'I've done wrong and I want to change,' so I want to listen to what you have to say.

HILTON: I'm going to do things differently on my website than I have in the past. I'm not going to call people nasty nicknames.

TRACY: So, why the sudden change of heart? Perez says it's because of the recent rash of suicides among gay teens, including the cyber-bullying and death of Rutgers student Tyler Clemente last month.

HILTON: Over the last week and a half, two weeks, I've been doing everything I can to bring awareness to the issue of the teen suicides and gay bullying, and in doing so, a lot of people have called me a hypocrite.

TRACY: Hilton may be dropping the mean but he promises to keep the sass. But is that what his fans really want?

KRISTIN BENSON [EDITIOR, HOLLYWOODLIFE.COM]: The important thing about Perez Hilton is he's established himself as this brand, this mean snarky brand, and if he takes away the mean and the snarky, is his brand left? We're going to have to see.

TRACY: Perez says he doesn't care if he loses some of his audience. It's more important to be part of the solution than the problem. Ben Tracy, CBS News, Los Angeles.

HILL: It'll be interesting to see if there is any change and it will be – and how his followers-

HILL: React to this, how they respond, because, I mean, the ideal takeaway here would be that maybe they get it, too and that the bullying happens at all ages across all platforms and it's never okay.

RODRIGUEZ: Right, I think it's great, I just think it's unfortunate that it took all those suicides to make someone realize that mean is bad. But, better late than ever. So let's hope he sticks to it.