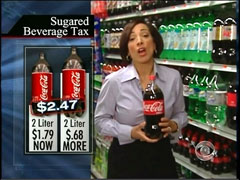 Concluding a report on proposed soda taxes across the country on Monday's CBS Evening News, correspondent Michelle Miller gleefully proclaimed how such a tax would help fight obesity and fill local government coffers: "New York's mayor estimates a tax would raise a billion dollars, suggesting what's good for the waistline could be good for the bottom line."

Miller began the segment by touting: "When former President Bill Clinton enlisted the beverage industry in fighting childhood obesity, he did not expect this much progress in just four years." A clip was played of Clinton reporting: "There has been an 88% reduction in the total beverage calories shipped to schools." Miller then declared: "That's still not good enough, say some public health officials. A growing number of cities and states wants to reduce adult consumption of sugary drinks by taxing them."

Revealing how bad such a tax would be for the "bottom line" of consumers, Miller explained: "New York has revived a proposal to impose a penny per ounce tax on sweetened beverages....[that] would mean this two-liter bottle of coke, which now retails for $1.79, would cost you 68 cents more, for a total of $2.47." She managed to find one man who was happy to pay an even higher amount: "I think it should be two cents per ounce. I don't mind paying more for it, it would probably discourage me from drinking it."

Miller noted how the American Beverage Association was opposed to a tax and played a clip of president and CEO Susan Neely explaining: "It won't work. If it's supposed to solve a complicated problem like obesity, the tax is not going to change behaviors." Miller disagreed: "A study released today suggests it would, claiming an 18% price increase on soda would lead people to trim 56 calories from a daily diet. That's a five-pound weight loss over a year." Bobby Popkin from the Nutrition Department of the Gilling School of Public Health, UNC added: "It's the first study to actually follow people over time and show this...increase in prices will matter for our public's health."

Anchor Katie Couric introduced the story by equating the American people with school children: "For years there's been an effort to make students healthier by keeping sugary soft drinks out of schools. And a report out today says it seems to be working....Now Michelle Miller tells us this campaign is expanded beyond the classroom and from kids to adults."
Taxes CBS Evening News Michelle Miller