CBS’s Katie Couric Gets Another Journalism Award for Palin Interview 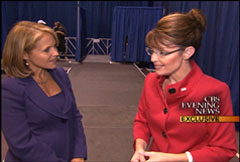 In yet another testament to liberals celebrating liberals, on Thursday the Columbia University Graduate School of Journalism announced that CBS Evening News anchor Katie Couric won the Alfred I. duPont award for excellence in broadcast journalism for her slanted 2008 interview with vice presidential nominee Sarah Palin.

In the interview, shown over a number of days on the CBS Evening News in September of 2008, Couric routinely sought trip up Palin. As NewsBusters' Brent Baker reported, on the September 29 broadcast, Couric pounded Palin on Pakistan, despite lobbing softballs to Joe Biden on the economy.

MediaBistro.com’s TVNewser obtained note to staff from CBS News and Sports president Sean McManus, who proclaimed that the award was “a testament to Katie’s excellence” and added that “the interviews have gone on to become an iconic moment in television journalism.” He also noted that the interviews “had a profound impact on the presidential campaign.” So much for journalists being neutral observers.