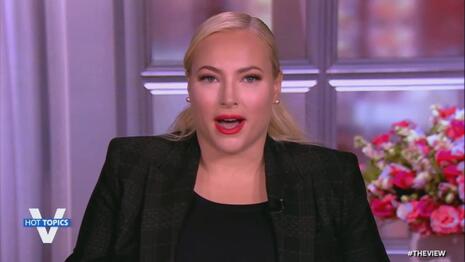 If you can believe it, it looks like The View will be even more of a liberal echo chamber pretty soon. After rumors leaked overnight, co-host Meghan McCain confirmed today that after four years she was leaving the show at the end of the season.

Thursday’s show opened with McCain’s announcement. “So I -- I'm just going to rip the band-aid off. I am here to tell all of you, my wonderful co-hosts and the viewers at home that this is going to be my last season here at The View. I will be here through the end of July to finish out the season with all of you, which I am grateful for,” she began before explaining she was leaving so she could be closer to her family in Washington D.C., after having her daughter last year: “I just have this really wonderful life here that ultimately I felt like I didn't want to leave,” she stated.

But according to Page Six, McCain may have been fed up with arguing with her left-wing co-hosts. The sole conservative was never shy to share her opinion and she frequently clashed with equally outspoken liberal co-host Joy Behar. According to a Disney source, “ABC begged for her to stay [and] she said ‘No — I’m done! I’m not staying anymore” and “She’s just had enough. She doesn’t need it anymore — she really doesn’t need it.”

Nearly two years ago, media outlets had reported McCain was ready to leave the show. At the time, sources “close to McCain” reportedly revealed she was thinking of quitting because she felt “like a caged animal." Still, McCain lasted much longer than her previous conservative predecessors, Jedediah Bila and Candace Cameron Bure.

Unlike most shows however, today's segment was cordial and professional. McCain thanked her co-hosts, the show producers and network ABC, before her co-hosts chimed in complimenting McCain for how “ tough” she was, how she was “no snowflake” and a “really formidable opponent.”

McCain was a strong critic of the media while on the show, which often ticked off her co-hosts.

In February she hit back against her co-hosts and the media’s agenda driven talking points that Republicans were a party of violence:

If that's the truth, then the Democratic Party is the party of Socialism and late term abortion and cancel culture and no responsibilities or ramifications for any of your actions. And you can burn down cities like Kenosha and it's fine and there’s no ramifications. These are broad stroke platitudes. I don’t believe either are true.

And despite her family’s friendship with the Bidens, McCain hasn’t been afraid to criticize the media for giving the Democratic president a pass. During a May 13 appearance she slammed the media's "strategy" of ignoring everything bad that happens under President Biden's leadership:

A strategy is not focusing on anything the Biden administration is doing right now that's leading this country into crisis. There's a crisis at the border. Inflation rates are sky high. The Middle East is on fire. Unemployment is crazy. And a lot of Americans can't figure out how to get gas in the car. These are real problems. It's like the '70s all over again. So I think there's a strategy that the media doesn't want to focus on anything bad happening in the Biden administration. I implore everyone who works in the industry, just because Trump was so bad doesn't mean this is good.

This season will be wrapping up this summer but no announcement has been made from ABC just yet about who will take her spot.

Skittles and Dove sponsor The View, contact them at the Conservatives fight back page here.