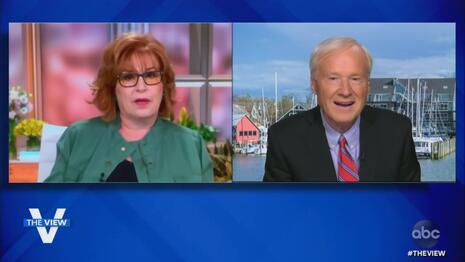 Former MSNBC Hardball host Chris Matthews made his media rounds on The View Wednesday, to plug his new book and comment on the current news cycle. Unlike most liberal guests on the show, Matthews faced an awkward combination of confrontational and friendly questions.

The interview started off with the hosts addressing Matthews' past sexist comments and inappropriate behavior towards women. Sunny Hostin asked about being pressured to retire last year after a Huffington Post journalist detailed his pattern of sexually suggestive comments to her. “Was it your decision to leave and what were the lessons learned in retrospect?,” she asked.

Despite his abrupt retirement announcement last year, Matthews claimed it was his decision to leave the network after the “factual” reporting came out. “I said it all was true. I retired. That was the decision I made. I may have faced some sort of discipline by the network, but I'm telling you, I sat in that room and told the president of the network I'm leaving.”

Joy Behar followed up by digging up sexist comments Matthews allegedly made about Hillary Clinton back in 2008. But she softened the blow with some compliments:

“I believe you. I appreciate your mea culpa, Chris. Like I said, I do miss your show. I want to talk about another part of what happened to you. You made a lot of sexist comments about Hillary Clinton. You called her she devil, witchy, Nurse Ratched--”

Matthews interrupted her to blatantly deny that he said these things, saying, “I never did, look it up.” Furthermore, he blamed Republicans: “ It was setting up what the Republicans were going to do to her in that campaign. It was a set up to a whole segment on the program about how the Republicans were not going to run against her on the issues. They're going to go after her personally - in that kind of attack. That misogynist attack. That's how that phrase was used.”

Behar took his word for it: “It was reported you said those things so, my bad, I think,” she conceded.

Thankfully for the veteran political commentator, the rest of the interview was easy breezy. Sara Haines asked Matthews about Republicans trying to “sweep under the rug” the January 6 Capitol attack, after he had a brief stint as as a Capitol Police officer; Meghan McCain asked if bipartisanship could be achieved like during the Reagan administration; and Joy Behar finished out the interview by commiserating with Matthews over "autocrat" Republicans.

The liberal host fretted, “Voting rights are under attack” and quoted President Biden warning that “‘democracy itself is in peril.’”

“We are in a bad place I think in this country. Do you think that enough is being done to counteract this trend toward autocracy, sir?,” she frantically asked.

Not one to tone down extremist rhetoric, Matthews “agreed” with Behar that the country was turning into a place he didn’t recognize:

Well I tell you I agree with your feeling….I covered the Berlin Wall coming down. I saw people who wanted freedom. I was in South Africa when they got to vote for the first time... Voting is a treasure we have in this country....

He added, “I used to think we could teach the world how to be democrats, how to have elections and democracy” but because of GOP election security laws, “I worry about it today.”

Citing recent “coup” comments by retired Army General Michael Flynn and election laws again, Matthews called on GOP leaders to “stand up against this talk of ending democracy in this country” before asking, “Are they really for democracy?”

It's a bit difficult to take Behar seriously, when she has been crying wolf about Republican “fascists” and “autocrats” for the past five years:

Joy Behar: America Has to Again Fight Fascism, Except It's the GOP This Time

'View' Blames Trump for Democrat Scandals: Like ‘Ebola’ His ‘‘Fascism’ Is ‘Catching’

Joy Behar on CPAC: Conservatives Have a ‘Penchant for Nazis Now’

Contact The View's sponsors Crest at the Conservatives Fight Back page here.

Read a partial transcript below:

MEGHAN MCCAIN: You served as a top aide to house speaker Tip O'Neil during the Reagan years. And in this book you write about how speaker O'Neill could both plot against president Reagan and get deals done with him at the same time. Why aren't we seeing that kind of bipartisanship today? And is it fair to expect Republicans to roll over for the sake of unity when President Biden is pushing a Progressive and expensive agenda? And he's attacking people like Joe Manchin for working with Republicans.

MATTHEWS: That's a lot….Tip O'Neill and Ronald Reagan were opposites. Tip was a classic liberal and Ronald Reagan a strong conservative. They could sit down to make deals. They reduced the tax rates and got rid of the loopholes. Tip went to Gorbachev and said don't work around Ronald Reagan. He's our president. He wants to reduce the number of nuclear weapons. He's our guy. He did that with Bob Michel, the Republican leader. They did a lot together with Northern Ireland to bring peace there. I can't tell you what's in the DNA today where Kevin McCarthy doesn't want to deal and Biden is a moderate with a Progressive agenda, I agree. They're not working together.

JOY BEHAR: Chris, it's only an hour show. You have to keep it a little shorter. I have a nice question for you here.  Much has gone on in the country since you left the air waves. Let's talk about a couple facts. Like who won the election. Still being disputed! Voting rights are under attack in states like Texas and Republicans just blocked the creation of a bipartisan commission to investigate the Capitol insurrection. This weekend President Biden warned that ‘democracy itself is in peril.’ We are in a bad place I think in this country. Do you think that enough is being done to counteract this trend toward autocracy, sir?

CHRIS MATTHEWS: Well I tell you I agree with your feeling….I covered the Berlin Wall coming down. I saw people who wanted freedom.I was in South Africa when they got to vote for the first time... Voting is a treasure we have in this country. I used to think we could teach the world how to be democrats, how to have elections and democracy. I'm proud of the fact we have elections every 2 years for congress, every 4 years for the - president. I love that. That’s the thing thought we always had and always will have. I worry about it today.

When two thirds of the Republican party say the election last time didn't happen. I worry when a general tries talking about military coups like seven days in May.  I can’t believe it would come to this country. The leaders have to stand up against it. The leaders have to lead. That's McConnell, that’s McCarthy. If it would ever happen, Trump, if it would ever happen, stand up against this talk of ending democracy in this country. I worry if there's not a big bunch of Americans who are not for majority rule! They want to reduce the size of the electorate. They want to do all the techniques to keep people from voting. Are they really for democracy? Ask them. I'm with you, Joy.

WHOOPI GOLDBERG: That's the question that we try to ask everybody. What are we doing?