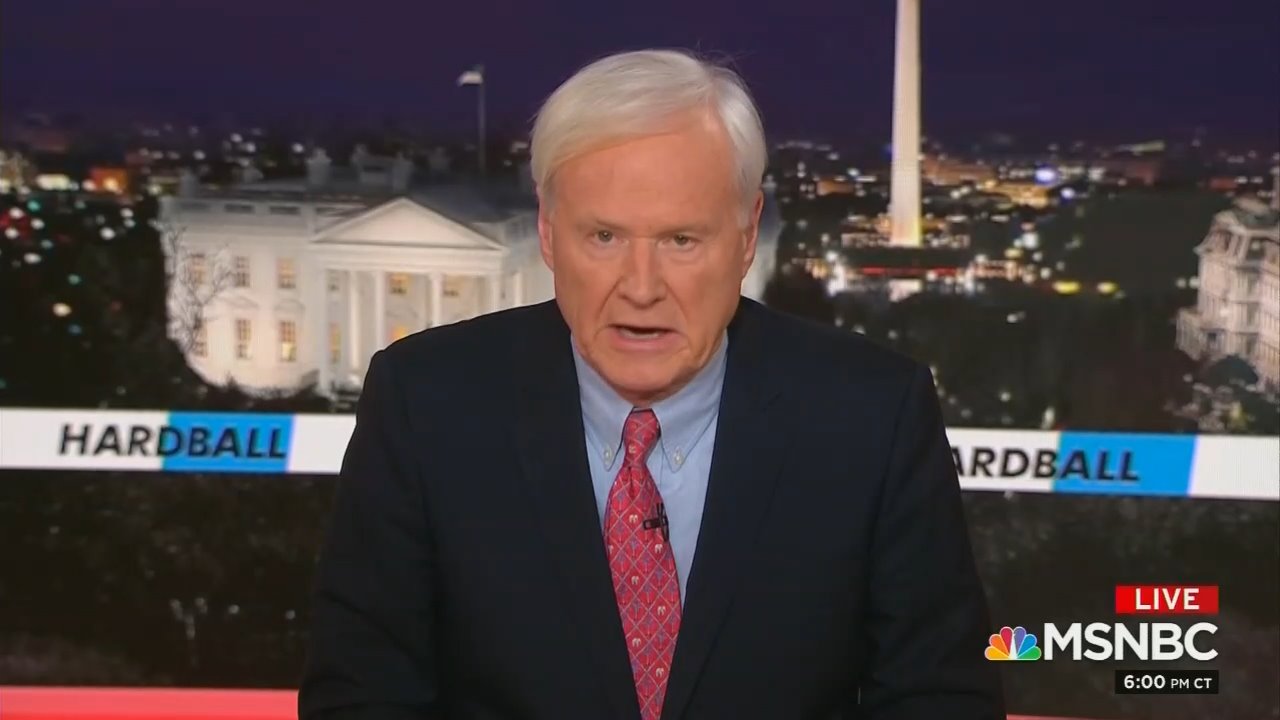 On the Monday before “Super Tuesday,” longtime MSNBC host Chris Matthews came on the air and promptly, tartly announced he was retiring, that “this will be my last Hardball.” His language and tone strongly implied he was being pushed out.

Politically, it felt like part of a pattern. At the same time that Pete Buttigieg and Amy Klobuchar suddenly dropped out of the race in an apparent attempt to solidify the anti-Bernie Sanders vote, MSNBC was acting in the opposite direction, shedding a host that had become a liability with the Sanders socialists who are a decent chunk of the MSNBC audience.

The host’s insensitivity to women on the set played a part, but the offenses were verbal. He wasn’t accused of sexual assault (Matt Lauer) or a “crusty paw” and exhibitionism (Charlie Rose). He was accused of saying things that made women uncomfortable, like “why haven’t I fallen in love with you yet?” That’s not a smart way for a married man to talk, but it doesn’t compare with more malignant, more physical abusers.

The larger part of this is Matthews falling out of step with the Democratic Party’s lunge to the left in the Trump era. The MSNBC star reacted badly by comparing the Sanders victory in Nevada as somehow akin to the fall of France to the Nazis during World War II. He also ripped into Bernie for lauding Fidel Castro’s literacy programs.

“I have an attitude towards Castro,” Matthews announced. “I believe if Castro and the Reds had won the Cold War, there would have been executions in Central Park and I might have been one of the ones getting executed.”

That’s not just out of step with today’s left. Anyone who’s watched the American media from the Bay of Pigs forward knows that top journalists from Barbara Walters to Dan Rather to Katie Couric have sounded just like Sanders in hailing Castro’s alleged “workers paradise” with literacy programs and  “free health care” and “one of the lowest infant mortality rates in the world.”

In this campaign, it seemed Matthews was still carrying on his great political love affair with Obama, and his vice president, Joe Biden, who is now inaccurately categorized as the “moderate wing.” He’s best known for exclaiming how Obama’s oh-so-American oratory gave him a “thrill” up his leg.

Because he worked at MSNBC, Matthews was never punished for comparing President Trump to Hitler, or Stalin, or Satan. Historical metaphors were endlessly mangled. One night, he assailed Trump by blurring together Julius Caesar, Benito Mussolini, and the cannibal-dictator Idi Amin. He criticized the president for alleged dementia – and in rants like this, he made people wonder about his mental state.

Republicans were “North Korean soldiers,” and Trump’s children were “Uday and Qusay,” the crazy, murderous offspring of Iraqi dictator Saddam Hussein. The Washington Free Beacon counted that Matthews compared the Trumps to the “Russian royal family” the Romanovs – who were executed in the communist revolution – at least 15 times.

The relentless babble of Matthews might recall for some bookworms the words of H.L. Mencken decrying President Warren Harding’s English: “It is so bad that a sort of grandeur creeps into it....It is rumble and bumble. It is flap and doodle. It is balder and dash.”

There are consolations to the sudden end of Hardball with Chris Matthews. We may confidently assume that no one in Hollywood will make a nasty cartoon of a movie about MSNBC, with a blonde bombshell playing a fictional intern absorbing creepy compliments from  Matthews. It’s still nice to be a Democrat.