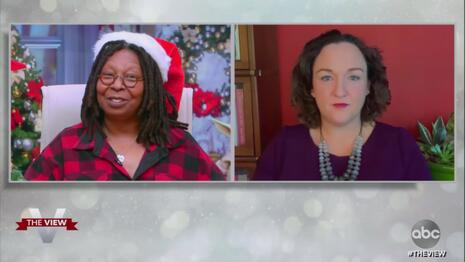 California Democrat Rep. Katie Porter joined The View Friday and as usual when Democrats are interviewed by the media, all the questions were softballs or neutral questions. The hosts even let Porter get away with talking about how important it is for Americans to get the COVID-19 vaccine, while still seeming to question its safety with President Trump still in office.

After playing a contentious clip between Porter and Treasury Secretary Steve Mnuchin during a House hearing last week, co-host Whoopi Goldberg praised the Democrat for condescendingly womansplaining to Mnuchin:

Hell yes, she's a lawyer! Which Steve Mnuchin found out the hard way, and she joins us now to tell us why he's not the only Republican she's coming for right now. Please welcome the amazing Congresswoman, Katie Porter. [claps] Welcome to The View. So fabulous. So fabulous. So when you started with reclaiming my time, I was, like, ‘uh-oh. Uh-oh. She's about to put him in his place.’ [chuckles] I mean, we all wanted to just scream. I mean, I did scream to the television. I said, why the hell don't you know that she's a lawyer? Didn't he have any of your -- didn't he know who you were before he came and sat before you?

HOSTIN: [T]hat confrontation was about the $455 billion in COVID-19 relief Mnuchin is trying to put back into the treasury's fund, so the Biden administration couldn't touch it, can't touch it. I've said all we have to do to see who is to blame for not helping is ‘follow the money.’ Follow the money. Do you agree with that assessment?

BEHAR: So you have called out Mitch McConnell for holding -- holding up these negotiations because he won't budge on protecting corporations that you say represent the worst examples of disregard for human life. So he protects corporations more than people. Am I right? What's going on here? Tell us.

BEHAR: Yesterday 106 Republican members of Congress, your colleagues signed a brief supporting a Trump-backed lawsuit to overturn the election. I mean, I don't understand how they can do that, and it's probably not going to go anywhere, but what do you make of this? I'm outraged by this. To me, this is so treasonous and such a traitorous behavior. What do you say to this?

Sara Haines asked a neutral question about bipartisan stimulus relief, while Ana Navarro asked Porter which side of her party she agrees with on using "defund the police" messaging. The last question Navarro asked was about the coronavirus vaccine: "How confident are you that this administration has a solid plan for distribution, and that people will actually take it?" she asked.

Porter responded by seeming to question again the safety of the vaccine while still insisting people take it:

[I]'s really, really important that people do believe that the vaccine is safe and effective, and the responsibility is on the government to demonstrate that to people, and the lack of credibility that Trump has created about his ability to handle this crisis makes that a challenge. So I think it's -- this is one of the reasons that leaving Dr. Fauci in power, making sure that scientists can speak up, they can show that we have an open and transparent FDA approval process, so that people who have questions about the vaccine are getting answers, so that we understand for example, that we have more information about the safety and effectiveness of the vaccine for adults than we do about children right now, but we're working to get that information about kids.

Democrats like Porter and Kamala Harris led the media in putting politics about public safety in casting doubt about the safety of this vaccine before the election, and now they want to reverse course and avoid taking responsibility for their damaging actions.

Lean Cuisine and Garnier sponsor The View, contact them at the Conservatives fight back page here.