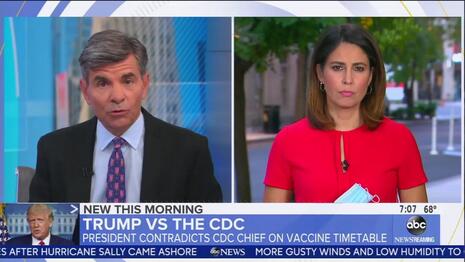 The media is so desperate to get President Trump out of office they are actually willing to scare vulnerable Americans into not taking a vaccine that could save their lives. Earlier this month, the big three networks touted Kamala Harris warning Americans not to trust Trump with a vaccine. Yesterday, Biden came out with his own dangerous message telling Americans to not take any vaccine that comes out while Trump’s in office.

On ABC’s Good Morning America Thursday, White House correspondent Cecilia Vega and anchor George Stephanopoulos spent a good deal of time deflecting blame from the Democrat ticket sowing fear about a COVID vaccine to project it was actually being “politicized” by President Trump.

Vega’s report touted overnight disagreement between CDC Director Robert Redfield and President Trump over when a vaccine could be available (Redfield says 2021 while Trump expressed hope for this year.) The journalist also touted another time reporters goaded the president to contradict Redfield on how effective vaccines are vs. masks, but she took the CDC director out of context to make this point (see transcript below).

Even though the primary disagreement was over the timeline of when the vaccine will be available, Vega hyped, “Now people in this country are forced to choose whether to believe the president or the nation’s top health experts!”

In case it wasn’t clear this media-hyped controversy was all about the election, Vega dutifully touted Joe Biden spreading a dangerous message that Americans should be scared of taking any vaccine with Trump as president:

BIDEN: We can't allow politics to interfere with the vaccine in any way. So let me be clear, I trust vaccines. I trust the scientists but I don't trust Donald Trump.

ABC omitted the last part of Biden's statement: "I trust vaccines. I trust scientists. But I don’t trust Donald Trump. And at this moment, the American people can’t, either.”

Vega doubled down on this menacing message to end her report:

VEGA: Dr. Redfield said that the scientific integrity of the CDC had not been compromised by politics, George. There are serious questions about whether that is actually the case this morning.

Stephanopoulos openly floated the left’s anti-science conspiracy that President Trump was somehow involved in compromising the safety of the vaccine. After asking the doctor to tell viewers how effective masks are, he asked these alarming questions:

[T]hen we get into the question of what are we all supposed to take away when we see the president questioning the CDC director? Implication there there is pressure on the CDC director. What impact will that have on whether people think a vaccine is safe and effective when it in fact, is distributed?

…. Can Americans still trust what they're hearing from the CDC?

ABC's anti-science fearmongering was sponsored by advertisers Safelite and US Bank. You can contact them by following the links listed.

CECILIA VEGA: Good morning to you. This has been a pattern. The president publicly contradicting the scientists in his own administration but this time this example, this was really something. Here we are with nearly 200,000 Americans dead in this pandemic and now people in this country are forced to choose whether to believe the president or the nation’s top health experts. Right there from the White House podium in the middle of a pandemic, the President of the United States flatly contradicting his own CDC Director over exactly when Americans will get a vaccine. The president insisting it could be as soon as next month. But the CDC Director testified under oath on Capitol Hill, the earliest most people would get it would be mid to late next year.

TRUMP: It's just incorrect information and I called him and I think he got the message maybe confused. Maybe it was stated incorrectly. No, we're ready to go immediately.

TRUMP: I don't think he means that. I don't think -- when he said it, I believe he was confused. I'm just telling you. We're ready to go as soon as the vaccine happens.

REDFIELD: You're asking me when will it be generally available to the American public so we can begin to take advantage of the vaccine to get back to our regular life, I think we're probably looking at third -- late second quarter, third quarter 2021.

VEGA: But from President Trump --

TRUMP: He just made a mistake. I think he misunderstood the question probably. I got the impression he didn't realize he said what he might have said.

VEGA: And overnight it got even more chaotic. A CDC spokesman issued a statement saying Dr. Redfield did indeed misunderstand the question. But then 40 minutes after that the spokesman retracted that statement and the contradictions did not end there. In his testimony, Redfield also called masks the most important public health tool we have.

REDFIELD: I might even go so far as to say that this face mask is more guaranteed to protect me against COVID than when I take a COVID vaccine.

VEGA: But when the president was pressed on that--

TRUMP: It's not more effective by any means than a vaccine and I believe that if you ask him, he would probably say that he didn't understand the question.

VEGA: So we did ask and the CDC said in a statement “masks are among the best defense we currently have against this virus.” Joe Biden zeroing in.

BIDEN: We can't allow politics to interfere with the vaccine in any way. So let me be clear, I trust vaccines. I trust the scientists but I don't trust Donald Trump.

VEGA: Okay, here is where we stand. These are the facts. Multiple experts, top scientists including those working on this vaccine right now say it is extremely unlikely that a vaccine will be ready for widespread distribution in time for the election in November. In addition to the vaccine not being ready yet there are questions about whether it is ready to even be distributed on a large scale. Yesterday on the hill, Dr. Redfield said that the scientific integrity of the CDC had not been compromised by politics, George. There are serious questions about whether that is actually the case this morning. 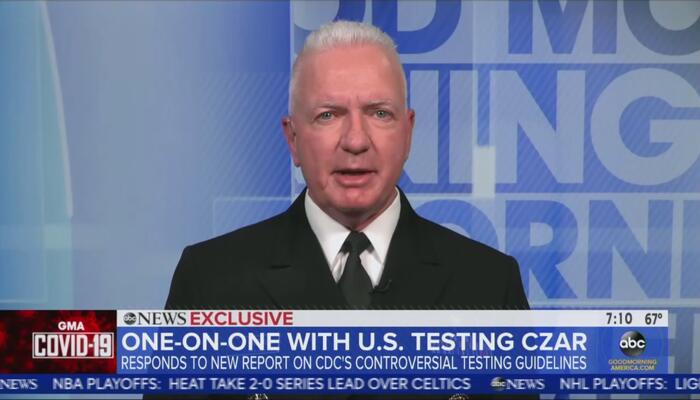 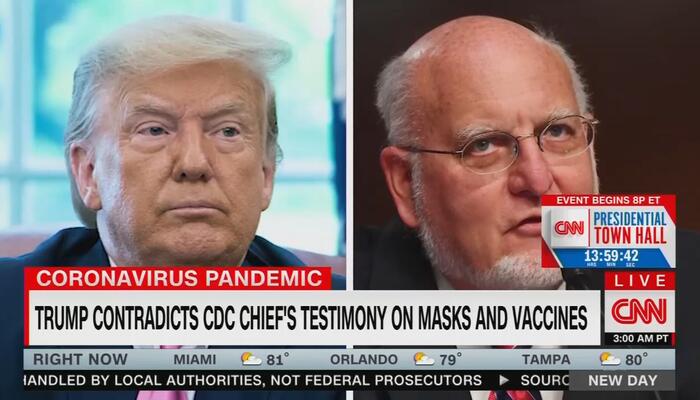 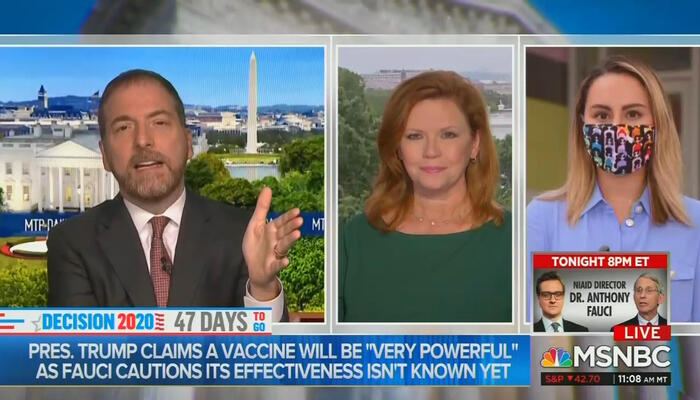 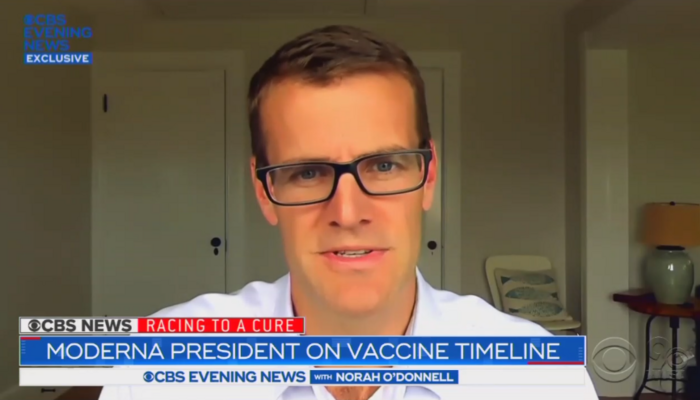 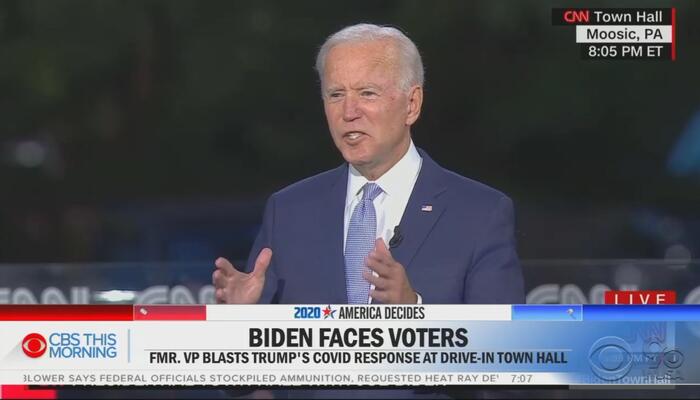 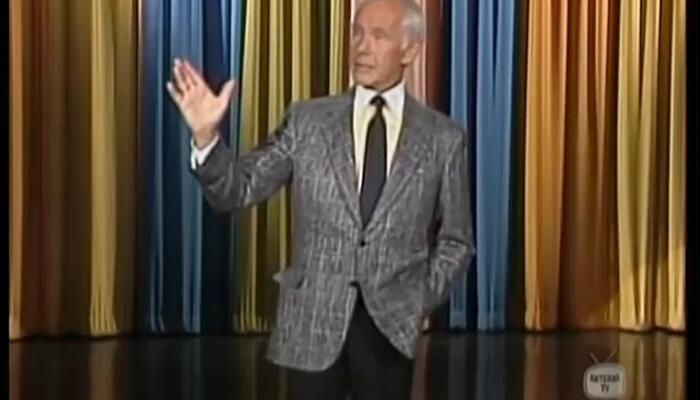 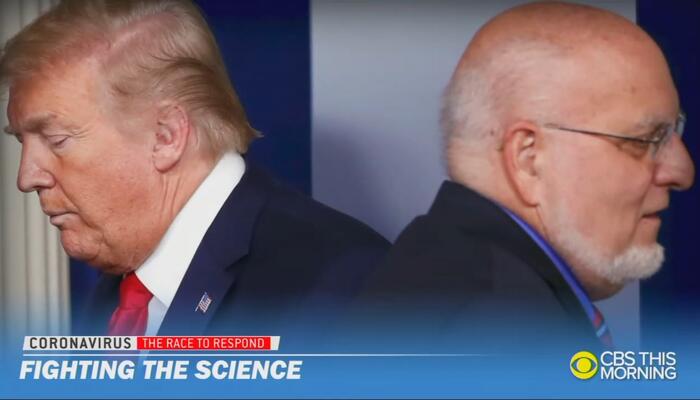 CBS: Trump ‘at War With Scientists,' ‘Fighting the Science’