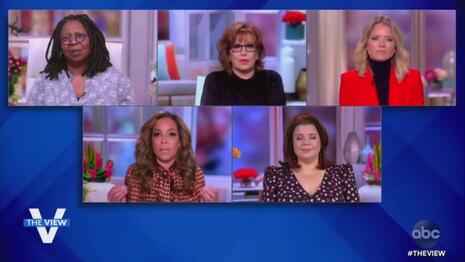 The hosts of The View slammed President Trump for releasing the CBS interview he did with 60 Minutes’ correspondent Lesley Stahl yesterday, before it airs on television this Sunday, because it exposed how biased the journalist was. However, the liberal hosts claimed they saw nothing wrong with the interview and the only thing they saw wrong was how Trump behaved.

Of course the hosts completely avoided talking about the most important part, where Stahl repeatedly denied the corruption scandal surrounding Biden and his son Hunter.

Co-host Ana Navarro claimed the interview actually made Stahl look good and Trump gave her a “gift.” To leftists like Navarro, the media abdicating their responsibilities as journalists to act as left-wing hacks only affirms their credibility. She slammed Trump for acting like a “colicky baby with a persecution complex:”

ANA NAVARRO:  Right. Just like when he tweets out against a book somebody writes. That's the best thing he could offer. It's for Lesley Stahl and CBS. I watched the entire interview yesterday that he released, 30 something minutes. I didn't see what the big deal was. He really is complaining about nada. He's, like, a colicky baby with a persecution complex and paranoia, you know, it's funny because they love to attack people as being snowflakes and I'm looking at this interview thinking, dude. Who's the snowflake here? It's not Lesley Stahl….

“He also starts the interview saying, when she says, 'are you ready for some tough questions?' He said, ‘no.’ So maybe we got what he warned us about,” she mocked. Does Haines think this hostile CBS interview or his NBC town hall or his ABC town hall were walks in the park? Meanwhile Trump's opponent literally hides in his house from the media.

Whoopi Goldberg also pretended like she didn’t understand why he released this clip:

“Well It's crazy. I don't know he would release it -- why do you think he did that, Sunny? Because is he trying to get back at CBS to punish them? I mean, what's the -- what do you think that's about?” she asked Sunny Hostin.

Not once in this entire segment did the hosts bring up the president calling out the reporter for protecting Biden from his corruption scandal. Stahl outright denied there even was a scandal, despite mounting evidence and corroboration. Her colleague at CBS, John Dickerson even bragged about how the media was avoiding this story on CBS This Morning today.

Sunny Hostin agreed with Navarro that the interview "backfired" on Trump before slamming Trump as responsible for over 200,000 Americans dying from the virus:

There have been studies, and he just refuses to take any responsibility, and there's a report that just came out by Columbia [University] that said had he handled it better, it could have saved up to over 200,000 lives. Those people that are saying he's not responsible for the death of 200,000 plus Americans, well, he is because he mishandled this pandemic, and that was just woefully-- it was just so clear when you watched the 37 minutes. Just that little clip. I -- I think that everyone's going to tune in and see that.

The study she referenced claimed that less than 3,000 Americans would’ve died if we had followed what South Korea did. That would only be a fraction of the number of Americans who die every year from the less lethal seasonal flu which seems highly unlikely. But despite scientists being wrong at the beginning about how many Americans were projected to die from COVID-19, the media will still tout these alarming hypothetical projections to blame the president for a global pandemic...and avoid talking about Biden's scandal.

The View protecting journalists from having to investigate Joe Biden's corruption scandal was paid for by advertisers Olay and Carvana which you can contact at their Conservatives Fight Back Page.