We Called It! Guthrie Flipped Out on Trump, Railed from the Left 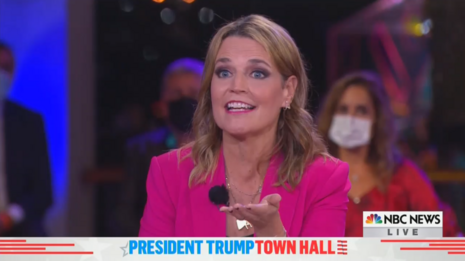 On Thursday morning, NewsBusters deputy research director Geoffrey Dickens predicted that NBC's Today co-host Savannah Guthrie would “go nuts on [President] Trump” in the town hall later that evening. And he was spot on with his prediction as she directed 25 liberal questions, comments, and other such biased interactions at the President.

Not only did Guthrie have more interactions with Trump (compared to ABC chief anchor George Stephanopoulos having 19 with former Vice President Joe Biden in his concurrent town hall), but they also drug out as the town hall would devolve into a debate and even some shouting matches.

Whereas ABC began the program with an audience question, Guthrie didn’t get to the audience for almost 20 minutes as she prioritized battling with the President.

After asking Trump about his health and trying to nail down when he took a coronavirus test before the last debate, Guthrie berated and lectured him about wearing masks and hold rallies. “No one that says you can't be out there, but it's just about wearing masks and having -- For example, your rallies! Your rallies don't require masks,” she shouted. “But as President, you're right, you want to be a leader, but you also are a leader and a setter of an example.”

Guthrie utterly embarrassed herself when she picked a fight with Trump over his denunciation of white supremacists, despite how he’s done it multiple times, and harkening back to the first debate. “You always do this. You've done this to me,” he lamented as he proclaimed: “I denounce white supremacy. Okay?”

As Trump denounced them again and called out her NBC colleague Lester Holt for not pestering Biden about Antifa in their October 5 town hall, Guthrie ridiculously accused Trump of trying to “dodge” her question, and he called her out (click “expand”):

TRUMP: I denounced white supremacy for years. But you always do it. You always start off with the question. You didn't ask Joe Biden whether or not he denounces Antifa. I washed him on the same basic show with Lester Holt and he was asking questions like Biden was a child.

GUTHRIE: Well, this is a little bit of a dodge.

TRUMP: Are you listening? I denounce white supremacy. What's your next question?

GUTHRIE: Do you feel-- It feels sometimes you're hesitant to do so. Like you wait a beat.

After duking it out with Trump for almost 20 minutes (and something the rest of the liberal media demanded of her), Guthrie finally got to the first audience question. And, of course, it was hostile. “Why did you only put in place a travel ban from China and not put in place other measures mitigating the spread of COVID-19, potentially saving tens of thousands of American lives,” the woman asked.

In one of their other contentious scuffles, this one exchange over negotiations for a coronavirus relief package, Guthrie chided him as “the big deal maker” who wasn’t getting anything done while people suffered. Trump fired back by accurately pointing out that Speaker Nancy Pelosi (D-CA) was the one rejecting every offer:

TRUMP: Did you ever hear of a word called negotiation? We're negotiating, okay?

GUTHRIE: But people's lives are hanging in the balance.

TRUMP: You know what, and you know who I'm negotiating against, Nancy Pelosi, because she doesn't want to give the money.

One of the only two right-leaning questions came from a former Hillary Clinton voter who had recently fled the Democratic Party. “What do you say to those Americans to maybe tell them why you want the corporate tax rate lower and why that helps them,” she asked the President to explain.

On a side note, Politico’s Marc Caputo wrote hours earlier that NBC had hired an outside firm to stock its audience. This served as a private admission by the network that their Biden town hall was an abject failure in selecting audience members.

Savannah Guthrie’s knock-down-drag-out brawl with President Trump was made possible because of lucrative sponsorships from T-Mobile and Norton Antivirus. Their contact information is linked so you can tell them about the biased town hall they funded.