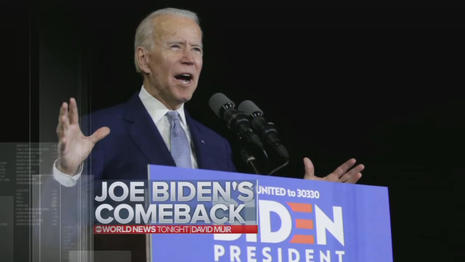 If you thought the media were severely slanted against Donald Trump in 2016, an early read on network evening news coverage of the 2020 race shows the networks are taking an even more hostile approach this time.

Looking at coverage from March 4 (after former Vice President Joe Biden essentially locked up the Democratic nomination on Super Tuesday) through May 31, our analysts found the ABC, CBS and NBC evening newscasts have minimized or ignored controversies involving Biden, even as they pounded President Trump with the worst press of his presidency.

The Media Research Center tallied 474 evaluative comments about President Trump during this period, the vast majority of which (445, or 94%) were negative. (Read about our methodology at the end of this article.) The tone of Trump’s coverage became more hostile over the course of these three months (during which network news was consumed by the coronavirus pandemic): 87 percent negative in March; 92 percent negative in April; and a (so far) record-breaking 99.5 percent negative in May.

In contrast, our analysts found only 85 evaluative comments about former Vice President Biden during these same months, 39 percent of which were positive vs. 61 percent negative. 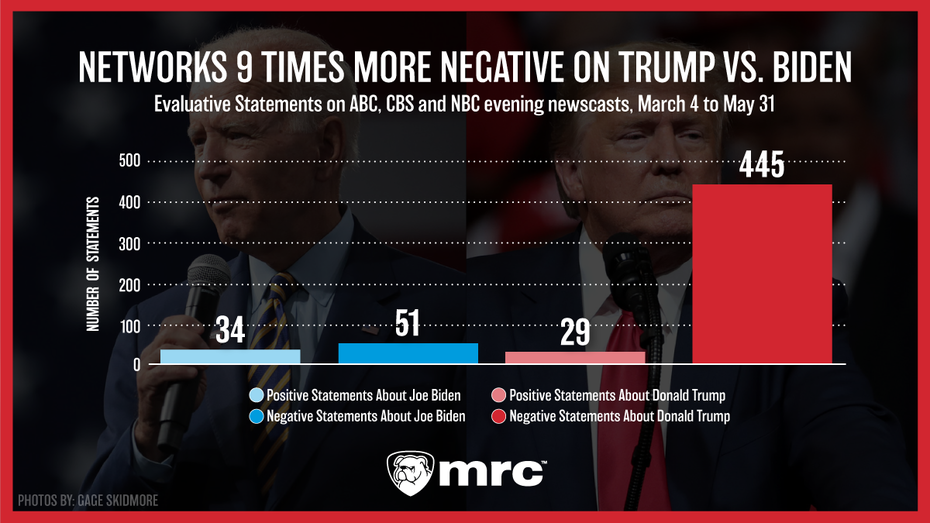 Reflecting the networks’ aggressive focus on the President, Biden also received only 75 minutes of evening news coverage, roughly one-seventh what Trump received (523 minutes). Biden’s biggest scandal, the allegations from former staffer Tara Reade that he sexually assaulted her in the 1990s, received only 23.5 minutes of coverage. That’s even less airtime than the 28.5 minutes these same shows spent in 2019 discussing far less serious charges that Biden made several women uncomfortable with non-sexual touching.

The evening newscasts also barely touched Biden’s racial gaffe in May (telling a radio host that if people can’t decide whether to vote for him or Trump “then you ain’t black”), giving it just three minutes, 16 seconds of airtime. That’s significantly less than the 13 minutes of coverage Biden received in 2019 for another racial gaffe, as he reminisced about the “civility” that allowed him to work with segregationist Senators James Eastland and Herman Talmadge in the 1970s.

News that Biden, in his last days as Vice President, requested the “unmasking” of incoming Trump National Security Advisor Michael Flynn, was essentially ignored: It drew a mere 62 seconds of evening news coverage (55 seconds on ABC, seven seconds on CBS, and nothing at all on NBC).

Four years ago, our analysis of the final 12 weeks of the 2016 campaign showed a similar pattern: the networks downplayed most of the controversies involving Democratic nominee Hillary Clinton as they spent most of their time on candidate Trump. While Clinton’s press was by no means favorable, the networks churned out four times as many negative comments about Trump as his opponent (623 vs. 145).

This time, those same networks are currently delivering nearly nine times as many negative comments about Trump as Biden (445 vs. 51). The overall skew in Trump’s coverage is also more pronounced than it was four years ago (91% negative in 2016, vs. 94% in the past three months, including 99.5% in May).

It’s earlier in the 2020 cycle, of course, but the trend we’ve documented during the past four years appears unaffected by the emergence of a likely Democratic presidential nominee: The media have anointed themselves as the principal voice against this President, and their coverage is organized around hammering home their critique of the day.

But if it’s the liberal media vs. Trump for the rest of the campaign, the Democratic candidate would seem to benefit from the lack of scrutiny. On May 26, Biden himself chortled to CNN’s Dana Bash: “All the stuff about ‘Biden’s hiding,’ you know, the fact of the matter is it’s working pretty well so far.”

Methodology: For this report, MRC analysts reviewed every mention of President Trump and former Vice President Biden from March 4 through May 31, including weekends, on ABC’s World News Tonight, the CBS Evening News and NBC Nightly News. To determine the spin of news coverage, our analysts tallied all explicitly evaluative statements about Trump or Biden from either reporters, anchors or non-partisan sources such as experts or voters. Evaluations from partisan sources, as well as neutral statements, were not included.