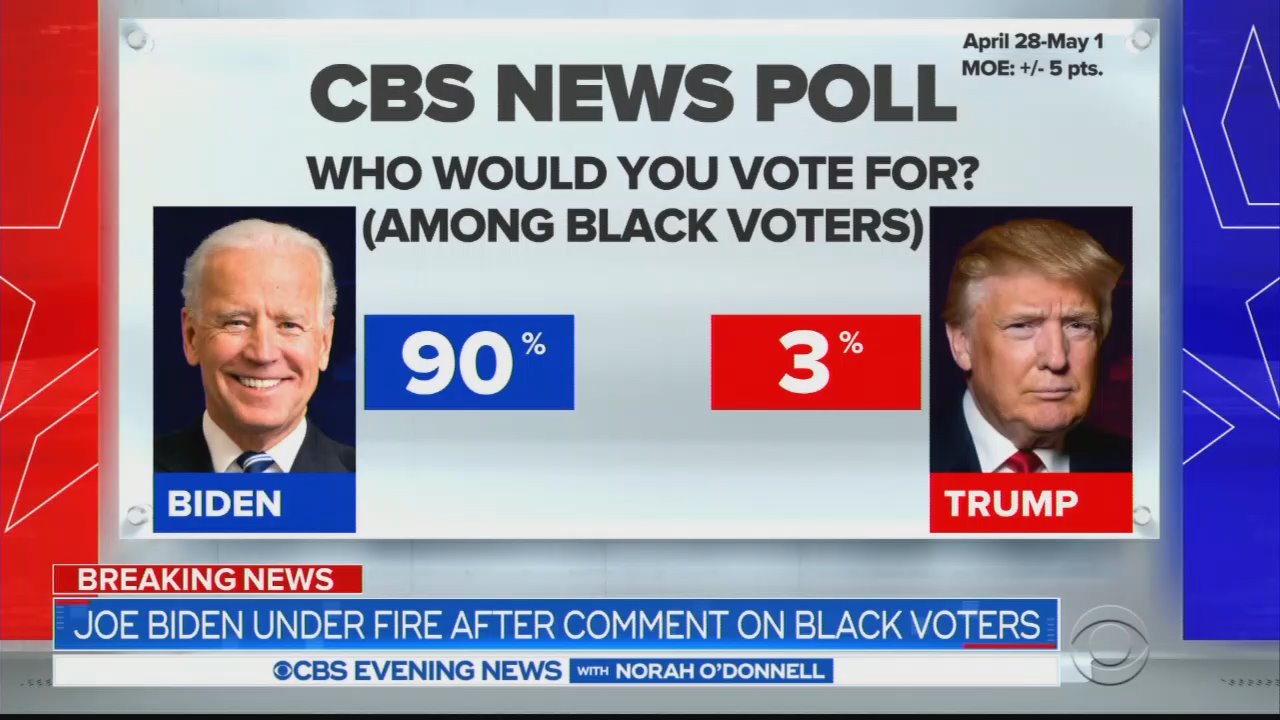 ABC, CBS, and NBC all covered Joe Biden’s gaffe on Friday night, suggesting on the radio show of rapper “Charlamagne Tha God” that if you aren’t supporting him for president, “You ain’t black.” Between the three evening newscasts, there was 187 seconds of coverage, or about a minute each. ABC and CBS turned to political reporters, but NBC anchor Lester Holt dismissed the whole thing in 21 seconds.

By comparison, when the story broke on September 17, 2012, that Republican presidential nominee Mitt Romney said he would never convince 47 percent of the electorate to vote for him, the same Big Three networks gave than almost an hour and a half over three full days (1 hour, 28 minutes, 23 seconds).

ABC and CBS both “balanced” Biden’s gaffe with bad news for Trump. ABC’s Mary Bruce ran down a list of Trump’s apparently racist statements, and CBS’s Ed O’Keefe dragged out their polling showing Biden was winning black voters by a score of 90 percent to three percent.

As Fox News reported, CNN waited 12 hours on Friday to notice the story, until CNN host Erin Burnett interviewed Charlamagne at the end of her 7 pm hour. MSNBC and Fox News covered the story all day long. MSNBC’s black journalists and analysts, from Trymaine Lee to Rev. Al Sharpton, were critical of a white man judging blackness, but CNN just couldn’t muster itself.

PBS NewsHour gave the Biden controversy about 2 and a half minutes during their Shields and Brooks Week in Review segment, but that was a small piece of their 13-minute discussion, which was typically loaded with Trump-bashing.

NPR’s All Things Considered at least considered Biden’s remark in a five-minute segment with two of their political reporters. Anchor Mary Louise Kelly summed up that “Biden's approach through the campaign so far has not been about stirring up, firing up the base of the Democratic Party. He's tried to present himself as a centrist, as the unifying candidate.”

Here are the transcripts:

LESTER HOLT: Former vice president Joe Biden is apologizing tonight for a comment he made on a popular talk radio show. Biden said if black Americans have a problem figuring out whether to vote for him or Donald Trump, then quote, “you ain't black.“ The comment sparked a firestorm on social media. Biden later called his remarks really unfortunate and cavalier.

TOM LLAMAS: Next to the race for 2020. Presumptivive democratic nominee Joe Biden apologizing tonight after what he said about black voters prompted a firestorm. The former vice president tonight saying he shouldn't have been so cavalier. Here's Mary Bruce.

MARY BRUCE: Tonight, Joe Biden is doing damage control after he sparked outrage with this message for black voters.

JOE BIDEN: If you have a problem figuring out whether you're for me or trump, then you ain't black.

CHARLEMAGNE THA GOD: It don't have nothing to do with trump, it has to do with the fact that I want something for my community.

BIDEN: Take a look at my record, man.

BRUCE: The reaction swift and furious. This from the senate's only black Republican.

BIDEN (in phone call): The bottom line of all this is perhaps I was much too cavalier. I know that the comments have come off like I was taking the African-American vote for granted, but nothing can be further from the truth. I shouldn't have been such a wise guy.

BRUCE: His campaign notes Trump has a long history of racially charged comments. Sources say Trump has used expletives to describe African nations. He told four congresswomen of color to go back to the countries they came from. And he perpetuated the false theory that Barack Obama was not born in America.

NORAH O’DONNELL: Tonight, Joe Biden is expressing regret over a comment he made earlier today on a popular radio show about support from black voters. CBS's Ed O'Keefe reports.

ED O’KEEFE: Reporter: Joe Biden is on the defensive tonight after making the racially insensitive comments.

JOE BIDEN: It's really unfortunate. I shouldn't have been so cavalier.

BIDEN: If you have a problem figuring out whether you're for me or Trump, then you ain't black.

CHARLAMAGNE THA GOD: It don't have nothing to do with trump. Has to do with the fact I want something for my community.

JOHN JAMES: Do you really believe a black person who does not vote for you is not legitimately black?

JOEL PAYNE, CBS News political contributor: His greatest strength is being a gut, off-the-cuff politician, and in this moment it really jumped up to hurt him.