ABC Admits Others ‘Rushed to Judgement’ on Catholic Teens Viral Vid, Ignores They Did Too 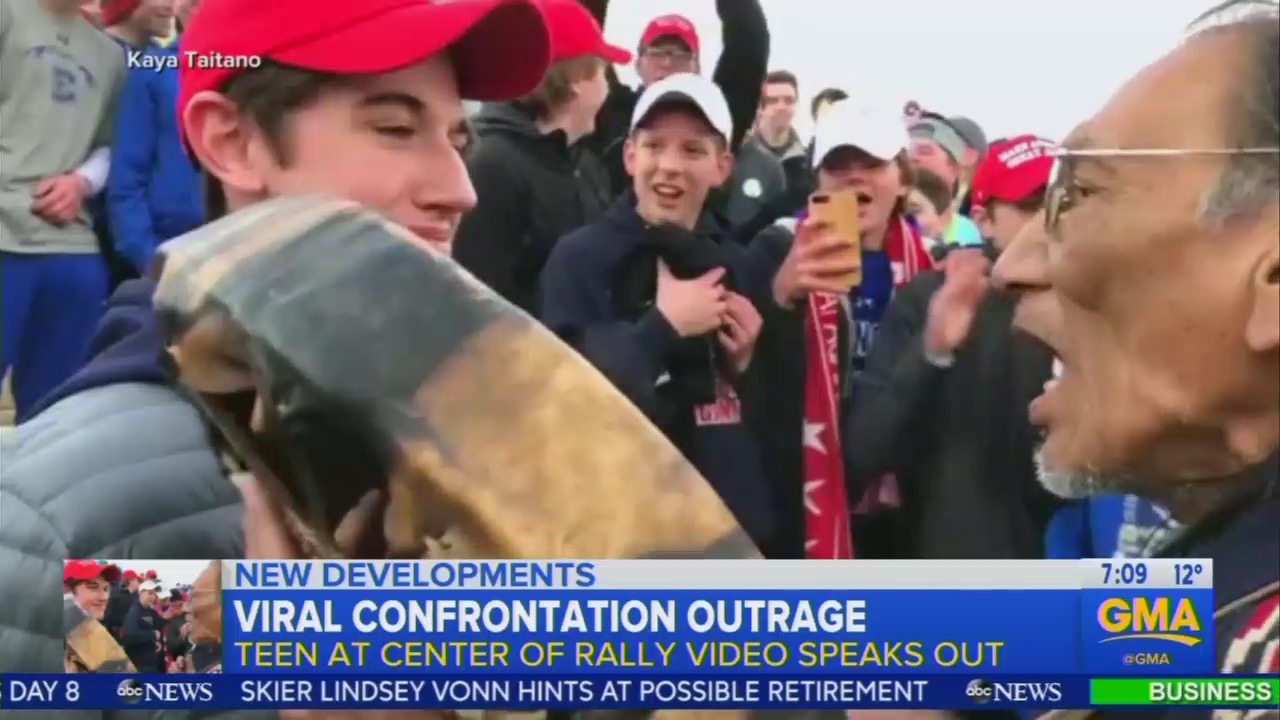 ABC’s Good Morning America admitted Monday that the incident at the March for Life that went viral appearing to show Catholic teens in MAGA hats sneering at a Native American veteran, was taken out of context. However, ABC failed to acknowledge that their own network also slandered these kids with their hasty reporting based off of on one viral video.

On Monday, ABC’s Cecilia Vega led into the report noting the original video released over the weekend had “quickly sparked outrage online” but that another video was “raising new questions about what really happened before the incident.” Vega didn’t note that their own network helped spark that outrage, when This Week host Martha Raddatz tried to shame Republican Senator James Lankford into condemning the Catholic, pro-life teens wearing “Make America Great Again” hats as racists.

Reporter Erielle Reshef’s report updated viewers noting that the Covington High School teen pictured in the video, Nick Sandmann, had come out with a statement to the media defending himself as well as saying he meant the man, Nathan Phillips no harm. Reshef noted additional videos showed, “A separate group of protesters” were “hurling slurs at the young Kentucky students who had gathered at the March for Life,” while the network played additional video clips of people chanting at the teens racist phrases like, “White people go back to Europe,” and “a bunch of future school shooters!”

Reshef ended the segment noting the teens’ school had originally come out condemning them, even promising expulsion if necessary after an investigation into the incident. Anchor George Stephanopoulos seemed to rebuke the school’s response as rash, ignoring the fact that the media had basically demanded this response with their own witch hunt reporting:

GEORGE STEPHANOPOULOS: This is such a cautionary tale. I have to say, I saw the first image on Saturday morning. It seemed absolutely outrageous. But it shows what you can do with editing footage. This was a much much more complicated story. It appears, at least, this young man was trying to do the right thing in some measure. Maybe he didn't do it perfectly, but trying.

RESHEF: There was definitely a rush to judgment by a lot of people. I think it's a teachable moment in our country and about the fact that our country is so polarized right now.

ABC left out some of the profanity-filled phrases hurled at the teens, but CBS This Morning showcased them in their report, Monday. CBS also came out wringing their hands about the rush to judgement against the boys. However anchors Bianna Golodryga and Gayle King refused to acknowledge that so far none of these allegations of racism asserted by all three networks and the online mob against the boys have proven to be true.

GAYLE KING: All the videos are disturbing on all sides. Everything I see. Just very upsetting to me.