On ABC's This Week, host Martha Raddatz began the program with Democrat presidential aspirant Kirsten Gillibrand, but never asked her a single question about the Women's March controversies over anti-Semitism, even though she spoke on Saturday at a Women's March event in Des Moines. The ABC host's toughest question needled Gillibrand from the hard left about once being too tough on illegal immigrants.

RADDATZ: You’ve been facing scrutiny for past statements about immigration. When you were a member of the House, you called securing the border a national security priority, you voted to increase for ICE and you opposed amnesty for undocumented immigrants. I know you’ve said you were embarrassed about those statements but are you confident Democratic primary voters believe you?

Washington Post reporter Dave Weigel underlined on Thursday that while Gillibrand's staff offered a statement of generic opposition to anti-Semitism, "Gillibrand has never distanced herself from the national organization." Women's March organizer Winnie Wong added “Senator Gillibrand has been an ally to us and a leader on a number of fights."

But Raddatz pressed Sen. Jim Lankford (R-Okla.) to denounce a viral video that alleged to show Catholic teenagers in MAGA hats harassing a Native American man beating a drum...she even blamed this alleged hate crime on Donald Trump's tone against Sen. Elizabeth Warren, who inaccurately claimed to have Cherokee ancestry:

RADDATZ: And senator, I want to end here by showing you a video that's gone viral this weekend: teenage Trump supporters taunting a Native-American veteran at the end of the Indigenous People's March here in Washington. Your state has one of the highest Native American populations. What's your message to those teenagers? And has the president created this environment doing things like calling Elizabeth Warren Pocahontas?

LANKFORD: Well, I would say a couple of things about the video. One is obviously that young man is standing awkwardly close to someone, that doesn't seem natural to be able to have that. I don't see him taunting him. I see him just standing there staring at him. I would there are a lot of rallies that I have seen...

RADDATZ: You don't think that would be intimidating to have that teenager? 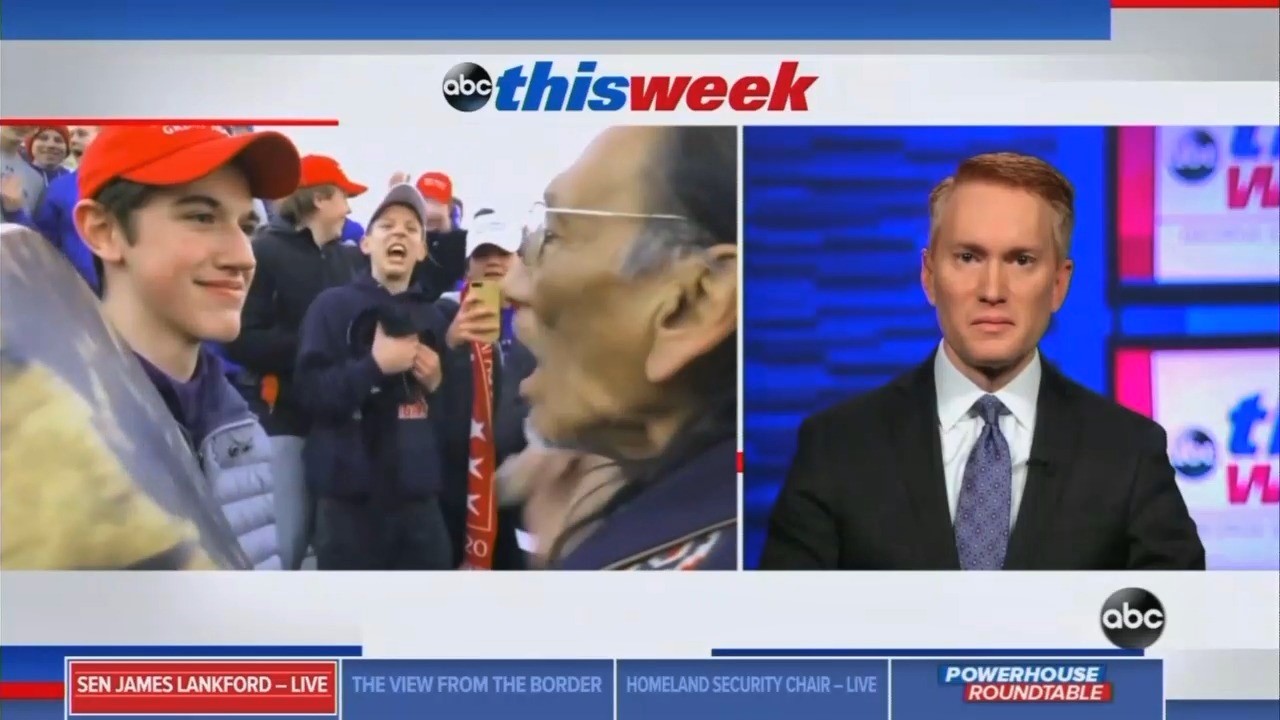 LANKFORD: Well, certainly I do. No, no. Certainly I do, and I wasn't trying to say that, I was saying that is intimidating, he's standing awkwardly close to him, but I have seen lots of rallies and events where I have seen individuals yelling and screaming in people's facing and trying to be able to intimidate them. So, I have seen a lot worse than that. That is highly disrespectful not only to a Native American gentleman, but any older gentleman for a teenager to do that.

The key issue that I would say is in our culture for whatever reason, in our current culture, whether it's on social media whether it’s at events, I see people trying to stop hate with more hate. That doesn't help us as a culture. If there's anything we should have learned from Martin Luther King Jr. is hate doesn't drive out hate, only love drives out hate.

Emerging video demonstrates who instigated this culture clash. The Indian activist waded with his drum right into the middle of the MAGA teens. The conservative website Information Liberation has compiled all the hot takes and video perspectives of this viral event. Timothy Meads at Townhall is also on the case. Even pseudo-conservative New York Times columnist David Brooks is walking away from the Raddatz "hot take" from the Left:

Yesterday I had one impression of the maga kids from Kentucky. Now after seeing more videos I have a different more complicated impression. Makes all the hot takes seem silly.