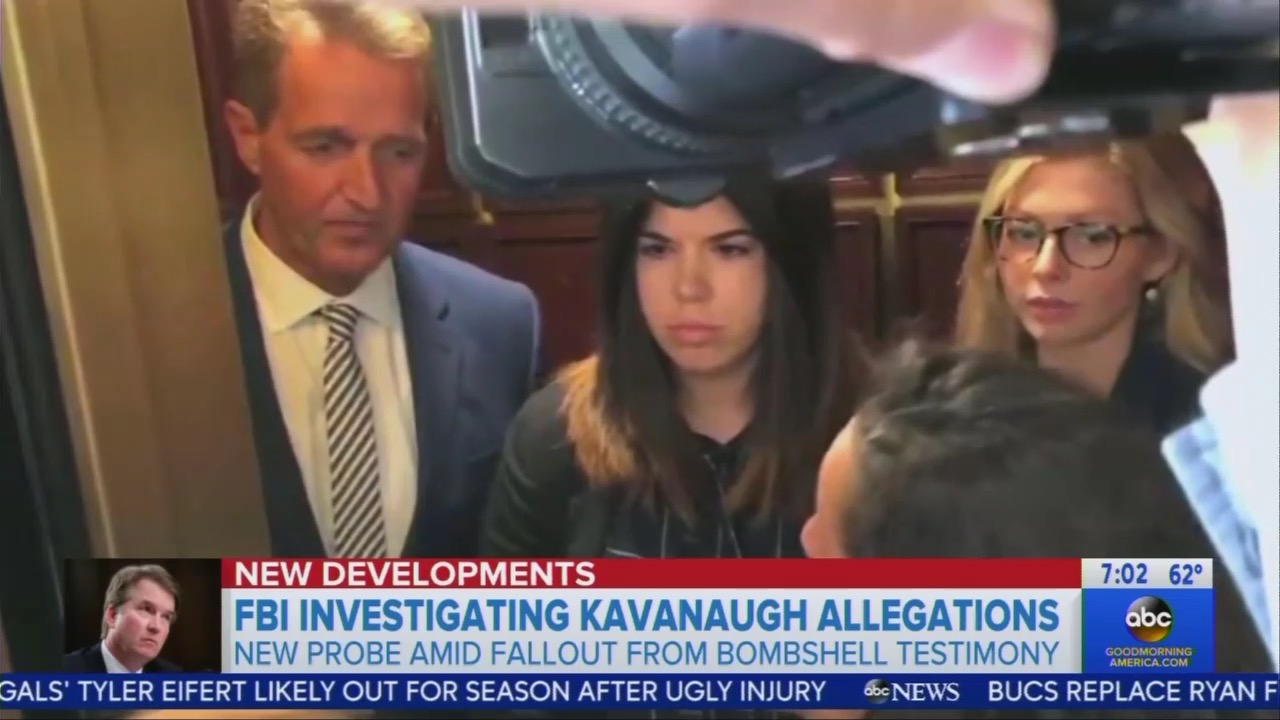 Monday morning ABC and CBS reported on the two women who cornered Republican Senator Jeff Flake on an elevator as he was going to the Judiciary Committee vote to confirm Supreme Court Justice nominee Brett Kavanaugh. While CBS This Morning briefly mentioned one of these women, Ana Maria Archila, was a liberal activist, ABC’s Good Morning America completely avoided that fact. Both networks joined the rest of the media in hailing Archila as a “hero” and “survivor” instead of a partisan with a politically motivated agenda.

On GMA Monday, correspondent Mary Bruce briefly mentioned the incident, but did not identify Archila’s politics. Instead she simply called the liberal activist a “protester:”

This tough confrontation between a protester and Republican Senator Jeff Flake set the wheels in motion for that surprise deal. The protester begging him to hold out for an FBI investigation into Judge Kavanaugh.

But on the weekend edition of Good Morning America, the network spent more time on the story, even having Archila on the program with anchors Paula Faris and Dan Harris, who credited her with “swaying” Flake’s decision to give Democrats what they wanted by delaying the full vote.

Calling her a “survivor of sexual assault” and a “tearful woman,” Faris completely avoided mentioning Archila was a radical liberal activist for a Soros-funded group. She only asked Archila three questions, ending the interview by asking if she would be persuaded by the FBI investigation results, even if they cleared Kavanaugh’s name. But even after Archila blatantly admitted that nothing would change her mind on Kavanaugh, Faris didn’t press her on her bias, only referring to her an “activist” for sexual assault victims. The two ABC anchors ended the interview by gushing about how great it was that she was able to get Flake to side with the Democrats:

FARIS: As you said you'll continue to fight and you’ll continue be an activist and for so many in the country you'll continue to be a hero. It just goes to show the power of showing up, looking your senator in the eye and expressing your concerns and that’s what can happen.

But Archila was just doing exactly what ABC wanted. Anchor George Stephanopoulos even admitted as such, in an interview with Jeff Flake in July, where he asked the Senator if he would be willing to punish President Trump by blocking his Supreme Court pick.

CBS This Morning also had her on their show, Monday, introducing her as an “activist and co-executive director for the Center for Popular Democracy, a liberal advocacy [group] based in New York City.” But that was the last mention of her political bias, before the gushy interview that followed. CBS also repeatedly referred to her before this interview and afterwards as a “sexual assault survivor,” a “protester,” and positively as the “woman” who’s credited with getting Flake to call for delaying the vote.

NBC’s Today show did not mention the elevator incident on Monday’s show.