April Ryan on DeSantis: 'Hypocrisy,' A Democrat Would Never Get Away With 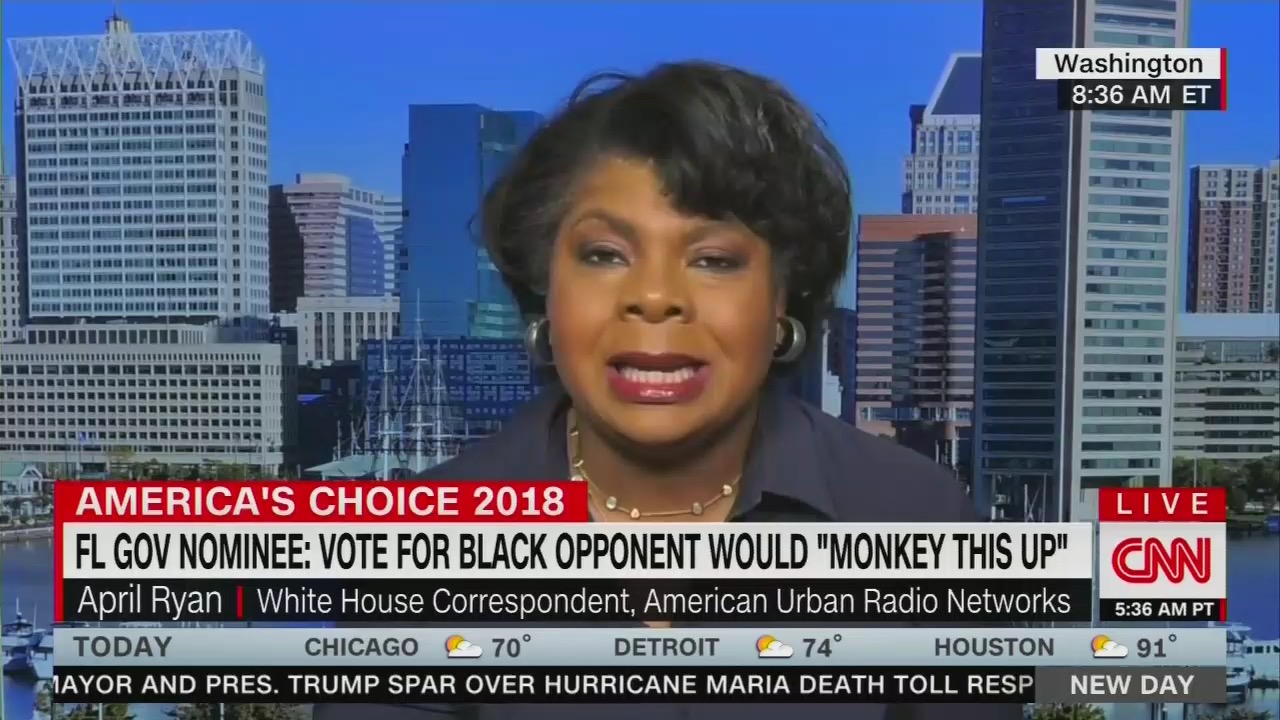 CNN analyst and White House correspondent for American Urban Radio April Ryan added to the media pile on of Republican nominee for governor of Florida, Ron DeSantis, after he made an insensitive remark discussing his Democrat opponent’s liberal policies. The media seized on the gaffe Thursday morning, claiming it was a clear racist “dog whistle” that can be attributed to President Trump. Ryan herself slammed the Republican’s “mansplaining” on CNN’s New Day and bemoaned the lack of “political correctness” in today’s culture.

New Day host John Berman played the clip of DeSantis asking voters to not ““monkey” “up” their state’s good economy by voting for a candidate who would enact policies antithetical to its success. The problem is, DeSantis’s opponent, Mayor Andrew Gillum, is black, and that word has a history of being used as a racial slur. DeSantis’s campaign denied the phrase was meant to convey racism and was solely about Gillum’s policies. Regardless, CNN spent most of Thursday obsessing over the gaffe.

To Ryan, Berman propped up the easy dunk, asking, “A of people say they see racism in that. Did you?”

Ryan didn’t disappoint. “Yes. Most definitely. It was not by mistake or happenstance or coincidence. This was a strategically placed word,” she claimed, before blaming the incident on President Trump, saying he ordered DeSantis to appeal to racist voters:

Back decades ago -- you know -- people used to refer to African Americans in so many derogatory terms and Desantis is trying to harken upon on his president's code words and dog whistles to get those people who don't like the fact that you have an African-American who could become the governor of this red state. You know, he wants them to come out and he gave a dog whistle to them and his apology could be -- you know -- tongue in cheek, turn your eye -- turn your head, close an eye and and say 'oh I'm sorry but you know I said this.' So it's definitely racial.

“He didn't apologize, to be clear, he didn't apologize at all,” Berman added, complaining it was just like Trump: “That's out of the Trump playbook...He's never apologized for all of the controversial things he’s done,” he gushed.

Ryan lamented that by denying his statement was racist was akin to “mansplaining.” She went on to gush that what was wrong with politics today was the lack of political correctness:

The campaign or Desantis can say ‘this is not what I meant’ and to change it from saying that ‘I said it, but this is the way’ - you know, the man speak, the mansplaining, ‘Well I said this but this is what i meant,’ and in a sense their kind of apology but you're right, it's not. He said it.

In 2018 we have been through all sorts of issues. We know what is on the table and we know what to say and what not to say. We are in a time when political correctness is thrown out the window and this is wrong. This is wrong.

Ryan ended her spiel by claiming that Republicans get away with these flubs with no repercussions while Democrats get martyred for them:

What if the democratic nominee for governor of Florida said something that was racial? You would see a totally different outcry against Gillum versus Desantis so there is hypocrisy here.

Really? Because the media sure seemed to have quote a different reaction to former Vice President Joe Biden calling Obama a “bright” and “articulate African American” politician. (Coincidentally, DeSantis is also drawing fire for the use of the word “articulate” to describe his opponent.)