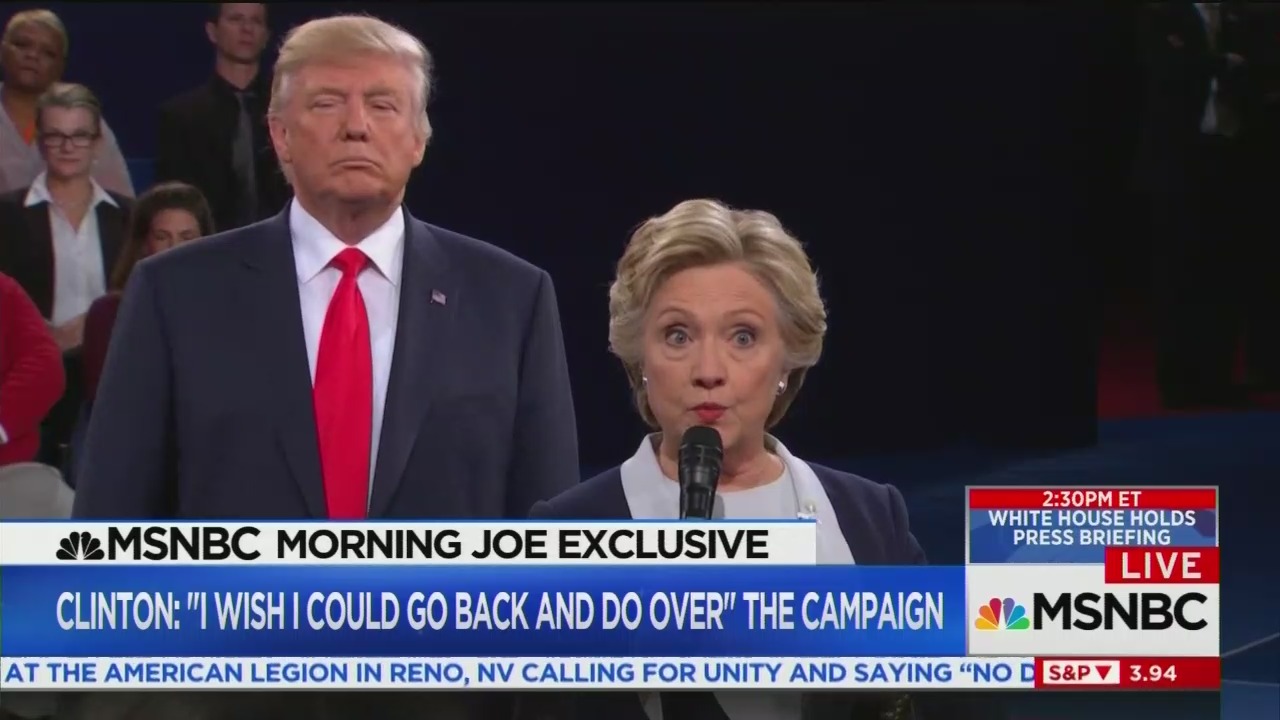 This week the media drooled over Hillary Clinton calling Donald Trump a “creep” in an audio excerpt from her upcoming memoir, where she was referring to Trump standing closely behind her during a presidential debate.

While most of the media wondered if Clinton would’ve been better served if she had called Trump a “creep” in that moment, one feminist writer went so far as to say the incident was a classic case of sexual harassment, and that the media and voters stood by and ignored the victim---Clinton.

Feminist writer Jill Filipovic defended Clinton in her lengthy op-ed for The New York Times Thursday, which desperately tried to connect how Trump followed Clinton around on the debate stage, (which is a debate technique,) to sexual harassment and our sexist society.

“A shameless misogynist” “stalked a woman on stage while we all watched and then he won the election,” Filipovic whined.

She goes on to make an absurd connection between Trump trying to intimidate Clinton during that debate to how men ignore and abuse women in the workplace and in society, and how women feel powerless to do anything about it:

“Mrs. Clinton did what most women do when they face harassment or intimidation: She ignored it. But now she’s stewing in the what-if,” Filipovic stated. She goes on to complain about how women can’t win in our sexist society because whether they say nothing or speak up, they’re always seen as in the wrong, and that’s how Clinton would’ve been seen as well:

Had Mrs. Clinton responded forcefully during that debate, she would most likely have faced the same penalties other women do when they speak up at work: being seen as unpleasant, aggressive and less competent.

Then she got into the psychological speculation, claiming that Clinton threatened Trump’s sense of dominance as a “white male,” something his “racist” voters hated about Clinton as well:

Mr. Trump is more nakedly obsessed with dominance and “winning” than any politician in living memory. And Mrs. Clinton, who seemed poised to become the first female president, threatened not only his ascendancy but also a 200-year-old gender order.

Researchers have found that sexual harassment isn’t about attraction; it’s about gender and power. According to a 2012 study, workplace harassment “can serve as an ‘equalizer’ against women in power, motivated more by control and domination than by sexual desire.” Street harassment isn’t all that different. A survey focused on the Middle East and North Africa found that men harass women in public “to put them in their place,” Shereen El Feki, one of the report’s authors, told NPR. “They feel like the world owes them.”

Mr. Trump sells this same sentiment — you’re owed, you haven’t gotten your due — to his white male base. Onstage at that debate, Mr. Trump responded like a lot of men do when they feel their rightful place of authority is threatened, and an enormous number of male voters (and some female voters) went right along with him.

Her biggest campaign gaffe was calling a subset of Trump supporters — those motivated by bigotry — “deplorables,” a move the Republican Party quickly exploited. Putting aside the fact that Mrs. Clinton was right (a subset of Trump supporters were in fact motivated by racism, and he retains strong support from his base even after equivocating on neo-Nazi violence in Charlottesville), any anger or defensiveness on her part was cast as yelling, shouting and shrill.

Do we really think Mrs. Clinton’s calling Mr. Trump a creep would have been met more positively?

In her article Filipovic repeatedly attacks any criticism of Clinton as sexist:

In the same debate where Mr. Trump lurked and glowered behind Mrs. Clinton, he also interrupted her repeatedly, in another gendered dynamic — men interrupt women, even their own colleagues, more than women interrupt men, but it’s women who are stereotyped as being too chatty. When Mrs. Clinton protested Mr. Trump’s outbursts, he didn’t apologize or back down; instead, he barked, “Because you had nothing to say.

"Mrs. Clinton herself is now engaging in a particularly feminine (and particularly unpleasant) psychological turmoil — the hashing and rehashing of saying too little or saying too much,” she sympathized.

Filipovic is so hung up on how unfair the media and society treated Clinton that she even makes this whopper of a claim:

Really? I can think of one better!

Filipovic’s “what-if” scenario even ridiculously went after ABC’s Martha Raddatz and CNN’s Anderson Cooper for letting Clinton be “harassed in plain view of others.” What if, instead, the debate moderators had told Trump to back off. Would “a different split-second choice could have changed the course of world history?” she incredulously asked:

Campaigns against public and professional harassment have increasingly focused on bystander intervention — that is, encouraging witnesses to harassment to step in. The moderators of the debate, Martha Raddatz and Anderson Cooper, admonished Mr. Trump several times to let Mrs. Clinton speak. Neither of them, though, instructed him to physically back off. And who can blame them? It would have been uncomfortable, and they would have faced accusations of bias. They certainly haven’t publicly wondered, as Mrs. Clinton has, whether a different split-second choice could have changed the course of world history; they haven’t had to stand by while the public wonders for them.

Nor should they. There’s no perfect way to intervene, and intervention often has costs. But for Mrs. Clinton, on that stage, that lack of intervention put her in the same position as so many women who are harassed in plain view of others who do nothing: all alone, second-guessing her own gut reaction.

Filipovic ends her tirade against sexism and the media for electing Donald Trump and ignoring poor neglected victim Hillary Clinton, with this sober scold of society:

He stalked a woman onstage while we all watched, and then he won the election. Now we expect her to be very sorry.

Perhaps it’s not just Hillary Clinton who should be thinking about what she could have done differently.