Monday’s NBC psychic crime drama "Medium" featured a plot line in which an Arizona senator and former POW is discovered to be a two-time murderer and a cannibal. While it is safe to assume that the story was written before the Hollywood writers’ strike, and before the rise of John McCain to front-runner status for the GOP presidential nomination, the blatant use of McCain’s personal history, as a politician and Vietnam POW, as grist to feed the murderous plot is obvious.

In Monday’s episode, titled “Aftertaste”, the medium (“Allison DuBois,” played by Patricia Arquette) suspects an ex-POW Arizona state senator is involved in a murder she sees in her dreams. Through a series of psychic flashbacks, she discovers that the senator (“Jed Garrity,” played by Gregory Itzin), as a young Army captain held by the North Vietnamese, proposed to his cellmates that they kill and eat a dying American soldier rather than starve to death. “Garrity” drew the short straw and committed the actual murder himself by strangling the dying soldier. 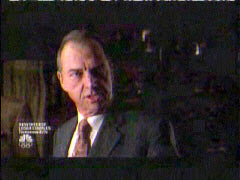 In the present day, “Garrity” and three of his ex-comrades become nervous that another survivor, “Gordon LaRoche,” is going to go to the media and reveal their dark secret, so “Garrity” again convinces the group that they have to kill him. The group kills “LaRoche” and dismembers his corpse, with each burying a piece of him. One of the other men is confronted by police, and confesses that he committed the murder by himself, so “Senator Garrity” is not held accountable, although in the final scene “Allison DuBois” does confront him about his guilt.

When confronted “Garrity” spins the story back to “DuBois” stating that all of the men involved in the murder were actually better men than “LaRoche” because, unlike “LaRoche” they had all made something of their lives, and by so doing honored the “legacy” of the man they ate while prisoners of war. “Garrity” then turns on his heel and goes to give a speech. “DuBois” is left looking completely bamboozled, which is the visual the viewer is left with as well: bamboozled by the Arizona (state) senator and former POW.