Daily Beast political writer Patricia Murphy dutifully peddled Democratic spin on the economy and unemployment while singing the praises of Nevada Republican Senator Dean Heller who led a breakaway contingent of fellow GOPers to invoke cloture on a Democratic bill to extend unemployment benefits without any offsetting spending cuts.

In her January 7 story "The Senate’s Last Compassionate Conservative Tries to Help the Jobless," Murphy quoted heavily from the junior senator from the Silver State and portrayed him as a profile in courage for daring to vote against a position staked out by the reviled (by liberals) conservative advocacy groups:

Heller’s push for the emergency aid makes sense, given Nevada’s 9.3% unemployment rate, the highest in the nation. But his willingness to champion the bill put the former stockbroker on the opposite side of nearly every Republican in Washington, including powerful conservative groups like the Club for Growth and Heritage Action, which announced Monday they would “key vote” against the measure.

His unambiguous push for the aid bill also highlighted the competing visions within his own party of how, and even whether, to help people still struggling in the nation’s uneven economic recovery, even as Washington Democrats push to exploit Republican opposition to aid measures going into the 2014 elections.

On unemployment benefits specifically, most GOP senators said Tuesday they would have supported the bill if the $6.5 billion cost had be paid for with cuts elsewhere in the federal budget.

But Heller and Senate Democrats argued that Congress should extend the aid now and debate how to pay for it later. The emergency program, which began under President George W. Bush in 2008, expired in December, leaving 1.3 million long-term unemployed workers without the $300 per week benefit Congress extended in 2011. According to the Pew Research Center, 38% of unemployed workers have been looking for a job for more than 26 weeks. 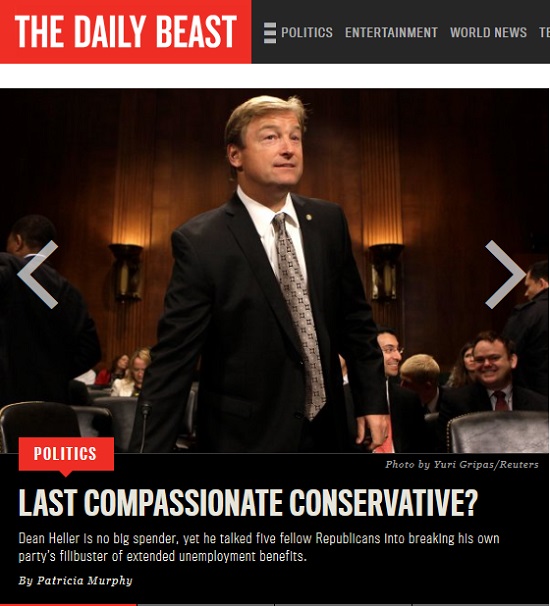 So an "emergency" unemployment benefits extension granted at the height of the 2008 economic downturn is still in effect more than five years later, and this isn't seen as an indictment of President Obama's handling of the economy? What's more, it's incredibly easy to pass a bill spending money now and promising to cut spending elsewhere later, but it's also incredibly naive to believe that's actually going to happen. A skeptical political reporter might focus on the cynical political games being played with the unemployment benefits extension, but Murphy's aim seems rather to promote a political narrative heavy on emotionalistic "do something" appeals that casts Democrats and the stray Republican like Heller as the heroes:

Heller said he heard stories of people choosing to pay for gas or heat or school supplies for their kids.

“These are hardworking individuals who rely on these benefits,” Heller continued. “They are trying to find a job. They want to provide for their children. But for these benefits to simply vanish without giving families them time to plan or figure out alternatives to help them get by to me is just not right.”

Heller’s argument for the bill stood in stark contrast to Republican messages against it. In its warning to senators to vote against it, Heritage Action distributed research that it said showed “so-called emergency unemployment benefits” would actually hurt the economy, by causing higher and longer unemployment.

Several Republicans, including Sessions, took issue with Democrats' characterization of a vote against the bill as evidence of Republicans' heartlessness. The vote, Republicans said, showed they care about the country's long-term economic health, while Democrats just care about the next election.

“It’s not right to just say that the only people who care about American workers and care about the unemployed are those of us who are willing to forget our budget limitations, forget our financial responsibilities and just borrow more and spend more and somehow this is going to fix the problem we are facing,” Sessions said.

Either way, Heller urged his colleagues to help unemployed Americans make ends meet while they continue to look for a job. "It's the right thing to do."

Editor's Note: Our initial headline tagged Heller as a Democrat. Our apologies for the typo.