"The pressure" over the weekend from Virginia Democrats for a northern Virginia business group to reverse its gubernatorial endorsement decision and back Terry McAuliffe was "hot and heavy," in the words of Dendy Young, whose political action committee TechPAC -- the political arm of the Northern Virginia Technology Council -- voted by secret ballot on Thursday to endorse Virginia Attorney General Ken Cuccinelli (R) in the state's governor's race. What's more, in an email State Sen. Janet Howell (D-Fairfax) threatened payback, saying the Senate Democratic caucus would "be frigid" and that "doors will be closed" as a result of the PAC's move.

A story like this is an excellent front-page-worthy scoop. It most certainly would be on the Washington Post's front-page were the tables turned and it was Republicans playing hardball with a group whose endorsement it sought but lost during a close gubernatorial election. But alas, Post editors shuffled the story to page B1, the front of the Metro section, while opting to run a story critical of the Republican candidate -- "Cuccinelli plays down immigration in Va. race" -- on page A1.

Of course, "immigration," a federal issue, gets a grand total of zero mentions on Democratic rival Terry McAuliffe's campaign platform page, but that's of no matter to the Post, which sought to portray Cuccinelli as in trouble with Hispanic voters -- who reportedly account for just 5 percent of the Virginia electorate -- because of the attorney general having "championed," in staff writer David Nakamura's words, "hard-line immigration policies while rising through the state ranks."

Towards the end of his page A1 story, Nakamura did quote a GOP strategist who noted that "neither campaign has been articulating an agenda around immigration" and asked rhetorically, "Is this a question that's relevant to the governor's race?" before answering, "No.... I could give you 10 issues that McAuliffe's taken positions on [as a Democratic Party leader] that he's not bringing up this election."

Still, Nakamura shot back in closing his article,  "immigration could gain more prominence in the race" with "an Oct. 6 forum in Annandale sponsored by Virginia's Hispanic, Asian and black chambers of commerce" where "the issue will be among the featured topics." 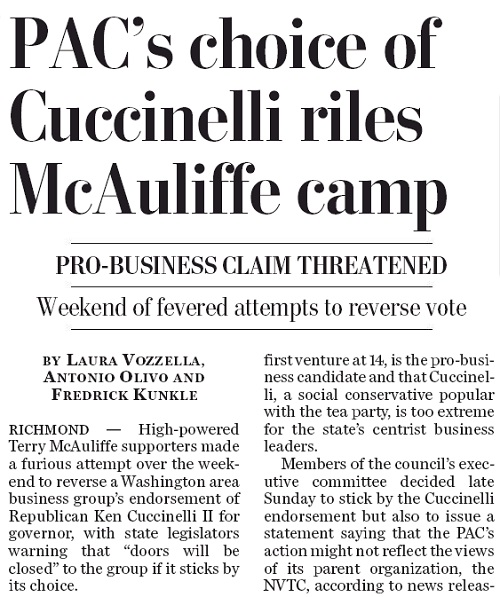 As to the TechPAC endorsement, even as the paper reported the story headline editors oddly couched the story as some grave affront to Terry McAuliffe. "PAC's choice of Cuccinelli riles McAuliffe camp," blared the print edition headline. "Pro-business claim threatened" as"Weekend of fevered attempts to reverse role" noted the subheadlines.

In the digital edition, the headline was similar, "McAuliffe camp erupts over business PAC’s choice of Cuccinelli for Virginia governor."

But deep in the article, we learn that the pro-business political action committee arrived at its decision to endorse Cuccinelli after being impressed by his presentation on the issues. By contrast, McAuliffe seemed ill-prepared and hazy at best on his policies. What's more, the vote for Cuccinelli was arrived at by secret ballot, not some shady backroom deal.These elements of the story all appeared deep in the article by staff writers Laura Vozzella, Antonio Olivo, and Fredrick Kunkle (emphases mine):

Several members of the council said they did not ask questions about social issues but focused exclusively on business and technology matters.

TechPAC endorsed Republicans for governor in the past two campaigns, but some prominent members of the larger council have been so publicly discontented with Cuccinelli that many thought McAuliffe had a shot. Bobbie Kilberg, chief executive of the council, and Gary Shapiro, chief of the Consumer Electronics Association, blasted Cuccinelli in February when he spoke before a large business meeting in Washington.

The endorsement was scheduled to be announced Friday afternoon but was delayed when the McAuliffe camp protested, leading to an intense weekend of lobbying by both sides.

Cuccinelli impressed the board’s majority as a serious, detail-oriented candidate while McAuliffe seemed to wing it, according to three board members present for the interviews who spoke on the condition of anonymity to speak frankly.

Cuccinelli, by contrast, the person said, “was precise. He was thoughtful. He thought through all the issues. He had a clear position on all those issues, and he didn’t agree with the council on all the issues.”

Two people present said that in response to a question about how he’d accomplish his goals as governor, McAuliffe told the PAC board that as an Irish Catholic he’d be adept at taking people out for drinks and doing whatever it takes to get things done. McAuliffe is well known as a schmoozer, but he seemed to badly misread his methodical audience with that answer, several of those present said.

On a question about whether Virginia should stay in something called the “open-trade-secrets pact,” Cuccinelli gave a thoroughly researched response, the person said.

But McAuliffe answered, according to the source: “ ‘I don’t know what that is. I’ll have to look it up later.’ And then he turns back to the guy [who asked] and said ‘Well, what do you think we should do?’ And the guy says, ‘We want Virginia to stay in it.’ And then Terry says, ‘Okay, we will.’ ”

One member said that not everyone came away from the interviews thinking McAuliffe was blase and Cuccinelli better prepared. That member did not dispute McAuliffe’s drinks comment, but said, “You can take 30 seconds out of a four-hour interview and make anything out of it.”

Overall the picture painted of McAuliffe was not very good. No wonder the Post, which will likely endorse McAuliffe -- at worst the paper may decline to endorse in the governor's race -- kept it off the front page in favor of a lame attempt to suggest Cuccinelli is in trouble with voters because of his stands on immigration enforcement.