"When Hillary Clinton testified in January, she got five [and a half] hours on MSNBC," NewsBusters publisher Brent Bozell told Fox News Channel's Sean Hannity on the May 9 edition of his eponymous program. By contrast, the Obama-boosting "Lean Forward" network failed to show any live testimony from the May 8 Benghazi whistleblowers hearing. "They're a little bit selective," the Media Research Center founder wryly remarked.

At this point, the cable news networks are "not news networks anymore" as "they are censoring news" on Benghazi, even as they have compelling whistleblower testimony. "How can it not be news," Bozell wondered, that Hillary Clinton insisted she took full responsibility for the Benghazi fiasco and yet the review board she commissioned to investigate the State Department's handling of the fiasco failed to interview her? "How was that not a story yesterday?! This is such a coverup taking place," Bozell argued. [watch the full "Media Mash" segment below the page break]

Also discussed on last's night's "Media Mash" was efforts by MSNBC anchors in particular to spin the Benghazi hearings as "a political witch hunt" and a "Fox News story." 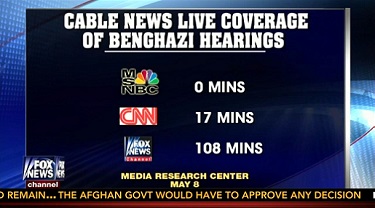 "Sean, talk about talking points.... It is so predictable that they would do this. There's no interest in truth from these news networks. They are doing spin [and] coverup," Bozell noted. Sure, "shame on those Democrats who are playing that game on Capitol Hill as well, but the news media are supposed to be the ones who are objective, reporting the truth."

Last, but not least, Hannity and Bozell examined clips of journalists attacking Sen. Ted Cruz (R-Texas) as a "jerk" for his persistent, vocal and dogged defense of conservatism and criticism of liberal policies in Washington.

"Are they threatened by Ted Cruz?" Hannity wondered, adding that there is also an obvious double standard at play by the media. "If it was Republicans going after a [liberal] Hispanic [senator], why do I think the charge of racism would be used when the criticism came up?"

"There's a rule of thumb here," Bozell answered, and that is, "The bigger the conservative political threat, the greater the liberal character assassination campaign."

Liberal journalists "see Cruz, rightfully, as being a threat to them," Bozell noted, "so they're coming after him."