First, to be fair to Keith Olbermann, I personally doubt the MSNBC anchor harbors prejudicial sentiments towards Mexican-Americans, but really, can you imagine the ire, or very least wide-open speculation if say Don Imus had said this?:

New York Senator Clinton, an adopted Giants fan watched the game in Minnesota and told the Associated Press, quote, "Super Bowl, Super Tuesday, we've got one down, let's get the other." This as her husband watched the game in New Mexico with the former governor, or with the governor and former presidential Bill Richardson, possibly asking Richardson for an endorsement and then, "would you please pass the guacamole?" 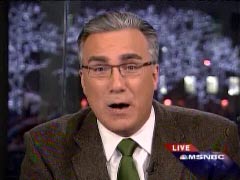 Richardson is Hispanic and grew up in Mexico City, where his father was a banker. Olbermann made a similarly stereotypical culinary reference back in September:

On Tuesday's "Countdown," Olbermann awarded O'Reilly both the "worser" and "worst" person in the world awards to his higher-rated competition at the Fox News Channel. O'Reilly, Olbermann thundered, is a 59-year old "passive-aggressive racist" for his recent remarks about his visit to a soul food restaurant.

With the Denver drive having stalled, Roscoe Parrish on the punt return. Roscoe's Chicken and Waffles at its finest. He could go the entire distance and does and it's seven-zip Bills.