Joy Behar: Speaking on Faith is 'Impinging on the Constitution' 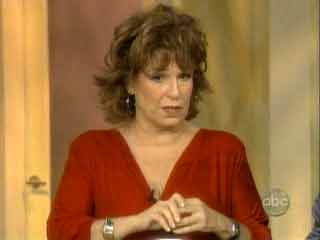 A presidential candidate who shares his or her religious beliefs is "impinging on the Constitution" according to "View" co-host Joy Behar. On the show’s season premiere September 2 the panel caught up on the many hot button political stories from Sarah Palin’s pregnant daughter to sharing religion in a public forum.

When Barbara Walters brought up the discussion of Senators Obama and McCain attending a forum with Reverend Rick Warren, Behar declared "both of them needed to say that Jesus Christ was their savior. That is very much impinging on the Constitution in my opinion. Why do we need to know who’s their savior?" Elisabeth Hasselbeck and Sherri Shepherd disagreed wondering what is wrong with them making such a statement.

Earlier in the discussion, upon the news of the pregnancy of Sarah Palin’s daughter, Whoopi Goldberg, a very opinionated abortion rights advocate, while not belittling Palin’s daughter’s decision to have the baby, opined "sometimes having the child is not the best thing for the kid."

To Whoopi’s credit, she also rebuked some in the media for following around the Palin family and looking too deeply into their private life.

Relevant portions of the transcript are below.

WHOOPI GOLDBERG: Now I’ve said always I didn’t think it was anybody’s business if their daughter gets pregnant. You know, this is my feeling because I’ve been there and I’ve been there on the other side of it when they chase you and they want to know everything. I don’t like it. Teenagers are going- and I’ve said this here too- teenagers, when they want to, they’re going to. And you can tell them just say no and you can give them all of the information in the world. You can show them condoms until they’re red in the face. Kids are kids, and here kids are children. They’re kids, so there you are.

GOLDBERG: It really does then take away from this girl being able to sit with her mom and being able to figure out what to do. Her mom says that she believes that right to life, and this girl, this is what she’s going to do. That’s it. But what I, what I really wish- and this is just me really going slightly off- is that everyone could have the choice to make that decision, that, that doesn’t go away. Because God bless Sarah- to have the child or not have the child, and I say this because Sarah Palin is one of those women who has the children and she’s got a strong family. But every kid that gets pregnant does not have that. And sometimes having the child is not the best thing for the kid. So I hope that this idea that this girl has made a choice and this one has made a choice stays with us. Because I know a lot of people want to get rid of choice. But I do think it’s important to get that.

HASSELBECK: I don’t think that choice is being taken away, but I think that a lot of people are looking down on that she’s going to have this child. She’s giving this, this child a chance at life.

BEHAR: No one’s looking down on her.

HASSELBECK: No, no, there are, there are left wing liberal blogs-

BEHAR: But not at this table, okay?

HASSELBECK: I didn’t say it was at this table.

BARBARA WALTERS: We had, among the many debates, was the debate this summer on the faith of, of McCain and Obama, both of whom have very strong faiths. And, and, technically, that should not be something that interests us in terms of government, in terms of, you know, how much or how little or whatever you believe in God. But, but we have been doing that now, more and more going into one’s personality. It may not be the best thing to do. But it’s very-

WALTERS: But we have been going more and more into personality. There was a time when you didn’t. You just discussed the subject. But more and more we are interested in the background, where they came from, what they’re life was like, what their values were like, which may or may not have anything to do with whether they would be a good president. So you can’t- it’s very difficult even though it may not be the best thing to say "we will discuss this, but we won’t discuss that."

BEHAR: To your point Barbara. On that roundtable on religion that they had-

BEHAR: What’s his name? Rick Warren. I mean, both of them needed to say that Jesus Christ was their savior. That is very much impinging on the Constitution in my opinion. Why do we need to know who’s their savior?

HASSELBECK: Why can’t they say-

SHEPHERD: Why can’t they just say it?