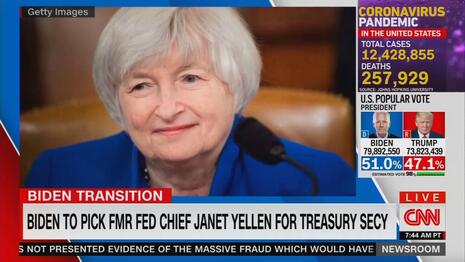 CNN Newsroom co-host Poppy Harlow was described Janet Yellen as critical on Tuesday, a woman who President-Elect Joe Biden was planning to nominate for Treasury Secretary. Rather than give information about her qualification, past positions, and how she would steer the ship during the post-COVID economic recovery, the partisan network gushes over her past fights for inequality and her historic appointment.

Harlow was quick to gush: “She'll be filling a critical position at a critical time particularly for women and for working mothers.”

No one was saying that these things are not important, but as a news organization, CNN should strive to provide the general public with more information about the future leaders of the government. Especially in light of how they treated Secretary Steve Mnuchin when he was nominated four years ago.

Rather than a gushing review over past statements and his past work history, the leftist media celebrated the pick of Steve Mnuchin by calling him a  “Wall Street Pirate.” Not once during the segment on Yellen did the hosts or their guest Cristina Alesci say anything critical about the nominee.

There was plenty of information that the American public deserved to know about Yellen both good and bad. Her past statements on income inequality and how that will relate to the policies she pursues, for example, would be of great interest.

This was only touched on when Alesci complained about the Republican response to her comments: “She was actually in front of Congress testifying in front of the Hill, and she took some heat from Republican lawmakers back then…for talking about inequality and sticking her nose where it didn't belong.”

Alesci was also quick to highlight her past experience in Democratic administrations:

She was Federal Reserve Chair under Obama from 2014 to 2018. She was also one of Clinton's — actually, Clinton's chief economic policy adviser back in 1997 through 1999.” While this does speak greatly to her qualification for the position, at no time during the segment did the network dig into what she did during her time in these positions.

Even positive things, like her Ph.D. in Economics, were ignored by the partisan media who were quick to gush over her response to their talking points and narrative.

The American people deserve a media who was going to give them an honest look at the upcoming nominees, their qualifications, policies, and plans while in office. The public will not be served by CNN continuing the biased praise of the nominees without any critique or substance involved.

This CNN bias was sponsored by Subway and Priceline. Click on the links to let them know what you think.

A transcript of the November 24th Coverage is included below:

HARLOW: — for 230 years. She'll be filling a critical position at a critical time particularly for women and for working mothers. The economic downturn that has accompanies this pandemic has been called a she-cession, in August and September alone, 80 percent of employees that stopped working were women. The situation, I should note, even more dire on the unemployment front for women of color.

JIM SCUITTO: CNN Politics and Business correspondent, Cristina Alesci joins us now. Cristina, Yellen, she will bring her experience as a former Fed chair up to 2018, and of course as a mother, to this position. How significant is that background?

CRISTINA ALESCI [CNN Politics and Business Correspondent]: It's really groundbreaking, Jim, if you think about it. Not only will she become the first woman Treasury Secretary but she will become the first woman to have held, if confirmed, of course, three very powerful economic policy making positions in the U.S. government. She was Federal Reserve Chair under Obama from 2014 to 2018. She was also one of Clinton's — actually, Clinton's chief economic policy adviser back in 1997 through 1999. And for women, they will have someone advocating for them at a time when they need it the most. And we know that she is passionate about helping women and equality because this is something she spoke about very publicly as Federal Reserve Chair back in 2015. She was actually in front of Congress testifying in front of the Hill, and she took some heat from Republican lawmakers back then, specifically Mick Mulvaney, who was one of Trump's former White House Chiefs of Staff and he was a Republican lawmaker back then and he criticized her for talking about inequality and sticking her nose where it didn't belong whereas, now it's different we have Powell who's a current Fed chair speaking about issues of inequality all the time he speaks.

HARLOW: I remember that moment so well and it’s so appropriate to bring up now in this moment. To deal with the inequality that has only been exacerbated by the pandemic, how can she get more done with Mitch McConnell on stimulus than even Treasury Secretary Mnuchin has been able to?

ALESCI: I think that's a great question, Poppy, but we've already seen just in the response to her nomination the two sides come together, Elizabeth Warren is tweeting, you know, glowingly about her, and then Pat Toomey just told one of our colleagues despite their — their differences at times that she — he thinks she's a strong pick.

ALESCI: So you're seeing, you know, both sides kind of say positive things about her. That doesn't mean it's going to be easy. Of course, Republicans and Democrats still remain very far apart on the top line number when it comes to a stimulus deal, so she's going to have to do real work there. But there are positive signs that she can bring the two together.

SCIUTTO: Yeah, even if those Georgia seats go to Republicans in the Senate, you only need a few Republican votes to come over for confirmation. Anyway, lots to come.