It seems as though MSNBC’s liberal agenda doesn't concern itself simply with secular politics. They want the Catholic Church to "lean forward" into fundamentally changing themselves to reflect liberal values. In service of this pulpit-pounding, MSNBC's Jansing & Co. program brought on two liberal Catholic women over two days. At no point did she turn to a traditionalist, orthodox Catholic to defend the church's traditional teachings.

On February 14, fill-in host Richard Lui interviewed Sister Louise Akers, of the Sisters of Charity to rail against the Church, in what she views as, “the last bastion of sexism.” Lui began the segment with the liberal nun by noting:

There’s certainly been criticisms in the past. For instance, Maureen Dowd in the New York Times criticizing the Vatican saying that they accused nuns of pushing radical feminist themes this is from a year ago. There's also the issue of women in the priesthood.  [See video after jump.  MP3 audio here.]

On February 15, Chris Jansing brought on Kate Childs Graham, a columnist at the liberal National Catholic Reporter, to continue MSNBC’s anti-Catholic agenda.  Neither segment offered guests to challenge the liberal ideology espoused by the guests; instead Jansing and Lui acted as cheerleaders to promote radical changes in church doctrine.

Jansing tossed softballs at Graham, enabling the liberal activist to claim that:

There's clearly a consensus in the pews about issues like transparency, accountability, women’s equality and LGBT equality, and we need a pope that's listening to that.

Why would you be a member of this church that seems to be anti-women, anti-gay? 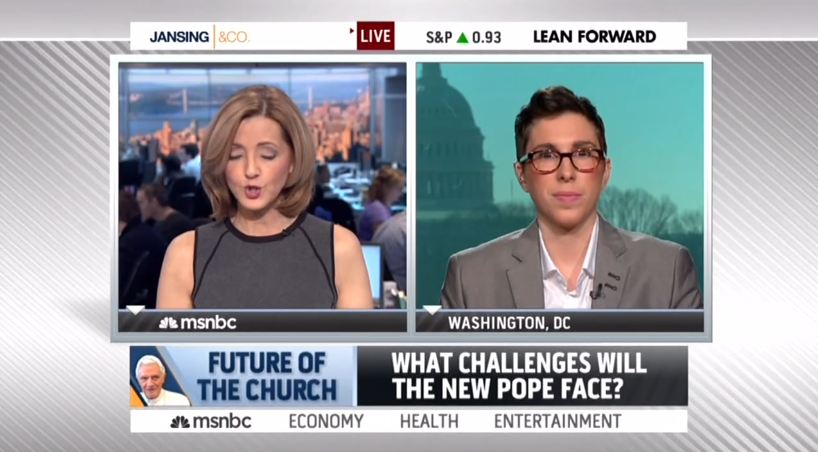 RICHARD LUI: The Vatican this morning is revealing Pope Benedict hit his head during last year's visit to Mexico, but officials deny it had any significant role in his resignation. Today the pontiff has been meeting with the pastors of Rome’s parishes a day after celebrating his final public mass at Ash Wednesday observances at St. Peter’s Basilica. The conclave of cardinals will meet next month to pick Benedict's successor. Let's bring in Sister Louise Akers the former director of the Office of Peace, Justice, and Integrity of Creation for the Sisters of Charities. Sister, good to see you.

LOUISE AKERS: Thank you. Good to be here.

LUI: Let me start with this. As the Cardinals get ready to pick the next Pope, what issues would you like the next Pontiff to address first? There’s certainly been criticisms in the past. For instance, Maureen Dowd in the "New York Times" criticizing the Vatican saying that they accused nuns of pushing radical feminist themes this is from a year ago. There's also the issue of women in the priesthood.

LUI: Do you believe, sister that the next Pope that is chosen from the Conclave might move that way? And what roles as you were just describing would you see as good roles for women to move in to?

AKRES: Who knows what the next Pope will do or who the next pope will be. My first thought with regard to future Pope was a hope and prayer really that we would have another person like John XXIII who brought us Vatican Council which reformed the church 50 years ago and it's ongoing today. I think, in light of the renewal and reform from Vatican 2, that's based upon the church being the church in the modern world that the role of women needs to be recognized as it's recognized really in most major institutions of the world. I think the Catholic Church; the Roman Catholic Church is probably one of the last bastions of sexism. And so in whatever ways that can be rectified, I think there's a growing resistance to the status quo today and a growing movement to suggest changes. Among those changes would surely be the option for women who feel so called to be ordained as priests. I think priesthood needs to be transformed and women could help do that. I think also women's role as I said before decision makers, policy makers would be another way to go.

LUI: At the top, at the middle, everywhere is what you're saying throughout the Catholic Church.

CHRIS JANSING: We're learning new details about what life will be like for Pope Benedict XVI after he steps down. The Pope has told a farewell audience of priests and clergy of the Diocese of Rome he will remain, quote, hidden to the world in retirement. Indicating he will not have a public role once his resignation takes effect February 28th. Joining me now, Kate Childs Graham, columnist for the Young Voices Series at the National Catholic Reporter and an activist in the progressive catholic movement. Good morning.

JANSING: After learning of the Pope's decision to resign, you actually sat down; you spoke with a group of young progressive Catholics. If there was a kind of overriding theme to their thoughts, what was it?

GRAHAM: I think what we’re looking for is a pope who's a good listener. There's clearly a consensus in the pews about issues like transparency, accountability, women’s equality and LGBT equality, and we need a Pope that's listening to that.

JANSING: When you say that transparency is a key issue to the next pope, what do you think that this Pope hasn't done or even Pope John Paul II that can change that perception?

GRAHAM: Sure. I mean think that this Pope certainly has had a papacy kind of plagued with scandal and division. He even spoke to that on Ash Wednesday, he said, he spoke about the divisions in our church. And I think that was a clear signal to the next Pope that their key task is going to be healing those divisions and that certainly is going to come with some transparency and certainly transformation in our church.

JANSING: Sister Louise Akres is a member of the Sisters of Charity. And she was on the program yesterday here on Jansing and Company. And here's what she had to say about women in the church.

LOUISE AKRES: I think the Catholic Church; the Roman Catholic Church is probably one of the last bastions of sexism. And so in whatever ways that can be rectified, I think there's a growing resistance to the status quo today and a growing movement to suggest changes.

JANSING: Sister Akres went on to say that women in the priesthood could be one possible solution and I'm wondering what your reaction is to those comments?

GRAHAM: Absolutely. I think women in the priesthood is one component of the transformation we need to see. But we can't just add women in stir, right? We need to fully transform our church, look at those policies and practices that we have that are great and keep them and lift them up and change those that just aren’t working and women's inequality in the church isn’t working for many Catholics.

JANSING: There has been a lot of talk about the church and modernization although to be fair the conversations that we are having right now are the same conversations that we had when Pope John Paul II was ill and then when the next conclave came to be. But are there other areas not just that you think the church should kind of quote/unquote modernize but areas in which you think there is real hope for progress.

GRAHAM: Sure. I don't know if it’s about modernization so much as it is about transformation. We need a bringing up to date to borrow a phrase from the Second Vatican Council, but we need more than that. We need to look at the teachings and practices around economic justice and social justice that have served Catholics so well and lift those up and we need to change those that aren't working, those around banning women from the priesthood is just one example but certainly those that condemn homosexuality is another

JANSING: It is interesting when you look just at the raw numbers of what's going on in the Catholic Church after years and years frankly of the number of vocations going down. They seem to be slowly on the rise, even here in the United States. There are some surprising numbers, I think, in the number of young people who are part of the Catholic Church or even joining the Catholic Church and I'm sure people asked you the question, Kate, why would you be a member of this church that seems to be anti-women, anti-gay? I'm sure you get this question. What do you say?

GRAHAM: I say that this church is as much my church as it is Pope Benedict's church. This church is home for me. And I think we see young Catholics and progressive Catholics, members of call to action, an organization that I'm on the board of, that are building inclusive justice-seeking, loving faith communities at the local level and we're going to continue to do that no matter who the next Pope is.