MSNBC Misinforms Its Viewers To Push For Minimum Wage Hike

Following President Obama’s call to raise the federal minimum wage to $9/hour in Tuesday's State of the Union address, MSNBC has been eagerly pushing the president’s new-found support for the hike.

Speaking on February 14, host Thomas Roberts conducted a one-sided interview with liberal contributor Goldie Taylor on the supposed need to jack up the minimum wage.  As most of Roberts’ segments are, not one guest was brought on to challenge Taylor’s liberal motives, with Roberts introducing the segment as such:

With the Republican Party pushing for a more compassionate message, opening the tent door so to speak. Wouldn't upping the minimum wage be a reasonable place to start?

I think it's frankly ironic when we have Republicans today and for many, many years talking about how we ought to be cutting down on what we do with welfare and how we help struggling families.

But aside from a biased presentation, another problem with the segment was an on-screen graphic during the segment which stated that, “Georgia has the lowest minimum wage at $5.15/hr.”  While technically correct, the graphic being presented to the liberal MSNBC viewers is extremely misleading, as lends the impression that Georgia workers actually earn that little. They don't, because, well, the higher federal wage preempts the state law.

According to the Department of Labor:

Since the federal minimum wage is $7.25/hr, any wages in Georgia are automatically paid at the federal rate, despite the state having an official minimum wage of $5.15.  Nowhere in the segment did Roberts or Taylor clarify the confusing graphic, and instead continued to press for a hike in the minimum wage.

For his part, Roberts did play clips of Reps. John Boehner (R-Ohio) and Marsha Blackburn (R-Tenn.) showing opposition for raising the minimum wage, but his segment allowed Ms. Taylor to speak unopposed in pushing for the newest MSNBC liberal agenda. 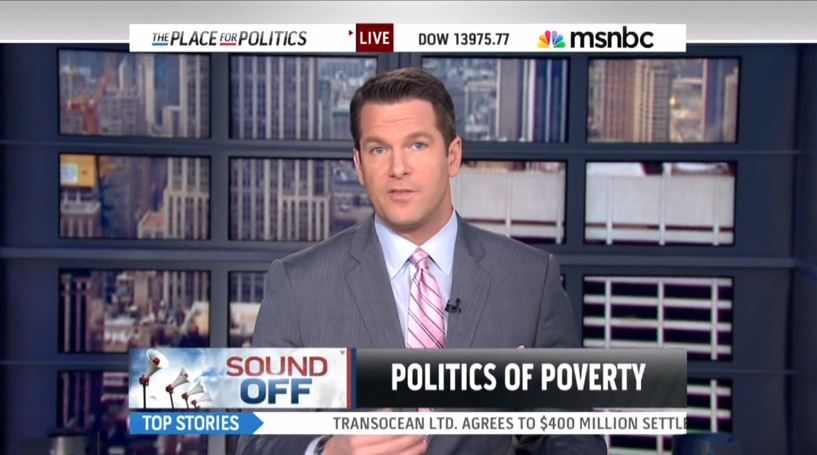 THOMAS ROBERTS: So for a second day in a row, President Obama is on the road taking his second term agenda to the people. And this time it's off to Decatur, Georgia where he's going to unveil a plan to expand universal preschool, a proposal that he rolled out on Tuesday night. And yesterday the president pushed for fairer wages for low-income Americans at a manufacturing plant in Asheville, North Carolina.

BARACK OBAMA: I believe we reward effort and determination with wages that allow working families to raise their kids and get ahead. And that's part of the reason why I said last night that it's time for an increase in the minimum wage because if you work full-time, you shouldn't be in poverty.

ROBERTS: But Republicans including Speaker John Boehner are not wasting time pushing back, saying a hike on the minimum wage has no chance of passing. Joining me now to sound off on the politics of poverty is Goldie Taylor, MSNBC contributor and managing editor of the Goldie Taylor Project. I will also point out she's a Georgia peach and the president is in your neck of the woods today. So Goldie, let me play for you though what Republican Congresswoman Marcia Blackburn had to say earlier on "The Daily Rundown" about the president's call for a $9 minimum wage. Take a listen.

MARSHA BLACKBURN: I'm not for raising the minimum wage, and this is why, you're going to exclude a lot of younger workers. I'm talking to moms out there, one of their primary concerns is that their children no longer have the opportunity to go in and get a job at a training wage or a minimum wage and then be mentored into learning how to be responsible, getting that paycheck, understanding the process.

ROBERTS: Is that confusing to people, Goldie, with the Republican Party pushing for a more compassionate message, opening the tent door so to speak. Wouldn't upping the minimum wage be a reasonable place to start?

GOLDIE TAYLOR: I think it's frankly ironic when we have Republicans today and for many, many years talking about how we ought to be cutting down on what we do with welfare and how we help struggling families. You know, what this should be about is meaningful work at meaningful wages. The ironic thing is, some years ago, I lived in Decatur, Georgia, where the president is today. I was on welfare at the time earning $7.50 an hour part-time at my very first newspaper job. We were on food stamps, we received AFDC at the time, I was receiving child care and day care grants, but it was because of those child care/day care grants that I was able to return to college and make a meaningful career for myself. 9 dollars an hour may have given me a little more gas money. 9 dollars an hour would've bought more diapers. 9 dollars an hour would've put another meal on the table. And so this is real stuff. And when we're talking about the theoretical things, You know, I think we ought to talk about how this impacts real people.

ROBERTS: Okay, and let's go ahead and play John Boehner. John Boehner was just speaking a moment ago, and I want to play it for everybody. Go ahead and listen.

JOHN BOEHNER: If he's serious about enacting his agenda, I think it must start with the part of this Congress that his party controls the United States Senate. You know, what can he get passed in the United States Senate. The president wants to impose a national cap and trade energy tax. I would hope that senate Democrats would take it up. If the president wants more stimulus spending, there will be no it doesn’t create jobs. I would expect the United States Senate to go ahead and take it up. If the president wants more tax hikes that destroy jobs, then his Democrat allies in the Senate ought to take it up. This isn't the agenda that many Americans are looking for. And I think many in the president's own party won't support those ideas. In the House, we're going to continue to focus on what the American people's top priorities are, creating jobs and cutting spending. Now, for the last two years, the house has done its work, we've passed legislation to tackle the tough challenges that America faces only to see our Senate colleagues do nothing. Well, those days are over. The House will continue to meet our obligations. But Senate Democrats must begin to do their work. And that's why we passed the No Budget No Aay Act of requiring the Senate to pass a budget for the first time in four years and that's why we're going to insist that they finally pass a plan to replace the president's sequester. This sequester was the president's idea. His party needs to follow through on their plans to replace it.

ROBERTS: We've been listening to John Boehner giving his briefing, live briefing. Goldie, sorry it had to interrupt us. But one thing that was really interesting there when we talk about the sequester that's coming up. And I want to get your reaction to this, the fact that the Republicans are kind of pushing this off on to President Obama and they disavow the fact that their Republican DNA is all over it because they as a majority voted for it.

TAYLOR: Absolutely, they did. They wanted this. But they did this because they expected Mitt Romney to win the election. He didn't. This president is now in office and they've got to really face down the consequences of signing on to that sequester. They've got to really come to the table, roll up their sleeves and do the really hard work of reforming taxes, they've got to do the really hard work of working on this debt ceiling, these other issues. They're trying to back away now and blame this on the president. I just don't think it's going to work.

ROBERTS: And basically with John Boehner saying that they are not on board with anything the president has to do agenda wise in a second term. A minimum wage hike is basically D.O.A.

TAYLOR: You know, that's probably right. I just don't think that a hike in the minimum wage will pass, you know, the House of Representatives today. But at the end of the day, the president was right. They deserve a vote. Working families around this country deserve a vote. And if you vote against the minimum wage, you ought to be able to go back home and defend it before your constituents.

ROBERTS: MSNBC contributor Goldie Taylor. Goldie, great to see you this morning, thanks for joining me.

TAYLOR: Thanks for having me.