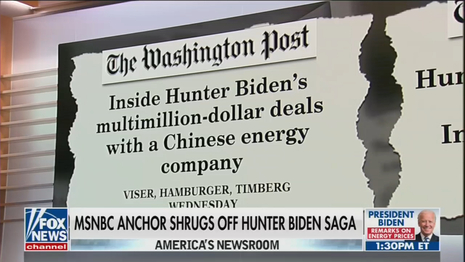 Last week in this space, the late arrival of the New York Times to the Hunter Biden “laptop-from-hell” was noted – along with the damage to the “paper-of-record’s” credibility.

Now the embarrassment has spread, as it should. Here’s the headline in the New York Post. It was, recall, the New York Post that published the original scoop on the laptop and the e-mails it contained way back there in October of 2020 -- a scoop that was silenced by Big Tech and ignored by the mainstream media when they weren’t dismissing it as “Russian disinformation.” The NY Post headline:

The story - which doubtless was a source of much justified laughter in the NY Post newsroom -- reports their latest story this way:

The Washington Post on Wednesday became the second major news outlet to reverse course and admit that emails from the infamous Hunter Biden laptop are authentic — nine months after it obtained them and a year and a half after the New York Post first reported on them.

Some verified emails involved a deal President Biden’s son pursued with the CEFC China Energy conglomerate for which he was paid nearly $5 million, according to the Washington Post.

Other verified emails related to his work for the Ukrainian energy company Burisma Holdings, for which Hunter Biden was paid as much as $83,333 or a month, or $1 million a year.

Then there was this over at a chortling Fox News:

The legacy media is finally shedding light on the growing scandal plaguing Hunter Biden, but the way the five liberal networks address (or don't address) his laptop they all dismissed during the 2020 presidential election is rather suspect.

CNN, MSNBC, ABC, CBS and NBC all reported this week how the years-long DOJ probe into Hunter Biden's finances is "heating up" as witnesses continue to give their testimony. President Biden's son is being investigated for potentially violating tax and foreign lobbying laws as well as alleged money laundering.

All of this attracted the attention of former New York Mayor Rudy Giuliani, the Trump lawyer who was given the laptop contents by the owner of the Delaware computer repair shop where Hunter had distractedly left it.

Giuliani to Newsmax: Press Should Be Prosecuted for Hiding Hunter's Laptop

NewsMax reported Giuliani as saying this:

Rudy Giuliani says he feels “vindicated” now that the mainstream media is admitting that the Hunter Biden laptop story is legitimate, but, he tells Newsmax, “I don't feel very good about it.”

What the press had done is ‘way too little, they're still lying completely,’ and it's "too late," he said Thursday on "Greg Kelly Reports."

“I mean, this determined a presidential election,” Giuliani said. “The people who did it should be prosecuted for conspiracy to defraud the American people. They did it on purpose, and they are leaving out the most important part of it because they're trying to make Hunter Biden the fall guy.”

Whether the media that sat on this story deliberately are prosecuted (doubtful in a supposedly still First Amendment country) or not, what is crystal clear is that the media is still continuing to sabotage its own credibility with their handling of the Hunter Biden story.

The recognition has dawned that, yes indeed, it seems increasingly possible that Hunter Biden is going to be indicted by federal prosecutors for his bizarre handling of his decidedly shady finances. And if and when that happens, the indictment of the First Son will be impossible for the media to ignore as they tried valiantly to ignore the original New York Post story of two years ago.

Not to mention they will not be able to ignore another story they have also been trying to ignore. Here’s the NewsMax headline:

While it would be foolish to jump the political gun, it is very safe to say the prospects for the GOP re-taking control of the House in 2022 -- and by a big margin -- will make a major House investigation of Big Tech a serious reality. A reality the media will be unable to ignore, particularly since such an investigation will indeed raise the dicy subject of any collaboration between Big Media and Big Tech in suppressing the Hunter Biden story to help elect Papa Joe -- aka, per the one infamous Hunter e-mail -- “the Big Guy.”

In short? With the reluctant - not to mention seriously late - concession of the Times and the Washington Post to the reality of the Hunter Biden e-mails, the credibility of both plus the others in TV-land will continue to plummet.

The amazing thing is that there is little to no effort by all of the above to stanch the bleeding of that credibility.

Which is another way of recognizing that the bleed-out of that journalistic credibility will continue.