How does Watergate differ from Obamagate?

Journalists led the charge to uncover the first. But now? Now journalists are leading the coverup of the second.

Over there at Real Clear Investigations, J. Peder Zane has illustrated the media coverup exactly. A sample from Zane:

“This week’s news that at least 39 Obama officials had unmasked Lt. Gen. Michael Flynn’s private conversations during the last month of their administration seemed a little shocking. Today, major media outlets are telling readers and viewers that the practice is “routine.”

Obama’s Director of National Intelligence James Clapper, now a CNN contributor, told his viewers that it is “routine” to unmask Americans who are communicating with foreigners under surveillance.

New York Times reporter Charlie Savage tweeted the practice is so "routine" that under President Trump, the National Security Agency handled 10,000 unmasking requests last year and 17,000 requests in 2018 – an average of 37 per day over the two years.” 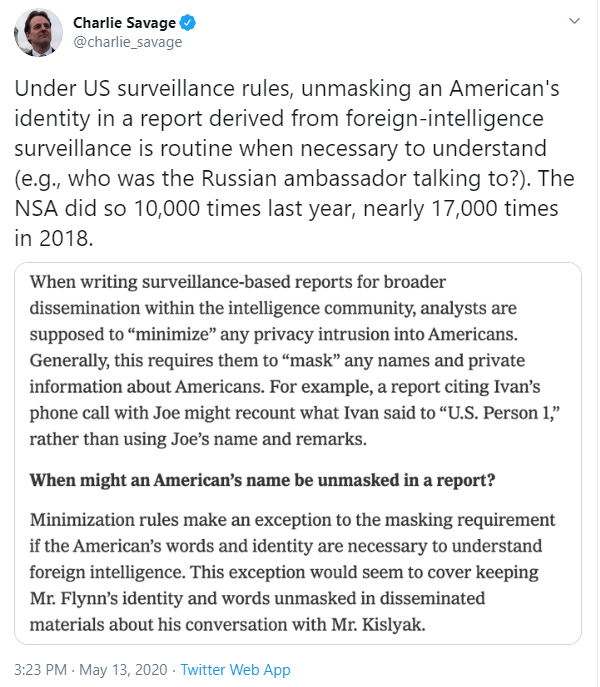 Over at MSNBC it was host Nicole Wallace leading the coverup for corruption by dirty cops and bureaucrats - and celebrated for doing so by Mediaite’s Reed Richardson. The Mediaite headline: "'Political Version of the Tooth Fairy’: MSNBC’s Nicolle Wallace Rakes Trump Over the Coals for ‘Obamagate’ Conspiracy."

Richardson opened with praise for the MSNBC host’s role in the Obamagate media coverup this way:

“MSNBC’s Nicolle Wallace fully skewered President Donald Trump’s attempts to get his base to believe in a ‘Obamagate’ conspiracy against him, laughing off the desperate effort as no more than the ‘political version of the Tooth Fairy.’”

Back at The New York Times, the Trump-hating Michelle Goldberg headlined: “Obamagate Is a Fake Scandal. Rick Bright Described a Real One.”

“The darkest winter in modern history” may soon be upon us, while Trumpists are obsessed with a new conspiracy theory.

“Recently people on the right have started pushing a ludicrous pseudo-scandal they’re calling Obamagate. It holds that investigations by Barack Obama’s administration into Russia’s attack on the 2016 U.S. presidential election were a form of illicit sabotage of Donald Trump and his team.

Nice try, Michelle. This is like blaming The Washington Post for investigating Watergate because Richard Nixon had humiliated the paper’s favorite 1972 presidential candidate George McGovern in a 49 state election landslide.

Ahhhh….no. Watergate really, in fact, involved genuine corruption with a president…ahem….abusing the FBI and CIA to investigate his political enemies. And The Washington Post, famously led by executive editor Ben Bradlee and investigative reporters Bob Woodward and Carl Bernstein, spent endless hours uncovering exactly what happened and publishing the facts.

Over at Slate, this was the cover-up headline: “'Obamagate' Wasn’t Even a Scandal the First Time. Here we go again: There was nothing nefarious about the “unmasking” of Michael Flynn.”

This jewel by Fred Kaplan begins this way:

“President Donald Trump’s clamor over an alleged scandal he calls “Obamagate”—a conspiracy theory buoyed up by Republican senators, the Wall Street Journal editorial page, and even the acting director of national intelligence—is, in fact, a big pile of hooey, and anyone familiar with national security secrets knows it.”

What all of these Obamagate deniers are about is a determined effort to journalistically cover-up what arguably is the biggest scandal in American history – a silent coup attempt against a President of the United States by a collection of dirty cops and dirty bureaucrats.

As former federal prosecutor Andrew McCarthy noted here at National Review, in an excerpt from his bestseller Ball of Collusion: The Plot to Rig an Election and Destroy a Presidency:

That leak, which clearly came from that “senior U.S. government official” who had access to the unmasking of General Flynn – was a federal crime. That is a fact.

So too are all those texts between the FBI’s Peter Strzok and Lisa Page about stopping the Trump presidency facts. So too is it fact that ex-FBI Director James Comey is captured on-video tape bragging that he sent FBI agents to the White House – deliberately taking advantage of the usual chaos surrounding a new presidential team’s arrival to investigate General Flynn. So too is it a fact the FBI did not tell Flynn he was being investigated and never told him he should have a lawyer present. And yes, so too is it a fact that recently released FBI notes reveal the Bureau was asking itself if the “goal”  was “to get him to lie, so we can prosecute him or get him fired.”

And on…and on and on.

There is one other hard core fact. That would be that unlike Watergate, mainstream media journalists are now involved in a determined effort to cover-up the massive political scandal that is Obamagate.