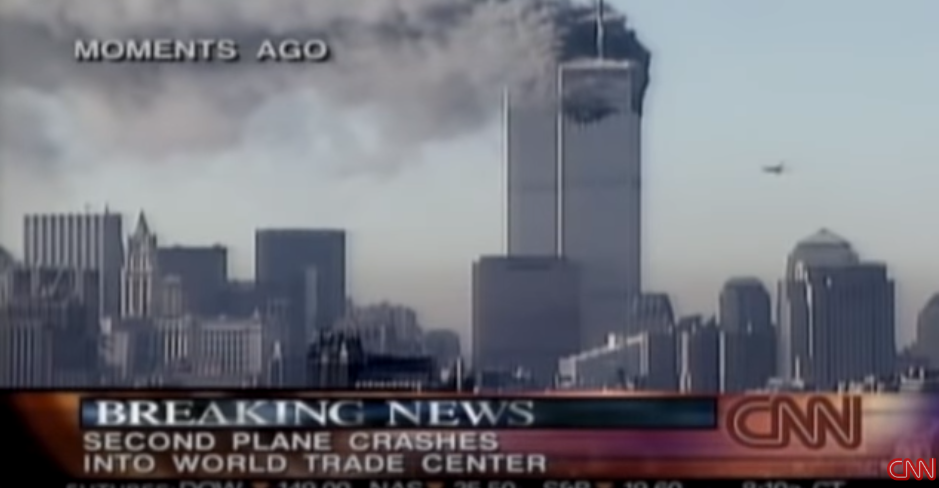 By now many readers have heard the tale.

The New York Times, on the 18th anniversary of 9/11, tweeted out the following, bold print for emphasis supplied:

“18 years have passed since airplanes took aim and brought down the World Trade Center. Today families will once again gather and grieve at the site where more than 2000 people died.”

Which is to say, the airplanes mysteriously came to life in some strange fashion and decided to fly into the Twin Towers.

Now contrast that tweet —  since deleted after a massive shaming —  with this first sentence from the New York Times on October 5, 1938. The subject was what was known in the day as the “Sino-Japanese war” — the invasion of China by Japan in the opening stages of what would become World War II. The fighting between Chinese and Japanese forces was already intense, and the story in question was about a Japanese attack on the Chinese war-time capital of Chunking (or Chongqing as it was also called.) Here’s the sentence, bold print for emphasis supplied:

“For the second time in the Sino-Japanese war Japanese planes yesterday morning bombed Chungking, loosing explosives from above the blanket of mist that hangs over the new capital almost all year into vacant lots in the western residential section,  along the Yangtze and Kialing River fronts and on the air field twenty miles east.”

In other words, The New York Times of 1938 had no hesitation in saying exactly whose planes were bombing Chunking. They were specifically and accurately described as “Japanese planes.” The idea of writing this sentence minus the descriptive identifier of “Japanese” doubtless would never have occurred to the Times reporter, whose byline was “F. Tillman Durden.”

Three years later, on December 8, 1941, the Times headlined this on the front page:

“Washington, Monday, Dec. 8.--Sudden and unexpected attacks on Pearl Harbor, Honolulu, and other United States possessions in the Pacific early yesterday by the Japanese air force and navy plunged the United States and Japan into active war.”

The thought of taking the "Japanese" descriptor out of that sentence would never have occurred to The Times editors of the day.

Also of note? On the front page of that Times issue of December 8th is this other headline: “Tokyo Bombers Strike Hard At Our Main Bases on Oahu.”

Notice? It doesn’t say “U.S. Main Bases” or “American Main Bases”, either of which would have been perfectly accurate.  Nope. The New York Times of December 8, 1941, in a headline that would never pass muster in the Times of today, refers to “Our Main Bases.” Which is to say, it simply never occurred to The Times editors of the day not to put the paper’s patriotism right out there for the world to see.

It’s a safe bet that reporters Durden and Kluckhorn, not to mention their Times editors, would have been astonished at the latest Times tweet that made it appear as if somehow, someway, the 9/11 airplanes had a life of their own and mysteriously decided to attack the Twin Towers.

Contrast the 9/11 tweet and accompanying story with this Times story of the riot in 2017 Charlottesville. The paper headlined that the participants were members of a “White Nationalist” movement. After learning the facts behind the identity of the driver of the car that was used to kill a protestor named Heather Heyer, the Times had no hesitation in identifying the driver. He was a “Neo-nazi”

But 9/11? In this gem of an article,  reporter James Barron said this, bold print for emphasis supplied:

“It has been 18 years since terrorists commandeered airplanes and the twin towers of the World Trade Center were brought down.”

What kind of terrorists? The Times doesn’t say. There is a reference to “the Taliban” and “Al Qaeda”, but not a hint as to their origin or driving cause.

Identifying the perpetrators as “Islamic terrorists”, "Islamic extremists” or “Islamic radicals” or “Islamicists”? No can do for the Times.

“This is what Orwell called memory-holing, a deliberate act that involves the Powerful rewriting the past by erasing the past, all in the hope of controlling the future.”

In his new issue of The Limbaugh Letter, Rush Limbaugh says this of the Times now that the Mueller report and the Trump-Russia collusion hoax has gone bust. Says Rush:

“Enter the fresh new leftist hoax, ‘The 1619 Project,’ via the New York Times: everything great about America is disqualified because it was built on slavery.

…Talk about hubris. The Times thinks it can ‘reframe’ - lie about - our history, inventing new start dates and defining ‘who we are.’ It’s bogus! We were born in 1776 out of a historic revolution costing blood and treasure, the price of liberty. The Times believes it can make up what’s basically a Democrat Grand Unified Theory to explain everything that’s supposedly wrong with this country: ‘From the lack of health care to mass incarceration, from the brutality of capitalism to the epidemic of sugar - no part of America has been untouched by slavery.’ Give me a break.”

Give me a break indeed.

The New York Times, once “the paper of record” whose reporters and editors accurately recorded the history of the day has now become the memory-hole paper. 9/11? That was done by “airplanes”  or “terrorists” - not Islamic terrorists. The founding of the United States? It wasn’t 1776, it was 1619 - and it was all about slavery, not freedom and liberty.

Unless, of course, you’re The New York Times.