Marianne Williamson and the ‘Dark Psychic Forces’ of the Media 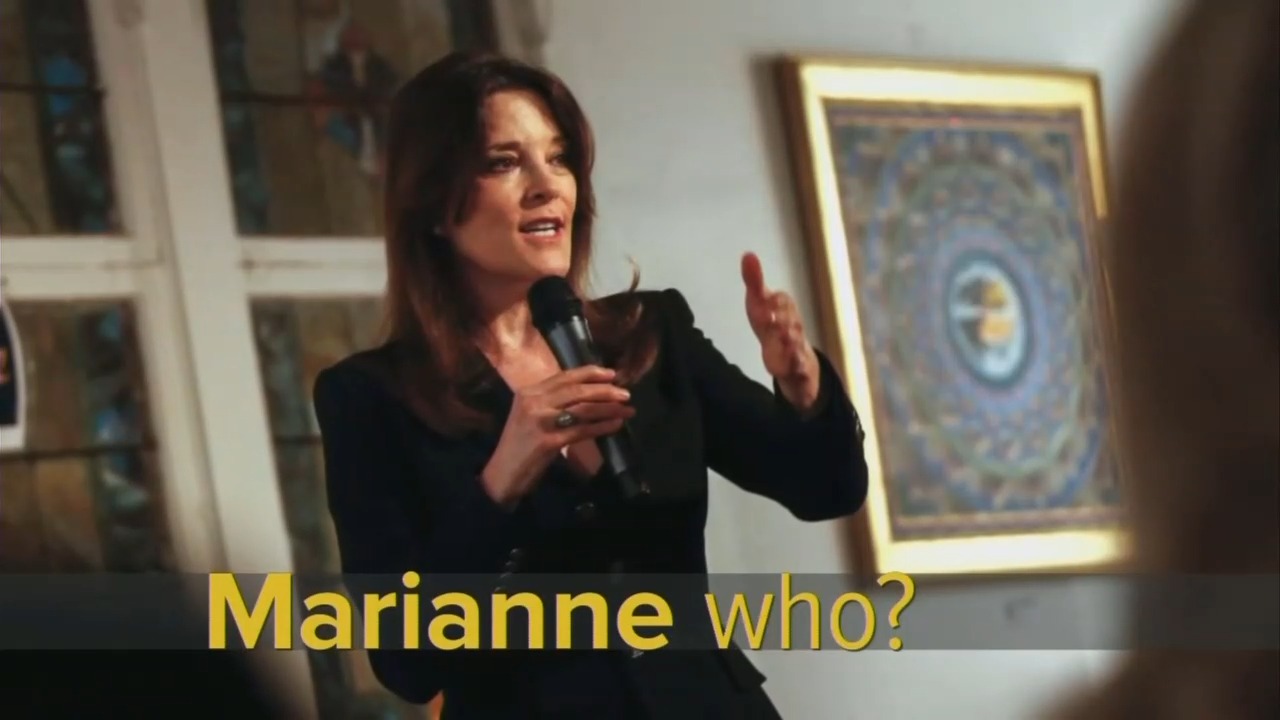 Democratic presidential candidate and self-proclaimed “spiritual leader” Marianne Williamson made headlines in the first of the recent Democratic debates in Detroit by saying this of the water crisis that has plagued nearby Flint, Michigan. Said she, as reported here by USA Today:

WASHINGTON – Candidates at the second Democratic debate in Detroit were asked about the water crisis in Flint, Mich. and what they would do to solve it. Author and activist Marianne Williamson, who has made racial reconciliation a cornerstone of her campaign, said the problem was ‘deeper than Flint.’

Flint's water crisis began in 2014 after a change in water supply and treatment resulted in the lead contamination of the city's water. Flint is a majority African-American city.

‘Flint is just the tip of the iceberg,’ Williamson said, turning to the broader issue of racial inequalities in American society. She said the problem in Flint would not have happened in Grosse Pointe, an affluent, majority-white suburb of Detroit where Williamson raised her daughter.

‘If you think any of this wonkiness is going to deal with this dark psychic force of the collectivized hatred that this president is bringing up in this country, then I'm afraid that the Democrats are going to see some very dark days,’she continued.

Williamson argued the Democrats needed to start talking about deeper issues of race. ‘If the Democrats don't start saying it, why would those people vote for us,’ she said, referring to African American voters.”

The media —  all too predictably —  swooned. Here’s but one example from the Daily Beast, which headlined:

Marianne Williamson Takes on Racism—and Warns of ‘Dark Psychic Force’
She wasn’t given much time to talk, but when she did she made it count.

What Williamson did was pick up the media’s favorite trope of the moment - “Trump is a RACIST!!!!!!” —  and then blithely make an utterly false connection between Trump and Flint while simultaneously studiously ignoring the hard facts of racism in America and exactly who has profited from it —  and continues to profit from it.

For the first, note that Flint’s troubles can easily be pinpointed. Way back there in the mists of long-ago pre-Trumpian time, Flint woke up in 2002 to the fact that it was $30 million in the hole. Surely not by coincidence. Beginning in 1975 —  a full 27 years earlier —  Flint had been run by one Democrat mayor after another. The Republican Governor of Michigan, John Engler, declared a financial emergency and appointed an emergency financial manager to try and straighten out the mess. The problem was resolved by 2004. And “normal” resumed.

In 2011 there was another financial emergency. And the start of the water crisis? That is considered to be April 25, 2014 when a water switch from a Detroit contract that used water from Lake Huron is made, this time using water from the Flint River. The switch was made to save $5 million dollars — a need prompted by the financial crisis. By August of 2014 the city was already announcing a boil water advisory. Note: In 2014 Donald Trump was a private citizen, a developer and reality TV star. He had nothing - zero - to do with the decisions made by Flint officials.

But hey. Why let facts stand in the way when you’re a Democrat running for president?

The real “dark psychic force” here is the long and horrendous history of the Democrats and race. Whether it was the party of slavery and those six platforms supporting what was genteelly called the “peculiar institution” or those 20 platforms staunchly supporting segregation or today’s worship of identity politics, the elephant in the Democrats’ living room is the repeated use of race to win elections.

Now comes Marianne Williamson ever so spiritually ignoring all of this real history and its effect on the culture and politics of her party. In a normal world, an aggressive media would have zeroed in on this latest play of the race card.

But no. Instead, the media was busy playing the race card itself. There was my old CNN colleague Don Lemon unsurprisingly attacking the President as a racist.In fact, right here at NewsBusters — before the debate — there was note taken of what could be expected from Don as a serious man of the extreme Left.

I myself have had this conversation on race with Don. It didn’t go well. I was standing up for a colorblind America, as was the legendary call of Dr. Martin Luther King. Don insisted that I was “crazy” if I didn’t judge people by race. I do believe I said that he sounded like the old segregationist and Birmingham, Alabama police commissioner Bull Connor. As I recall Don cut me off the air with a short:“We’re done.” End of segment.

Which is in its own way a small yet perfect illustration of how the Left needs and depends on race to win elections - and how the media is aiding and abetting them.

The ‘dark psychic force” that really is out there is the way the media has adopted the Left’s innate need to judge anyone and everyone by race. And manipulate their coverage accordingly. Playing the race card can now get you tons of favorable coverage  from a media that is itself all too willing to play the race card.

And you can be sure of one thing. No one of any prominence in the Leftist State Media will confront any of this race card playing by Williamson and other Democrats, much less will they stop playing it themselves.

Because, of course, they would quickly be called racist.

Ya can’t make it up. Dark psychic forces are indeed at work.