Does CNN Really Expect Us to Take Don Lemon Seriously as a Debate Moderator? 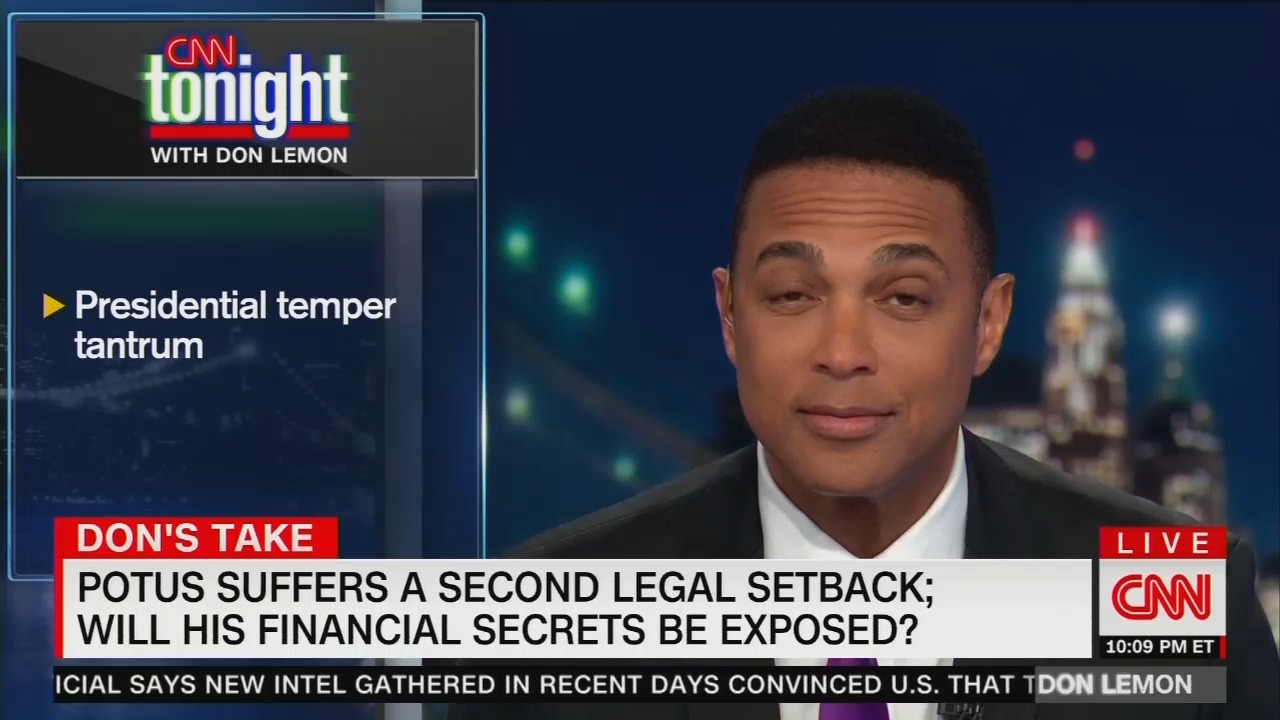 CNN has dozens of anchors and political journalists, yet the network chose the Democrat-adoring, Trump-despising, black hole conspiracy theorist Don Lemon to join the more reasonable Jake Tapper and Dana Bash as moderators of this week’s two-night Democratic presidential debates.

Where to begin? A look at the record shows the host of CNN Tonight loves the liberal Speaker of the House (“Thank God for Nancy Pelosi”) while he thinks Barack and Michelle Obama are “the closest thing we have to royalty” in America. Meanwhile, he’s lashed out at President Trump, calling him a “racist” with “no sanity,” maybe guilty of “treason.” And, last month, “Hitler.”

White men, according to Lemon, are “the biggest terror threat in this country.” But he’s actually attempted to rationalize the violence of the radical left Antifa movement: “No organization is perfect.” 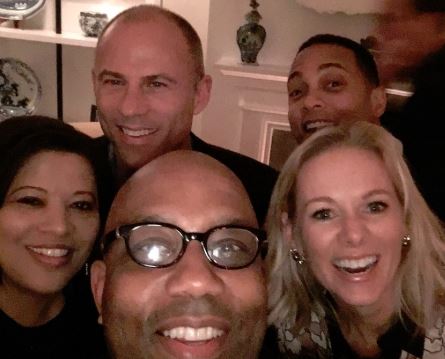 Last year, Lemon gleefully joined in the all-day “shithole” extravaganza when CNN personalities demonstrated how appalled they were that President Trump would utter that word – by repeating it 195 times on the air. Lemon and his CNN colleagues drew over 160 FCC complaints for that performance.

Lemon hates rank-and-file Trump supporters, describing them as people who would “steal and cheat, lie to their own mother.” Yet in November, Lemon laughably boasted that he had no bias: “I’ve been an independent for a long time....Don’t tell me who to vote for.”

The following is a very brief look (via the MRC’s archives) at Lemon’s most incendiary and obnoxious outbursts during his tenure at CNN:

Trump Supporters Would “Lie to Their Own Mother”

“We’re up against people who will lie, steal, and cheat, lie to their own mother, lie to themselves about what’s right for this country, about truth and about facts. If they will ignore any misgiving, any terrible deed, any awful saying they will just ignore it for their own political purpose. They will ignore the bigotry and the pettiness and the childishness about what Donald Trump said about me and LeBron James and others just because they want to gain some sort of political clout or they want a few more dollars in tax money. At what cost?”
— CNN host Don Lemon on CNN’s Cuomo Prime Time, August 6, 2018.

“Network presidents and executives have to wonder should they carry it live....Because you’re giving the President...the opportunity to speak to the United States unfettered – to speak to the people of the United States....[There should be] a delay of some sort.”
— Host Don Lemon previewing the President’s address about border security as aired on CNN Tonight, January 7, 2019.

“Sometimes you can’t fight people by – you know – praising them or being nice to them. You have to fight fire with fire sometimes. Listen I’m not advocating violence.”
— Host Don Lemon on CNN Tonight, August 13, 2018.

“Article III in Section Three of the Constitution says this, ‘treason against the United States shall consist only in levying war against them or in adhering to their enemies, giving them aid and comfort.’ So, no president has ever been charged with treason, Douglas. Do you believe the President’s actions fall anywhere within that definition?”
— Host Don Lemon’s question to presidential historian Douglas Brinkley talking about the Vladimir Putin summit as aired on CNN Tonight, July 17, 2018.

“This is who we elected President of the United States....There was no gravitas. There was no sanity....If you watch that speech as an American, you had to be thinking what in the world is going on? This is the person we elected as President of the United States?”
— Host Don Lemon reacting to Trump speech in Arizona, on CNN Tonight, August 22, 2017.

“But think about the despicable people we’ve had in history. OK? Now I’m going to use an extreme example. Think about Hitler. Think about any of those people. Would you say that that person is allowed – or let’s put it this way? If you could look back on in history would you say well, I’m so glad that that person was allowed a platform so that they could spread their hate and propaganda and lies? Or would you say it probably wasn’t the right thing to do to spread that because you knew in the moment that that was a bad person. And they were doing bad things. Not only were they hurting people. They were killing people.”
— Host Don Lemon on CNN Tonight, June 18, 2019.

Lemon to “Racist” Trump: I Know Your Watching

“My feeling is about this President have been known. I’ve said it on the air. You know, I think he has – he is racist. I think his actions show it. I think the facts show it. Does he attack me for that reason? I don’t know. That could be a part of the equation. But I think he does it because he watches every night. He will say he doesn’t. He likes hearing about himself from a number of different people in real time and that’s what my show is....I know he’s watching. I know.”
— Don Lemon to co-host Mark McKinnon on Showtime’s The Circus, May 20, 2018.

GOP “Enablers” Are “Complicit” in Racism

“Anyone who is American and believes in this country should be speaking out against this person and saying that it is wrong for him to do this.  And anyone who —  let me be plainly clear — anyone who is in that White House and who is supporting him is complicit in their racism as well.”
— Host Don Lemon on CNN New Day, August 16, 2017.

“This President traffics in racism and is fueled by bullying. From keeping children at the border in cages to bullying journalists at everyone in his rallies and every chance he gets. President Trump is trying a divide and conquer strategy here and here’s how it goes. He divides by race and tries to conquer decency by smearing and besmirching the truth and the people who fight to uphold it....I wonder if he will succeed.....He is the one who has his finger on the pulse of this country. Is he revealing who we really are?”
— Host Don Lemon responding to Trump’s tweet calling him the “dumbest man on television” as aired on CNN Tonight, August 6, 2018.

“The biggest terror threat in this country is white men, most of them radicalized to the right, and we have to start doing something about them. There is no travel ban on them. There is no ban on – you know, they had the Muslim ban. There is no white guy ban. So what do we do about that?”
— Host Don Lemon on CNN’s Cuomo Prime Time, October 29, 2018.

Lemon Gets Chummy with Cory

Host Don Lemon to Cory Booker: “You’ve been on my mind all week because I’ve been reading your book.”
Cory Booker: “You texted me about that!”...
Lemon: “You would be the first unmarried president in over 130 years. What are the odds that we would see a wedding in the White House?”...
Booker: “Is this CNN or TMZ?”...
Lemon to Booker after cutting to commercial: “Nice job, nice job.”
— Moderating Cory Booker: A CNN Presidential Townhall, March 27, 2019.

“I was like, ‘oh, my gosh, Nancy Pelosi is a boss!’ I mean she handled herself amazingly....I’m sure Democrats are going all across the country tonight, ‘thank God for Nancy Pelosi!’”
— Host Don Lemon in discussion about Donald Trump-Chuck Schumer-Nancy Pelosi meeting as aired on CNN Tonight, December 11, 2018.

Mourning the Mistreatment of America’s “Royalty”

“They are America’s First Couple, the closest thing that we have to royalty, President Barack Obama and First Lady Michelle Obama. But speaking to People magazine, according to the Obamas, they’re sometimes treated less than like royals, or the First Couple, and more like the help.”
— Anchor Don Lemon on CNN Tonight, December 18, 2014 talking about People magazine’s interview with the First Couple, “The Obamas: How We Deal with Our Own Racist Experiences.”

Can’t Confuse Him With a “Fair and Balanced” Journalist

“That’s not my slogan, to be ‘fair and balanced.’ My thing is about accuracy and the truth. Just because someone has another point of view or opinion, I don’t believe in false fairness. I just believe in the truth.”
— CNN anchor Don Lemon in a January 25, 2013 interview with the Dallas Voice.

“Whether it was hijacking or terrorism or mechanical failure or pilot error, but what if it was something fully that we don’t really understand? A lot of people have been asking about that, about black holes and on and on and on and all of these conspiracy theories. Let’s look at this....I know it’s preposterous, but is it preposterous?”
— Anchor Don Lemon wrapping up a 10pm ET CNN special report on the Malaysia Airlines Flight 370 disappearance on March 19, 2014 as the on-screen headline blared: “The Theory of Black Holes.”