The voice was instantly recognizable, even though its owner identified himself.

‘'The record shows he has a strange idea of what justice is” intoned American icon and movie star Gregory Peck. The “he” in question was Judge Robert Bork, and Peck was lending his voice to something new in American history: a television commercial attacking a nominee for the United States Supreme Court.

The ad, which can be seen below, was sponsored by the far-left People for the American Way, the group founded by the far left Norman Lear. It was no accident that Lear’s day job was as a television producer.

With appropriate music that was simultaneously patriotic sounding yet ominous, it showed a family walking up the steps of the Supreme Court, staring up in reverential wonder. “Please,” said Peck, “urge your Senators to vote against the Bork nomination. Because if Robert Bork wins a seat on the Supreme Court, it will be for life: his life — and yours.”

As a young Reagan White House staffer in the day, I can say that the White House was caught unprepared. Something like this had not been done before. Indeed, the very conservative Antonin Scalia had not long before been confirmed by a vote of 98-0. Bork was nothing if not superbly qualified. 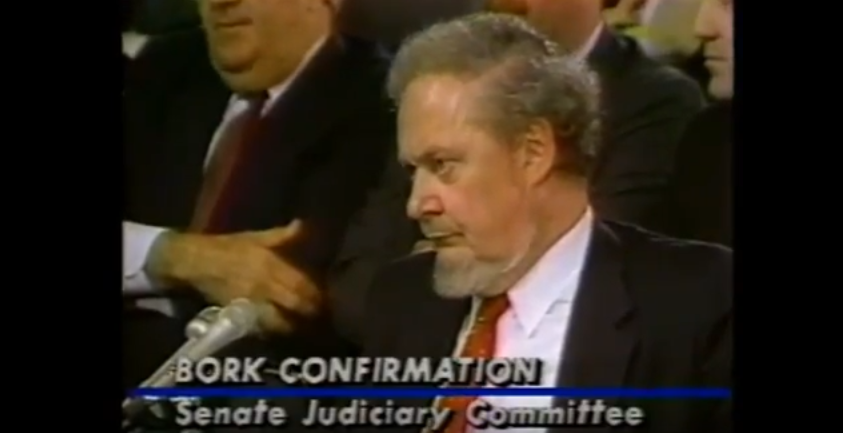 He was a judge on the DC Circuit Court of Appeals and had been a Yale Law professor and a partner in a prestigious law firm. He was an intellectual’s intellectual, a serious and deeply well-respected legal and constitutional authority. And out of the proverbial blue, he was being assaulted on television as if he were a legal Jack the Ripper.

All of this was coordinated. Famously —  or infamously —  Senator Ted Kennedy took to the Senate floor and made a startling assault in a speech about “Robert Bork’s America.” In which women would be relegated to back ally abortion mills, black Americans would be back eating at segregated lunch counters and worse.

(There was no word, mysteriously, that it was Democrats who had segregated those lunch counters and more in the first place. But I digress.) And there was more. Somewhere in the bowels of the Reagan Library is a memo from my younger self in which I suggested getting actor Charlton Heston, a conservative and Reagan friend, to do a TV ad in response to the Peck ad. Heston too had an instantly recognizable voice. The idea went nowhere.  Bork, of course, was defeated.

From that moment on, Supreme Court battles were never to be the same again. The difference now is that conservatives are on to the game, having learned the hard way. The Judicial Crisis Network immediately stepped up to the plate, headlining: “Judicial Crisis Network Launches Confirm Brett Kavanaugh, a $1.4 Million AdBuy (National, AL, IN, ND, WV).”

The statement from JCN began in part this way:

“WASHINGTON – The Judicial Crisis Network is launching Confirm Brett Kavanaugh, a $1.4 million ad buy on national cable and digital in Alabama, Indiana, North Dakota and West Virginia. The ad is a bio spot about Judge Kavanuagh, President Trump’s nominee to the Supreme Court.

The group had spent $10 million on a campaign supporting Neil Gorsuch’s nomination for the Court, and it wasn’t going to slack off now. As seen above they first did a commercial the moment Justice Anthony Kennedy resigned, touting President Trump’s previous pick of Justice Gorsuch and pushing the need for another, as yet unnamed, conservative pick. When the President picked Judge Kavanaugh the group announced the aforementioned  $1.4 million ad campaign in support of the new nominee, featuring the pro-Kavanaugh commercial.

The question is obvious. Why the felt need for these commercials? And the answer is just as obvious. As the 1987 Reagan staff learned to its sorrow, a conservative Court nominee is going to be a serious target not just for liberal special interest groups but for their allies in the liberal media. In 1987 there was no Fox News. No Rush Limbaugh and no conservative talk radio as it exists today. Bork, in a television sense, was effectively all by himself out there with no support.

Now the playing field has been evened out. And a good thing. Already the anti-Kavanaugh borking campaign has begun. The Washington Post, in a piece appearing under the word “Investigations” headlined: “Supreme Court nominee Brett Kavanaugh piled up credit card debt by purchasing Nationals tickets, White House says.”

This jewel of a hit piece begins:

“Supreme Court nominee Brett M. Kavanaugh incurred tens of thousands of dollars of credit card debt buying baseball tickets over the past decade and at times reported liabilities that could have exceeded the value of his cash accounts and investment assets, according to a review of Kavanaugh’s financial disclosures and information provided by the White House.”

In other words? The man spends money on baseball, so he shouldn’t be confirmed.

The New York Times focused on just how the Democrats would attack, headlining: “Senate Democrats Come Out Swinging in Long-Shot Fight to Block Kavanaugh.”

WASHINGTON — Senate Democrats, facing an uphill struggle to defeat the nomination of Judge Brett M. Kavanaugh to the Supreme Court, opened a broad attack on Tuesday, painting him as an archconservative who would roll back abortion rights, undo health care protections, ease gun restrictions and protect President Trump against the threat of indictment.”

Fox News took note that liberals were going after Kavanaugh in another way- for his first name. The headline: “Liberals attack Brett Kavanaugh for 'frat boy' name.

This hilarious report said among other things:

The latest line of attack from liberals against Brett Kavanaugh, President Trump’s nominee for the Supreme Court, is knocking the judge for his “frat boy”-sounding first name.

“Now I don’t know much about Kavanaugh, but I’m skeptical because his name is Brett,” Colbert said during the monologue on his show Tuesday. “That sounds less like a Supreme Court justice and more like a waiter at a Ruby Tuesday’s. ‘Hey everybody, I’m Brett, I’ll be your Supreme Court justice tonight. Before you sit down, let me just clear away these rights for you.’

This is only the beginning. The nomination is barely a week old and the assault has begun. (As an aside that really isn’t an aside: The fact of all of this controversy is a signal of just how far out of control the game of making the Supreme Court into an un-elected legislature has gone. The Constitution never intended for the Court to be making law. Rather it is there to interpret the law. Finally, one hopes, some serious media attention will be spent on that aspect of this fight.)

At long last, conservatives are on their media game. What began on television with liberal Gregory Peck courtesy of the far left People for the American Way —  the latter not coincidentally founded by a television producer —  is now being answered on television. As the summer proceeds through Senate confirmation hearings and a targeted fall vote on Kavanaugh, unlike Robert Bork in 1987, the nominee will not be alone.

The late night liberal comedians will mock. The far-left groups will screech. Democrats in the Senate will bluster. But one can take it to the bank.

Try as the Left might - and will - Brett Kavanaugh will not be successfully borked. The conservative media will see to it.