When the left truly has nothing bad they can say about the latest action from the President, they resort to childish insults and cheap shots. It seems like the writers of CBS’s The Late Show had that problem Tuesday night when they wrote host Stephen Colbert’s monologue about Trump’s Supreme Court pick, Brett Kavanaugh, lamely bashing him for picking from a pool of “white guys” that want to take away people’s “rights.”

Characterizing the anticipation waiting for the announcement being like a reality show, Colbert joked that he made it a “drinking game” where he filled glass after glass. Flatly ignoring that one of Trump’s top contenders was a woman, Colbert snidely remarked that Trump only picked from a pool of “white guys.”

“Which means I have Trump nomination bingo! As you can see, all the squares say, "White guy,” he cracked.

The petty insults continued as he mocked Kavanaugh as a model for “Generic Dads Monthly” with a name that sounded like it belonged to a waiter.

"Hi, I'm Brett, I'll be your Supreme Court Justice tonight. Before you sit down, let me just clear away these rights away for you,” the host mocked.

Grasping at straws, he added that Kavanaugh attended the same school as Trump’s other Supreme Court pick, Neil Gorsuch, so that must mean he was voted, “Second most likely to repeal Roe v. Wade.”

Getting more serious, Colbert pointed out that Kavanaugh once wrote that presidents should be exempt from criminal prosecution and investigation while in office. Thinking he discovered the golden ticket, Colbert blasted Kavanaugh as a partisan hypocrite who thought the president should be “above the law because his job is hard:” 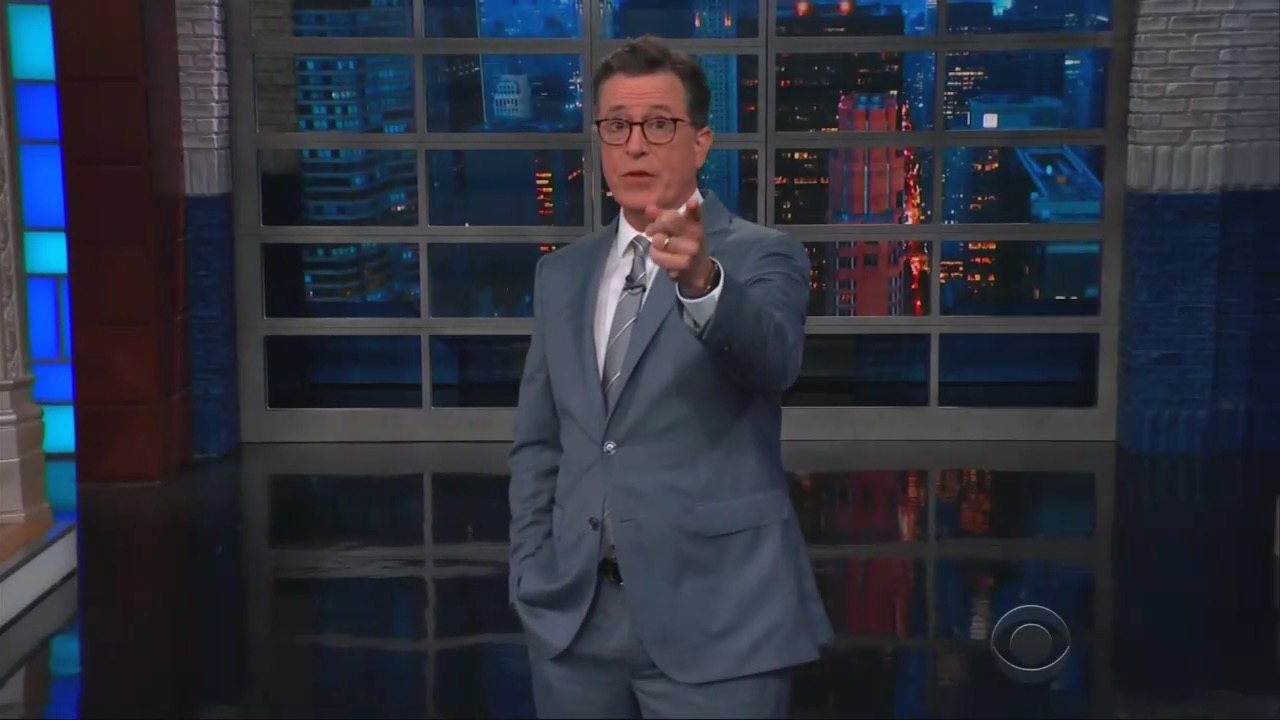 So Trump picked the guy who thinks presidents shouldn't be prosecuted! That's like Steph Curry picking the ref. and the ref has previously ruled, "Warriors number one!" Whoo! ( Laughter ) Now, "Leave the president alone" might seem to be an odd position from a guy like Kavanaugh who worked for Ken Starr's investigation of Clinton. But that was before Kavanaugh worked for George W. Bush. He explains, "My chief takeaway from working in the White House for five-and-a-half years... Is that the job of president is far more difficult than any other civilian position in government." So he thinks the president should be above the law because his job is hard? In that case, I say moms of three or more kids ought to be able to murder at will. ( Cheers and applause )

Going down the list of all the things the left likes to complain about, Colbert noted Kavanaugh was a “big supporter of the Second Amendment,” as if this was a bad thing:

He also noted how Kavanaugh has been involved in “some of the biggest partisan fights of the last 20 years,” including the Elian Gonzalez case and the Florida recount controversy in the 2000 election. Colbert closed out this pathetic attempt at a takedown of Trump’s pick by snidely remarking that Kavanaugh believes life “begins at conception:”

In fact, Kavanaugh's been so ubiquitous in the Republican legal establishment that he's been called, the "Forrest Gump" of Republican politics. ( Laughter ) Yeah. Which explains this recent interview he gave to Politico. "My momma always said, 'life was like a box of chocolates. It begins at conception!'" ( laughter ) ( Cheers and applause )