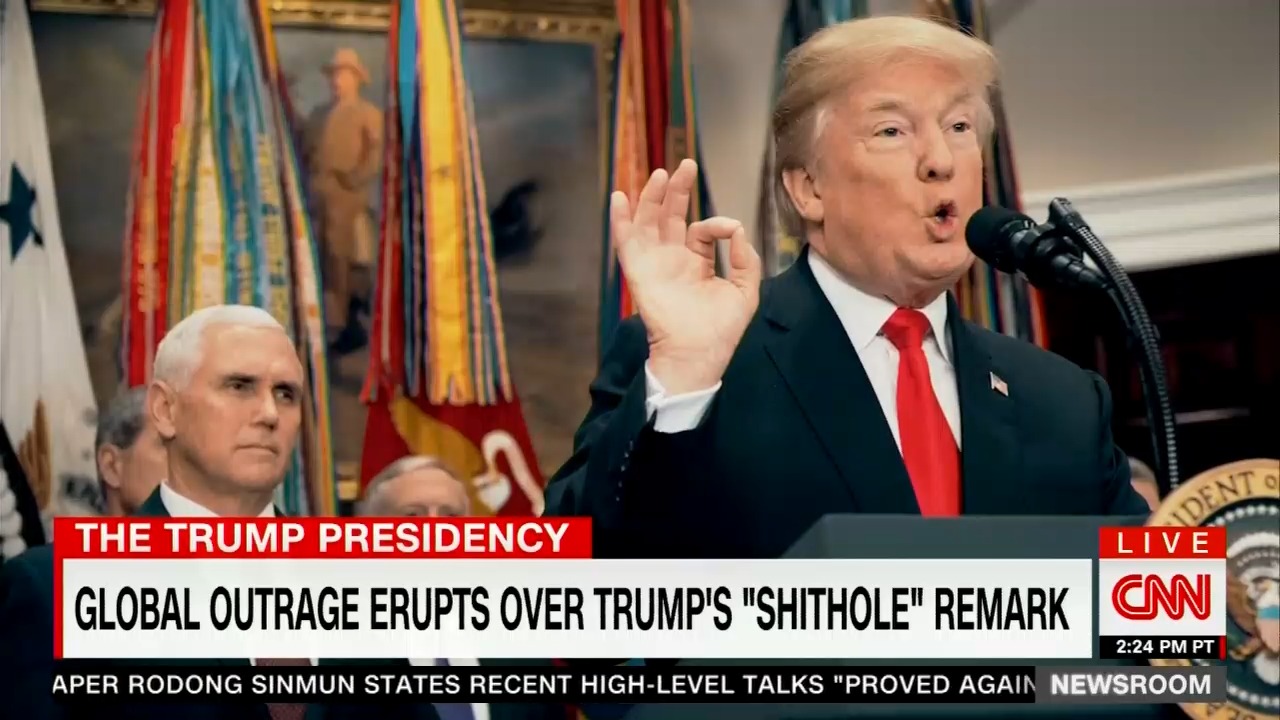 The basic fact is in dispute.

According to Illinois Senator Dick Durbin, a Democrat, the President of the United States used the word (this being a family publication I will clean it up) “s-hole” to describe Haiti and Africa in a discussion about immigration. According to others present, not so. Reported The Week:

Purdue said on ABC's This Week that the quote is a ‘gross misrepresentation’ of Trump's remarks, while Cotton said in a CBS interview that he ‘didn't hear’ it, and Nielsen said on Fox News Sunday that she doesn't ‘recall him saying that exact phrase.’”

But let’s put aside the “did he” or didn’t he” aspect of this. For the sake of discussion, let’s assume he said it.

The real story here is the media’s massive attack of hyperventilation over this. It reminds of nothing so much as your average American junior high school where breathless just-pubescents are gossiping aghast and agog at the latest titillating rumor about what happened in science lab. And doing so with malicious intent.

Let’s take a stroll through memory lane. It is the mid-nineteen sixties and the president is Democrat Lyndon Johnson. Here is this description of LBJ from historian Doris Kearns Goodwin, who at the time was a young aide to Johnson. She says in this C-SPAN interview that she would have conversations with the President when he was in the bathroom. This was a regular occurrence. And she wasn’t alone. She describes then-national security advisor McGeorge Bundy —  a prim and proper former Harvard Dean —  of being thus summoned while LBJ was on the toilet doing his, um, duty.

Bundy reluctantly comes in but stands by the wall, back to the defecating President. LBJ, irritated, keeps telling him to “come closer, come closer” and Bundy, still with back to his chief, does so. Until, LBJ would later recount to Goodwin,  LBJ barks that he’s in danger of sitting on the President’s lap. There was also the sight of the President occasionally urinating in the sink, exposing his private parts and so on. Now read this from historian Robert Dallek’s LBJ biography Flawed Giant: Lyndon Johnson and His Times 1961-1973.

“Almost all of Johnson’s outrageous personal behavior was hidden from the public. In the sixties, journalists largely kept their knowledge of presidential transgressions of the sort Johnson committed to themselves. And not just because current mores dictated such journalistic restraint; reporters and publishers, who had been a partisan force against (1964 GOP presidential nominee Senator Barry) Goldwater, were reluctant to undermine someone as progressive as LBJ. True, privately, he was sometimes a Neanderthal whose crudeness offended them, but in public he was an unflinching advocate of social reforms that promised large improvements in the lives of all Americans, particularly minorities and women. And the media, reflecting the current national mood, found much to say for a President with a genuine passion for righting historic wrongs.”

To say that there is a liberal media bias is to understate. Think of all the media air time and print space devoted to the Trump “s-hole” remark. CNN alone is reported to have used the entire word 195 times, as reported right here at NewsBusters by Tim Graham. Reported Tim:

“In the contest for Most Offended News Network after President Trump reportedly referred to African nations as “s***hole” countries, CNN wins hands down. NewsBusters staff combed through CNN transcripts on Nexis for the S-hole word in the 24 hours of January 12 – the first full day after The Washington Post reported the controversy – and found CNN staffers and CNN guests uncorked the profanity 195 times in one day.

That doesn't count Saturday, Sunday or Monday. They could be headed for 1,000 by now. It also doesn't count the amount of time they put the S-word on screen (sometimes twice, as you can see on Cuomo's temporary prime time show.)

Compare that to Fox News Channel. Their curse count was zero. FNC told staff and guests not to say it.”

Fox reported the story, they just didn’t use the word whole.

What one was seeing in all of this was yet another bold example of a liberal media double standard at work. And for a reason. Just as the liberal media of the 1960s would not report on Johnson’s crude and “Neanderthal” behavior because they considered him to be “progressive”, so now in their monumental hatred for Trump they will take one curse word and magnify it a zillion times over to paint Trump as in fact LBJ really was. There has never been a single story in Trump’s entire career that he summons staff members to discuss whatever while he sits on the toilet.

There have been zero reports of his urinating in a sink. But that doesn’t mean a thing, because in fact Trump is the Great Disrupter of the Washington Way of Doing Things, he’s a Republican and he does dastardly things like appoint conservatives to the Supreme Court and the lower federal courts. And, of course, more.

Which, in the mind of the liberal media, gives them license to do to Trump that which their predecessors staunchly resisted doing to LBJ.

This past week marked the 20th anniversary of the birth of the Clinton-Lewinsky scandal. Recall, as many have been doing, how the story broke. Here is the headline:

Over here at The Daily Wire the significance of this headline, broken by Matt Drudge’s Drudge Report, is written up this way by reprinting the exact story as Drudge reported it, headlines and all:

“At the last minute, at 6 p.m. on Saturday evening, NEWSWEEK magazine killed a story that was destined to shake official Washington to its foundation: A White House intern carried on a sexual affair with the President of the United States!

The DRUDGE REPORT has learned that reporter Michael Isikoff developed the story of his career, only to have it spiked by top NEWSWEEK suits hours before publication. A young woman, 23, sexually involved with the love of her life, the President of the United States, since she was a 21-year-old intern at the White House. She was a frequent visitor to a small study just off the Oval Office where she claims to have indulged the president's sexual preference. Reports of the relationship spread in White House quarters and she was moved to a job at the Pentagon, where she worked until last month.

The young intern wrote long love letters to President Clinton, which she delivered through a delivery service. She was a frequent visitor at the White House after midnight, where she checked in the WAVE logs as visiting a secretary named Betty Curry, 57.

The DRUDGE REPORT has learned that tapes of intimate phone conversations exist.”

There was more. Oh so much more. But the essence here is that just as the 1960s liberal media refused to report on LBJ’s behavior, so the 1990’s liberal media was determined to spike the story of the decade because it would damage the progressive Bill Clinton. There was no Internet and no Drudge in the 1960’s. But both had arrived by 1998  — not to mention Fox News and talk radio - and Clinton wound up getting impeached.

Now? Now this decades-old battle is on yet again. Just as the liberal media protected LBJ and tried to protect Bill Clinton, so now they have made it their goal in life to destroy the Trump presidency. This is the core of what the endless Trump-Russian collusion stories are about. Not to mention the attempt to revive the Trump-sexually-harrassed-these-women stories. And others.

In this case? One common curse word is enough for the liberal media to work with - to spend endless hours discussing, publicizing, analyzing, embroidering and more.

They do it, of course, for a reason.

But this time Americans are on to the game.