CNN Leaps Into The Toilet: Network Aired 195 Uses of 'S***hole' on Friday 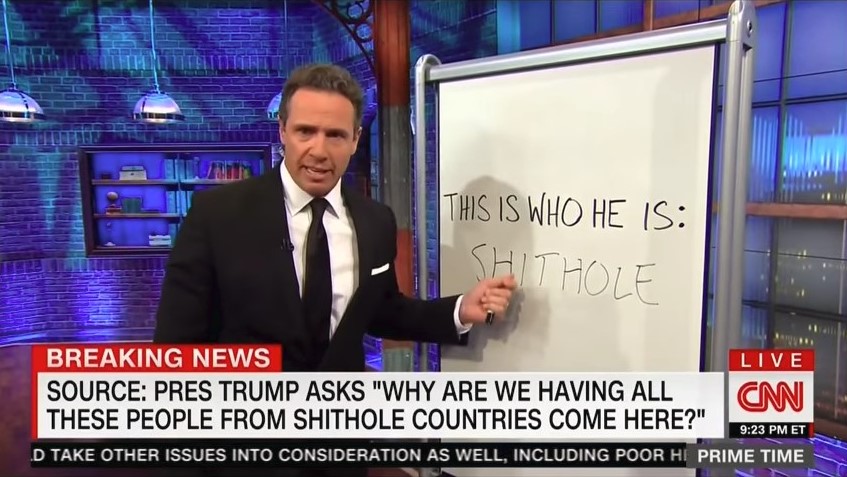 In the contest for Most Offended News Network after President Trump reportedly referred to African nations as “s***hole” countries, CNN wins hands down. NewsBusters staff combed through CNN transcripts on Nexis for the S-hole word in the 24 hours of January 12 – the first full day after The Washington Post reported the controversy – and found CNN staffers and CNN guests uncorked the profanity 195 times in one day.

That doesn't count Saturday, Sunday or Monday. They could be headed for 1,000 by now. It also doesn't count the amount of time they put the S-word on screen (sometimes twice, as you can see on Cuomo's temporary prime time show.)

Compare that to Fox News Channel. Their curse count was zero. FNC told staff and guests not to say it.

ABC, CBS, and the PBS NewsHour were also zero, and the NBC Nightly News uncorked one on January 11. FCC obscenity regulations apply only to broadcast TV stations between 6 am and 10 pm, so cable networks can let it fly without any fear of fines. 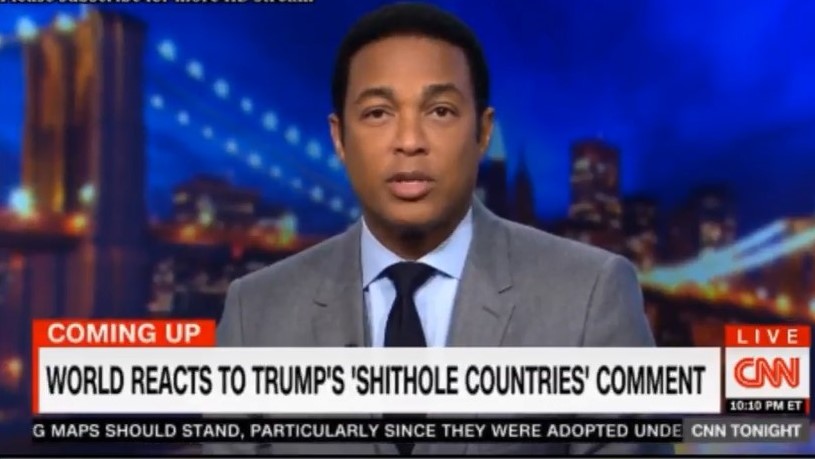 Some hours of Friday were much more aggressive in their use of the word. Don Lemon’s show CNN Tonight used 33 S-bombs -- 22 in the 10 pm hour, and another 11 at 11 pm. Lemon did everything but ask if the missing Malaysian jet vanished into an S-hole.

Lemon lectured "it was people from what he calls shithole countries who built this country, who built the White House. Nothing that Donald Trump says can change that."

Technically there were 196 S-bombs, since Van Jones noted in Lemon's space “I understand what he actually said was shithouse, and so he didn't say shithole.” Also technically, Nexis showed no CNN transcript from 3:15 to 4:00 am. (We typically don't record overnight.)

CNN’s New Day also rolled out 33 S-bombs in its three hours from 6 am to 9 am. Let’s hope the soccer moms didn’t watch Cuomo and Camerota on Friday. By contrast, Wolf Blitzer’s and Erin Burnett’s hours only aired two apiece.­

The cursing cavalcade was cheered by CNN’s Jeff Yang, who despised reporters beating around the hole: “I'm proud that the great majority of CNN's anchors and correspondents -- including Jim Acosta, Anderson Cooper, Don Lemon, Phil Mudd, Jake Tapper and Brian Stelter -- did not do so.”