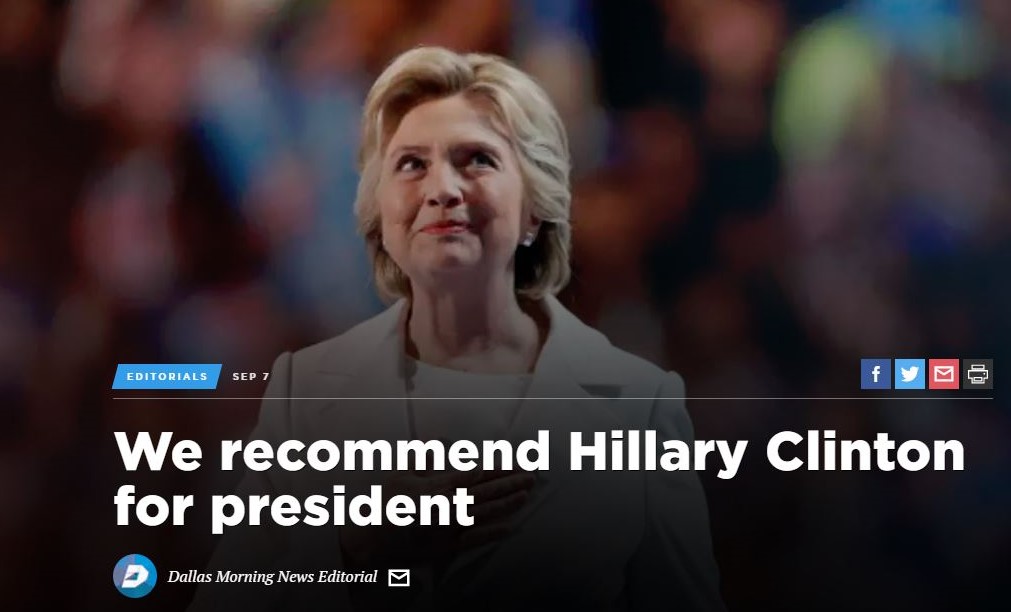 With just three weeks to go, major newspapers (with a circulation of at least 50,000) are walloping Donald Trump in their official endorsements, favoring Hillary Clinton by a count of 68 to zero.

Out of a total of 82 newspapers that have offered an editorial on who their readers should vote for, 68 (83 percent) of them have endorsed Hillary Clinton, five (6 percent) recommended Libertarian Party candidate Gary Johnson, two (2 percent) advised to vote for anybody but Trump and seven (9 percent) newspapers offered no endorsement at all.

While other major newspapers like The Wall Street Journal, New York Post and The Philadelphia Inquirer have yet to issue an official editorial recommendation, it’s clear that Clinton will have an overwhelming lead in newspaper endorsements heading into Election Day.

What’s particularly unique to this presidential cycle is the number of newspapers (19) that switched from endorsing the Republican nominee in 2012 to picking Hillary Clinton. And while some of those papers have made the argument that Trump is not a reliable conservative, that doesn’t mean they have to go all the way in endorsing the liberal candidate. As The Washington Times pointed out “Clinton’s lifetime ACU rating of 8.13 is only two points higher than both Mr. Sanders’ 6.2 percent lifetime rating and Ms. Warren’s 6 percent rating. All three of the presidential hopefuls are lower on the ACU’s scale than Mr. Obama, who has a lifetime rating of 10 percent.”

Yet some of the papers that switched from Romney to Clinton have attempted to justify their selection by claiming Clinton is “bipartisan,” “pragmatic,” and a “centrist.”

The following descriptions of Hillary are from newspapers that switched from Romney in 2012 to Hillary Clinton in 2016:

“In Clinton’s eight years in the U.S. Senate, she displayed reach and influence in foreign affairs. Though conservatives like to paint her as nakedly partisan, on Capitol Hill she gained respect from Republicans for working across the aisle: Two-thirds of her bills had GOP co-sponsors and included common ground with some of Congress’ most conservative lawmakers.”
— September 7 Dallas Morning News editorial “We recommend Hillary Clinton for president.”

“As senator of New York, she earned respect in Congress by working across the aisle and crafting bills with conservative lawmakers....Clinton has been criticized as being hawkish but has shown a measured approach to the world’s problems.”
—  September 23 Cincinnati Enquirer editorial “Enquirer: It has to be Hillary Clinton”

“Hillary Clinton has long been a centrist. Despite her tack left to woo Bernie Sanders supporters, Clinton retains her centrist roots. Her justices might not be in the mold of Antonin Scalia, but they will be accomplished individuals with the experience, education and intelligence to handle the job. They will be competent. Just as she is competent.”
— September 27 Arizona Republic editorial “The Arizona Republic editorial board endorses Hillary Clinton for president.”

“This is what you’re going to get with Hillary – tough negotiations that yield pragmatic results.”
— Florida Sun Sentinel September 30 editorial “Sun Sentinel Editorial Board endorses Hillary Clinton for president”

“As a U.S. senator, the Democrat showed she can collaborate with Republicans, using what Roll Call labeled an ‘incremental approach” that ‘could help restore a working’ relationship between the White House and Capitol Hill that has been in tatters” for years....This paper has not endorsed a Democrat for president in its 148-year history. But we endorse Clinton. She’s the safe choice for the U.S. and for the world, for Democrats and Republicans alike.”
— San Diego Union Tribune September 30 editorial “Why Hillary Clinton is the safe choice for president”

“Conservatives fear Clinton will tip the court to the left. Unfortunately, the Senate is obstructing a centrist jurist appointed by Obama, Merrick Garland. The great irony of this election is Clinton is a centrist, pulled left by Bernie Sanders, and Trump is anything but a reliable conservative. We need a president who can deliver a clear message at home and abroad.”
— Desert Sun September 30 editorial “Hillary Clinton the right choice in historic election.”

“The art of compromise, which once was respected by Republicans and Democrats in Congress, and which allowed for progress rather than gridlock, is one that Clinton understands and practices. She demonstrated that not only in the Senate, but as the nation’s chief diplomat.”
— The Columbus Dispatch October 9 editorial “For president | Trump unfit, Clinton is qualified.”

“Like her husband, President Bill Clinton, she has built a political career out of triangulating to the center. She’s less liberal than President Barack Obama and less conservative than President George W. Bush — and after 16 years of volatility, she is likely to maintain the slow growth of the status quo.”
— Birmingham News, October 9 editorial “Endorsement: We’re with Hillary Clinton. Frankly, Donald Trump’s dangerous.” (Identical editorial in sister publications Press-Register (Mobile) and Huntsville Times.

“Clinton would surely lead a vigorous, activist presidency, including a bipartisan drive to ‘pass the biggest investment in new, good-paying jobs since World War II.’ At the same time and crucially, she is more muscular on the international stage than much of the party would like. It took steel for Clinton to unequivocally advise Obama to greenlight the high-risk mission that killed Osama Bin Laden while Trump offers the brass of pretending that his every wish will be the world’s command.”
— New York Daily News July 28 editorial ”Daily News Editorial Board says Vote Hillary Clinton: She’s the best choice for President, while Donald Trump represents a clear and present danger to the republic.”