Sucking Up to Sanders: Liberal Media 'Feels the Bern' 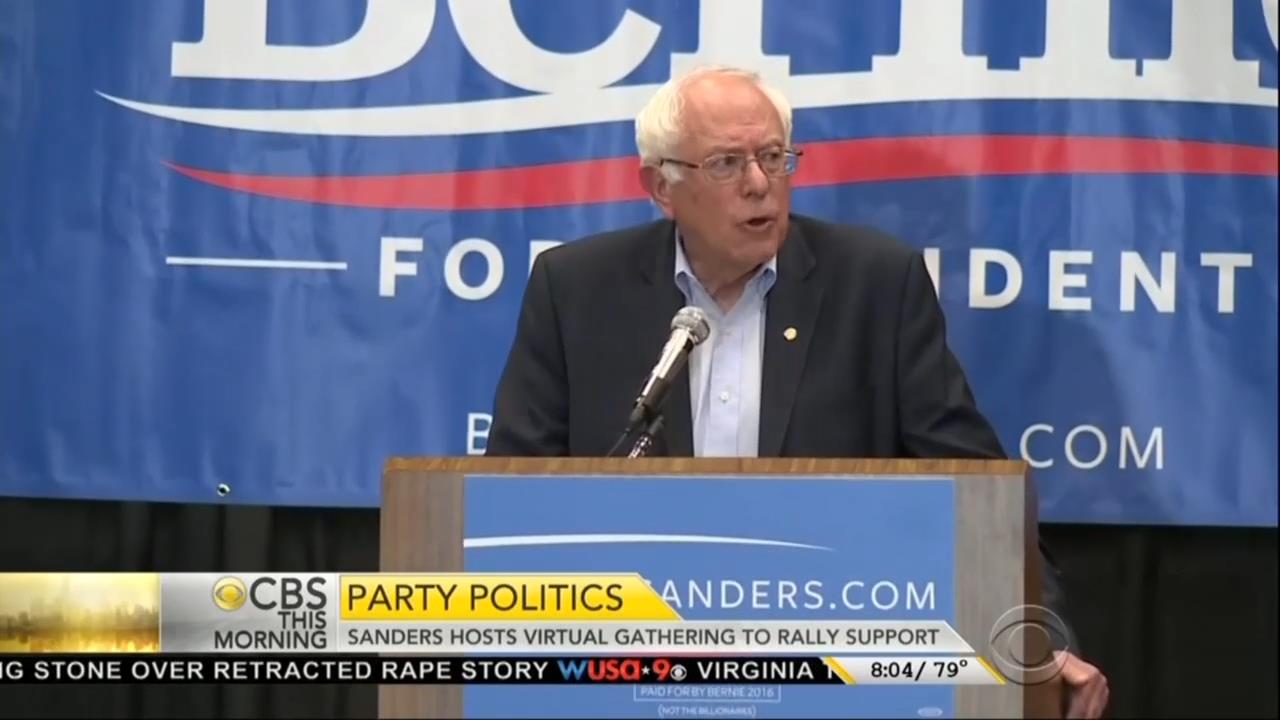 With polls showing Vermont Senator Bernie Sanders running neck and neck with  Democratic frontrunner Hillary Clinton in Iowa and New Hampshire, it’s clear Sanders has benefitted from his own cheering section in the liberal media.

Instead of laughing off the candidacy of a candidate who is so left he spent his honeymoon in the USSR, members of the media couldn’t contain their excitement over how Sanders could energize the Democratic base and pull Hillary Clinton even further to the left.

While Sanders’ extremism is ignored or even celebrated, any Republican that tilts to the right can be vilified. This is the same media that depicted the milquetoast mainline 2012 GOP ticket of Mitt Romney and Paul Ryan as “vicious” and “dangerous.”

The cheering for Sanders began as early as this summer when ABC’s Cecilia Vega roared that Hillary Clinton was “Feeling the Bern” and touted “Bernie-mentum” was “drawing larger crowds than every candidate running” in 2016. CNN’s Chris Cuomo admitted “We, and a lot in the media, were encouraging of Bernie Sanders getting in the race, because the senator from Vermont does provoke a lot of passion from the left part of that party.” And hosts like PBS’s Charlie Rose were assuring Sanders that his policies were “not radical ideas.”

The following are just a few examples from the MRC’s archive of liberal reporters, hosts and celebrities championing the out and proud socialist:

I Keep Telling You Bernie, Your Ideas Are “Not Radical”

Host Charlie Rose: “I’m the first person trying to argue you away from the idea that you’re a socialist....I’m just trying to argue that a lot of people believe what you do about those kinds of issues. They believe there are too many people in jail. There are too many people coming out and not having a place to go and they’re back in jail....There are a whole lot of people who believe the first step towards income equality or to eliminate income inequality is a $15 an hour minimum-wage and that’s been enacted in certain cities already. I’m just saying, these are not radical ideas.”
Democratic presidential candidate Bernie Sanders: “Right. That’s right! They’re not radical ideas.”
— Exchange on PBS’s Charlie Rose, October 26.

“She may be the Democratic front-runner, but this morning [Hillary] Clinton is ‘feeling the Bern.’ Challenger Vermont Senator Bernie Sanders seeing a massive turnout at a campaign rally overnight in Maine, that at times felt more like a rock concert. In recent days, ‘Bernie-mentum’ drawing larger crowds than every candidate running in the 2016 race for the White House.”
— Correspondent Cecilia Vega on ABC’s Good Morning America, July 7.

“We, and a lot in the media, were encouraging of Bernie Sanders getting in the race, because the senator from Vermont does provoke a lot of passion from the left part of that party. We thought that that would be an interesting mix of ideas because, certainly, the Clintons are more known for the centrism that they present to the Democrats.”
— Co-anchor Chris Cuomo on CNN’s New Day, August 19.

“Bernie Sanders could be good for Hillary Clinton by focusing the campaign more on economic issues. Let’s list two names who we don’t get to talk about, Eugene Debs and Norman Thomas. This is the most serious socialist candidacy for President since they ran. But Bernie Sanders has a long list of particulars that he wants to put on the table, and I think by shifting the campaigns to economics, he will generally help Democrats.”
— Ex-New York Times and Washington Post political reporter E. J. Dionne on NPR’s All Things Considered, May 1.

“Eight years ago, Barack Obama offered a message of hope and change, presenting himself as a leader from a new generation. This time around, Democratic imaginations and hearts are fired up by a white-haired 74-year-old socialist who is riding a populist surge.”
— AP’s Catherine Luce on September 21.

“You’ve been preparing for this your whole life in some ways....You’ve turned out these big crowds. You inspired 200,000 volunteers. You moved people....It is a remarkable thing, as a liberal, to see the success you’re having, the resonance that your message is having and I don’t know what’s going to happen in the campaign long term, but good luck to you, sir.”
— MSNBC’s Rachel Maddow to Democratic candidate Bernie Sanders on The Rachel Maddow Show, September 17.

“There’s no question that Bernie Sanders is talking to a progressive wing of the party. I don’t know, maybe there will be a socialist wing of the Democratic Party out of this.”
— Longtime ABC, CBS and CNN political correspondent Jeff Greenfield on the September 10 edition of The Last Word with Lawrence O’Donnell on MSNBC.

“A Clinton-Sanders ticket would, of course, put the American right on suicide watch....You’d certainly see right-wing media entities do everything within their power to try to stop a Clinton-Sanders ticket from winning on November 8, 2016. Yet they’d likely fail — and their failure would finally put the corpse of Reaganism into the ground once and for all. Sanders is the living refutation of Reaganism, and the vice presidency would provide an effective bully pulpit to push back against the false arguments made by those who still worship the false idol who was the 40th President of the United States.”
— Washington Monthly blogger D.R. Tucker, June 27.

“Meanwhile, they have Bernie Sanders out there, you know, stating a case. And many of them probably don’t agree with everything he has to say, but it’s just so wonderful and refreshing to have somebody saying some of these things.”
— Boston Globe national political reporter Annie Linskey on MSNBC’s The Rachel Maddow Show, August 12.

“Fearless” Bernie is “No Kook”

“In democracy, the voters decide who wins a presidential election. But the media has great influence over which candidates get serious consideration. So when it comes to Sen. Bernie Sanders of Vermont and the 2016 race, it’s clear that he’s getting a raw deal. It’s long since time the press gave him the respect he deserves....The fact that he is utterly fearless in advocating for Scandinavian-style democratic socialism is no reason to treat him like a kook.”
— National correspondent Ryan Cooper writing in The Week, May 26.

“Out on the stump, he doesn’t mention Hillary Clinton or Jeb Bush. For now, he’s running against the Koch brothers....Senator Bernie Sanders of Vermont, as unabashedly progressive as Ben & Jerry’s....Sanders rails against the corrupting influence of money in politics. He stands for economic justice....He’s not just for raising the minimum wage, he wants to double it.”
— ABC’s David Wright on This Week, February 22, talking about Sanders’ potential presidential campaign.

“Aroused” Behar is “Feeling the Bern”

Host Whoopi Goldberg: “But one of the standout moments apparently was how Bernie Sanders shut it down when Hillary Clinton was asked about her personal e-mails.”....
Host Joy Behar: “I thought that Bernie was so menschy in that moment like a real guy. I actually am aroused by him. I’m serious. I find him to be eye candy, not ear candy, eye candy.”
Host Michelle Collins: “He turns you on?”
Behar: “I like an old Jewish guy who's a socialist. That’s my type of guy. Everybody is talking about O’Malley and how hot he was, but to me Bernie is hot.”
— Exchange on ABC’s The View, October 14, 2015.

“I have always had the most profound respect for [Hillary Clinton]....I just think she has accomplished more than most people have accomplished in about five life times. But I love a lot of what Bernie Sanders is saying too, man. I find him really inspiring. I think he’s tremendous and we need a jolt of that.”
— Ex-Crossing Jordan star Jill Hennessy on Bloomberg’s With All Due Respect, October 16.