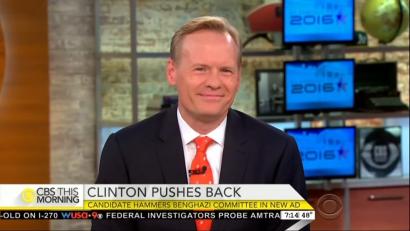 It's bad enough that he met privately with the candidate campaign teams before the debate. But as his time as a CBS correspondent, anchor of Face the Nation and writer for Slate and Time magazine Dickerson has advised Barack Obama to “destroy the GOP,” told Hillary Clinton she was “transparent” on the e-mail scandal, and urged the ultra-liberal Elizabeth Warren to join the 2016 race.

On the other hand, he chided the Benghazi committee for “fighting like cats and dogs” and called CNBC editor Rick Santelli’s rallying cry that inspired the Tea Party movement “clownish.”

The following are just some of Dickerson’s most liberal quotes from the MRC’s archive:

Dickerson to Hillary on E-Mails: “You’ve Been Transparent”

“You talked a lot about transparency, that, when you think about trust, there’s been a lot of talk about that in your campaign and voters having questions, they have questions. Maybe related to this, trust and transparency are related, you’ve been transparent in the release of these e-mails, but what about before? Because there was a period where you held on to the whole kit and caboodle before any investigators were asking for it long after you were out of the State Department.”
— CBS’s Face the Nation anchor John Dickerson to Hillary Clinton, September 20.

Dickerson Chides Benghazi Committee for “Fighting Like Cats and Dogs”

“Well, the committee was fighting like cats and dogs between the Republicans and Democrats, but the Republicans — the majority on the committee, had a special challenge, which was to keep the questioning always focused on the central idea of why did this happen, and that was important for substantive reasons, but also because there have been charges that this is a totally political affair. This is the eighth investigation. They’re just going after Hillary Clinton. While there were moments that illuminated things we already knew about this tragedy, there were also moments where the questioning was quite secondary to that central question of why did this happen?”
—  John Dickerson on CBS Evening News with Scott Pelley, October 22.

“She got a political gift by Kevin McCarthy....when he suggested the Benghazi committee had driven down her poll numbers. And so she’s showing off that gift, wants everybody to see it because for so long the Clintons have been trying to argue that this Benghazi investigation and the e-mail investigation that grew out of it was politically motivated.”
— CBS’s John Dickerson on This Morning, October 6.

“In New Jersey the ruthlessness of the [Chris] Christie operation bled over into its abuse of power, but so far there is no connection between Christie and his aides. In the Blair documents, Clinton is ruthless in conversation in a way that we never have seen with Christie. It’s gripping reading, but it’s more figurative than real; Clinton couldn’t abuse power because as first lady she had none. Furthermore, the machismo displayed in private conversations with a friend requires a caveat. It’s possible that Clinton, powerless and under siege, talked tougher on the phone precisely because she couldn’t follow through in real life. Abuse of power is not the only downside of ruthlessness. The danger is that it can lead to an all-consuming vindictiveness. There is nothing wrong per se with an enemies list of the kind reported in HRC. In a business of leverage and power, it’s almost a best practice.”
— John Dickerson in a February 11, 2014 Slate.com piece headlined: “Not all cutthroat politicians are the same.”

“The President who came into office speaking in lofty terms about bipartisanship and cooperation can only cement his legacy if he destroys the GOP. If he wants to transform American politics, he must go for the throat....Obama’s only remaining option is to pulverize. Whether he succeeds in passing legislation or not, given his ambitions, his goal should be to delegitimize his opponents.”
— John Dickerson in a January 18, 2013 Slate.com article headlined: “Go for the Throat! Why if he wants to transform American politics, Obama must declare war on the Republican Party.”

Co-host Charlie Rose: “So the question is what happened to [House Majority Leader Kevin] McCarthy? What’s happening to the Republican Party? And is the tail wagging the dog?”
Correspondent John Dickerson: “Well, there’s wagging all over the place. I mean, the dogs are running amock.”
— Exchange on the October 9, 2015 CBS This Morning about House conservatives and the fight over the next Speaker.

“But he [John Boehner] had the high and the low yesterday, spending time with the Pope and then three hours with those conservatives who are giving him a lot of trouble on trying to keep the government open and funded when money runs out at the end of September.”
— John Dickerson on CBS This Morning, September 25.

“On Wednesday, Barack Obama unveiled a $275 billion plan to shore up the housing market and forestall some future home foreclosures. It prompted an impassioned, scattershot, and ultimately clownish response from CNBC’s Rick Santelli. Without apparently reading the plan, he railed that ‘government is promoting bad behavior’ and that the plan was an effort to ‘subsidize the losers’ mortgages.’ He then turned to rally the traders around him who booed. Waving his arms like a frustrated conductor, Santelli asked: ‘How many of you people want to pay for your neighbor's mortgage for a house that has an extra bathroom and can’t pay their bills?’ A fellow on the trading floor yelled: ‘How about if we all stop paying our mortgage. It’s a moral hazard.’ Someone may also have yelled ‘Go Bears!’....The clip — soon known as the Santelli Rant—became an instant overhyped sensation.”
— John Dickerson in February 20, 2009 Slate article headlined: “Rant for Rant, Obama’s populist smackdown over his housing plan.”

If Scott Brown Wins, “It’s Going to Get Uglier” in Washington

Katie Couric: “So, John, what happens to health care reform if [then GOP Senate candidate] Scott Brown wins?....If this seat goes Republican, how will it change the political climate in Washington?”
John Dickerson: “It’s going to get uglier. Republicans, no matter what the outcome is, feel emboldened, they feel excited and they see glory in attacking the President. Democrats, on the other hand, have to really fight hard against that sentiment. The President’s getting into that fight, pushing a populist message, and so in the end it’s just going to get a lot uglier in Washington.”
— Exchange on CBS Evening News, January 19, 2010.

George W. Bush Looks “Suspiciously Like the Eco-Villain Al Gore Warned Us About”

“Bush abandoned a campaign pledge to reduce carbon dioxide emissions, rejected the Kyoto global-warming treaty, suspended new arsenic standards for drinking water —  and began to look suspiciously like the eco-villain Al Gore warned us about.”
— John Dickerson and James Carney the April 30, 2001 issue of Time magazine in an article headlined: “The Busiest Man in the White House, As Bush Hits 100 days in office his top strategist, Karl Rove, is already eyeing 2004. His latest task: cleaning up W.’s anti-environment image.”

“Why is the president talking about Rush Limbaugh? President Obama brought it up in the context of talking to Republicans. He said, ‘look, if we descend into something where you’re following what Rush Limbaugh says, we’re not going to get anything done.’ And some Democrats said, why is he giving Rush Limbaugh all this good air time, making Rush into such an important figure? Isn’t that a big mistake? Well, no because with George Bush gone, the only — the second most unpopular person in the Republican firmament in the public’s mind is Rush Limbaugh. And so what Obama is doing in a subtle, but also not so subtle way is putting those people who would oppose him in the Rush Limbaugh camp. And so that creates political peril for them.”
— John Dickerson on PBS’s Washington Week, January 30, 2009.