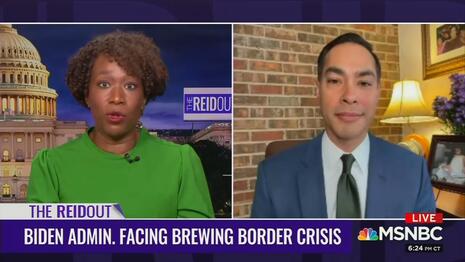 To assist her, Reid invited on former Secretary of Housing and Urban Development and open-border advocate Julian Castro, who blamed the current inundation of immigrants at the southern border on the Trump administration.

Without merit, Reid cartoonishly accused Republicans of being "afraid of these brown people," since they haven't been enthusiastic about open borders and economic and national security consequences that come with it.

Indeed, The ReidOut host shamelessly accused Fisher and conservatives of "doing what they normally do" by ginning up "fear" and promulgating "the brown scare":

"Well, you know, what, of course, the right does, they’re sort of back in sort of their kind of default mode, which is to portray these people as, you know, potentially terrorists. You heard Lindsey Graham basically say, these children are going to grow up to be terrorists, to do the brown scare, to say the Democrats just want to add more brown people, because they know, if they become citizens, they will vote for Democrats. Like, all of the things that they use to gin up their base of mainly white Americans, who — white working-class Americans who, you know, fear that their jobs are all going to be taken by these people who are — I mean, they’re doing what they normally do. I’m going to play just a little bit of a Fox News reporter asking Jen Psaki some questions."

Senator Lindsey Graham (R-SC) was another target for the vile host's ire. In fact, immigrants have shown propensity to vote for and support the Democratic Party.

Reid then played a selectively edited clip of Wednesday’s White House briefing in which Fisher grilled Psaki on whether or not there’d be any sort of limitation on how many children the administration would welcome with open arms.

Completely at odds with the chyron “Biden Admin. Facing Brewing Border Crisis," Castro unabashedly proclaimed: “I don’t consider this a crisis.” Offering no pushback whatsoever, the left-wing host went on to decry the right for lacking “compassion” for, ironically, prioritizing the welfare of Americans and law-abiding immigrants.

Irrespective of political ideology, unrestricted immigration has the ability to affect all of our lives and, therefore, should spark an intellectual debate. For Reid, however, it’s much easier to outright dismiss immigration-related concerns as racism and bigotry.

MSNBC’s inexorable demonization of conservatives for expressing genuine concerns about uncircumscribed immigration was brought to you, in part by, LegalZoom. Contact this advertiser and others via the Media Research Center’s Conservatives Fight Back page, conveniently linked here.

JOY REID: While the Biden administration is slowly dismantling the harsh asylum policies of his predecessor, they say they’re still trying to back single — they’re still turning back single adults and some families just not unaccompanied children. Now, of course, Republicans have been quick to demagogue the issue for their political benefit. House Minority Leader Kevin McCarthy traveled to an El Paso border facility on Monday to blame the president for the influx of migrants and a Republican super PAC is now running ads accusing Biden of opening the border, echoing similar claims from GOP lawmakers who should know better. They’re all charge as Biden summarily rejected in his interview with ABC News.

REID: Secretary Mayorkas already pushed back on the accusation that the recent uptick in border apprehensions represents a crisis, given what happened under the last administration. Take a listen.

MICHAEL MCCAUL [CONGRESSMAN (R-TX)]: I agree with you. It is going to be the most we have seen in 20 years. You may call that only a challenge, but I call that a crisis.

DHS SECRETARY ALEJANDRO MAYORKAS: A crisis is when a nation is willing to rip a nine-year-old child out of the hands of his or her parent and separate that family to deter future migration. That, to me, is a humanitarian crisis.

REID: Joining me now, the former secretary of housing and urban development in the Obama administration and former mayor of San Antonio, Texas, Julian Castro and, Secretary Castro, thank you for being here. You’re in a unique position to discuss this, as a Texan, as somebody who ran HUD, and also as a former mayor of a Texas city. Do you have a sense—can you, kind of, get your arms around what is the pull right now? The New York Times has some reporting that some smugglers, human smugglers may be telling migrants, look, this is the time to come. Biden is a better guy than Trump. He’s going to let people through, that that is getting people to come. Do you do know what the pull is? And you know what the push is from the Triangle countries?

JULIAN CASTRO: Well, I think, you know, what we saw over the last several years is Donald Trump [AUDIO CUTS OUT] policies like remain in Mexico.

REID: We’re having some trouble. There we go.

REID: Hold on. Let’s see if we can get your audio together. Your audio is a little choppy. So, hold on, guys, just for one second. Let’s just make sure that your audio is coming through. Start again, if you could.

CASTRO: So, Trump left our immigration system in tatters, through policies like remain in Mexico, through metering, through Title 42, which basically allowed him to expel thousands of people, to deny them entry, including over 13,000 children. So, he created a pent-up demand, this bubble of people who want to come in and claim asylum. And that’s part of what we’re seeing. It’s true that we have had people presenting themselves in waves. Before, we saw that under President Obama. We saw it in 2019 under Donald Trump. But Trump weakened our ability to handle these situations. And so, basically, Joe Biden is left to pick up the pieces of a human rights catastrophe that Donald Trump left at our doorstep. Now, the difference between the Trump administration and the Biden administration, when it comes to immigration, is that, with Joe Biden, you have someone who is competent. You have an administration that is actually taking the steps necessary to solve this challenge. You heard Secretary Mayorkas, but, among other things, they have increased the interagency cooperation. They have cut through a lot of the red tape to actually get these children who are unaccompanied into acceptable housing facilities, and then more quickly get them to host families, so that they’re with their sponsor host families in the country, instead of in one of these facilities. They also have done the compassionate thing, which is not to say no, not to reject an eight-year-old child or a 10-year-old child when they present themselves at the border unaccompanied. I think that reflects our values, as Americans. I don’t consider this a crisis. I agree that it is a challenge. It is something that can be effectively managed, and that the administration is effectively managing.

REID: Well, you know, what, of course, the right does, they’re sort of back in sort of their kind of default mode, which is to portray these people as, you know, potentially terrorists. You heard Lindsey Graham basically say, these children are going to grow up to be terrorists, to do the brown scare, to say the Democrats just want to add more brown people, because they know, if they become citizens, they will vote for Democrats. Like, all of the things that they use to gin up their base of mainly white Americans, who — white working-class Americans who, you know, fear that their jobs are all going to be taken by these people who are — I mean, they’re doing what they normally do. I’m going to play just a little bit of a Fox News reporter asking Jen Psaki some questions. Take a listen.

KRISTIN FISHER [FOX NEWS WHITE HOUSE REPORTER]: But is there a limit or cap to the number of unaccompanied minors that are going to be allowed into the U.S.?

PSAKI: So should we send some kids who are ten back at a certain point? Is that what you’re asking me?

FISHER: I’m — I'm not setting the policy here. I'm asking you what the Biden administration’s policy is.

PSAKI: Our policy continues to be, we're not going to send a 10-year-old back across the border. That was the policy of the last administration. That’s not our policy here.

REID: And, you know, there’s a poll out today, Reuters has a poll saying 22 percent of Republicans said in a poll this month they consider immigration to be the most important problem, up from seven percent. I mean, it’s back to the kind of the same thing that, you know-- of a -- there is a lack of sort of compassion on the other side. It’s just a fear that more brown people will come. How can the Biden administration manage that? Because the other side isn’t providing a political solution or offering to get on board immigration reform. They’re just saying, be afraid of these brown people.

CASTRO: Well, you’re right, Joy. I mean, this is part of their playbook. It’s something that we have seen so many times before. It is fearmongering and this time, they’re doing it because they can’t argue with the Biden administration in terms of serving the needs of everyday Americans. The American Rescue Plan was just passed. Vaccine distribution is going along very, very well compared to what it was under the Trump administration. People are more confident now in the economy, and also that we’re going to get past this pandemic. So, what do they do? They go to the red-meat issue for their base, and they try and dehumanize these folks, many times a 12-year-old child, 16-year-old child that just is desperately trying to seek a better life. What the Biden administration can continue to do is to manage this effectively, and to do it consistently with our values as a country, do it compassionately, with common sense, humanely and — but we have to understand that Trump did everything that he could to leave our immigration system in tatters, so that it would be difficult to actually manage this. But, you know, as unprecedented as his actions were, as cruel as his actions were, when you consider how the Biden administration is handling this situation compared to the Trump administration, they’re doing it more effectively, but they’re also doing it more humanely and so I have confidence that they’re going to be able to handle this going forward.

REID: Yeah, I mean, they’re not -- when a family shows up, and you just literally take the child from them as they’re screaming and say, that’s going to deter future people, like, that’s as cruel as it gets.