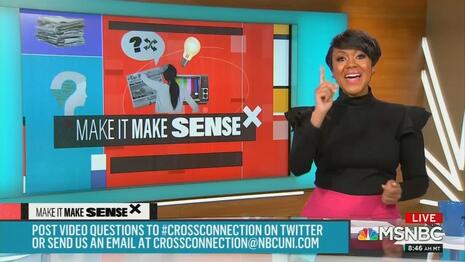 On Saturday, MSNBC’s Tiffany Cross unabashedly contended that the Federal Bureau of Investigation headquarters in the District of Columbia should be renamed after failed Democratic politician and left-wing activist Stacey Abrams.

During her badly named “Make It Make Sense” segment, in which she takes questions from viewers, Cross decried the FBI’s first director, J. Edgar Hoover, as a “racist tyrant,” a “homophobe,” and a “misogynist” who is unworthy of having the agency’s headquarters named after him. Cross shamelessly had the Bureau's new namesake already selected, and she couldn’t wait to tell viewers who she had in mind.

“I’ve got it,” Cross exclaimed. “How about the Stacey Abrams building?” The unhinged anchor then went on a race-baiting rant about minority oppression:

“If one woman could square off against a whole system that tried to suppress, oppress, and depress the descendants of the people who built this country for free and, who again, managed to save the country from itself, then, surely, we can dedicate the building representing equal protection under law after a real political warrior. In fact, I think I’ll take a detour and ride past the Stacey Abrams FBI Building on my way home today.”

It’s worth noting that Abrams has yet to concede to Georgia Governor Brian Kemp from the 2018 gubernatorial race. Abrams—who was one of President Trump’s most vocal critics—ironically levied baseless charges of voter suppression and election irregularities against the state of Georgia. Abrams even used the same language as the 45th President, stating that the election was “stolen from voters.”

The double standard is practically incomprehensible: When President Trump alleges that an election was stolen, he’s denounced by the leftist media as the ringleader of a domestic terror plot against American democracy; when Stacey Abrams uses the same exact language, she’s lauded by the mainstream media as heroine and left-wing journalists propagate the renaming of buildings after her.

Renaming the FBI headquarters after Abrams is tantamount to renaming the Washington Monument after Cardi B just because George Washington once owned slaves. The left’s relentless attempt to rewrite this nation’s history and cancel once-prominent figures is both detestable and un-American.

Tiffany Cross’ inexorable advocacy for the renaming of the FBI headquarters was brought to you, in part, Allstate. Contact this advertiser and others via the Media Research Center’s Conservatives Fight Back webpage, which is conveniently linked here.

The Cross Connection with Tiffany Cross

TIFFANY CROSS:  Welcome back to the Cross Connection, and like we always do at this time, we’ve got a big question, this week. So let’s jump right in and make it make sense.

GAIL GREGORY: My burning question is: in light of all the conversations and the actions for removing Confederate generals from military installations, buildings, statues, et cetera, has there been any discussion—as far as you know— about removing the name of J. Edgar Hoover from the FBI building?

CROSS:  Miss Gail from the A, the answer is yes. In fact, just in the past few weeks, members of Congress have announced legislation that would effectively rename the building and strip any references of Hoover from the FBI's Pennsylvania Avenue headquarters, but, actually, I'll let one of the congressmen tell you why in his own words.

GERRY CONNOLLY, CONGRESSMAN (D-VA): Hello. Gerry Connolly. I introduced H.R. 1290 to form a national commission to rename the J. Edgar Hoover FBI headquarters building. We need do this because frankly J. Edgar Hoover was a maligned character in American history. He was a racist who went after Martin Luther King in extraordinary ways. He was a homophobe; he was a misogynist. He was somebody who even denied the existence of the Mafia for decades, allowing organized crime to get a toehold here in the United States. It's time we rename that building after somebody who deserves it.

CROSS: I couldn’t agree more, Congressman. And considering this long, overdue moment of racial justice reckoning we’re navigating as a nation. Changing the name of our premier law enforcement agency so it doesn't honor a racist tyrant who trampled civil liberties, I don't know, seems like a pretty logical step to me. Now, if you don't know about J. Edgar Hoover, he lorded over the FBI as its first director for nearly 50 years, and he spent much of the 1950s, '60s obsessively trying to derail the civil rights movement, using tactics like illegal wiretaps, warrantless searches and other dirty tricks to spy on movement leaders like Dr. Martin Luther King, Jr. Hoover's FBI even sent Dr. King an anonymous letter attempting to blackmail him into committing suicide. It sounds crazy, but seriously just Google COINTELPRO. I’ve talked about it right here on this segment many times.

Now, we could spend hours discussing Hoover’s documented misogyny, homophobia, and spinelessness when it came to policing the mafia. Or, we can step into 2021 and rededicate the building to someone deserving. I've got it! How about the Stacey Abrams Building? If one woman could swear off against a whole system that tried to suppress, oppress, and depress the descendants of the people who built this country for free and, who again, managed to save the country from itself, then, surely, we can dedicate the building representing equal protection under law after a real political warrior. In fact, I think I’ll take a detour and ride past the Stacey Abrams FBI building on my way home, today.

Now, we did reach out to see if the FBI supports the renaming and a spokesperson said they don't comment on legislation, but that they are committed, quote, committed to all the communities they serve, bound by an oath to serve all citizens with equal compassion, professionalism, dignity, and respect.