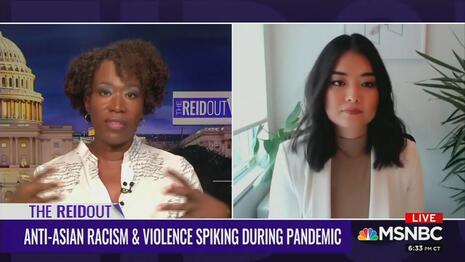 On Wednesday (before inexorably bashing Senator Joe Manchin), MSNBC’s police-loathing Joy Reid uttered one of the most illogical claims ever made on live television.

During a segment, which was supposed to be focused on the purported increase in hate crimes against Asian Americans, Reid contended that a greater police presence causes more violence and more crime: "More policing probably means more violence."

To discuss the apparent increase in violence against Asian American, Reid invited on Medium’s Michelle Kim. Once again, Reid denounced former President Trump as a racist and a xenophobe for—accurately—referring to COVID-19 as the China Virus, since it originated in Wuhan, China. Without evidence, Reid and Kim blamed the language and characterization of the virus used by the previous administration to explain the recent incidents of Asian victimization.

Toward the end of the interview, Reid asked Kim for her input on how to protect members of the Asian community from hate crimes. Reid suggested that increasing the policing force would lead to “more violence”:

Kim unabashedly responded that she doesn’t’ “think that policing is the answer.” Kim then praised individuals working with “anti-policing activists” and championed the cause for “community-based interventions.”

Providing Reid with literally one unfortunate example of an Asian person getting shot by the police, race-baiting Kim claimed that police presence is “threaten[ing]”:

So, I think it's important for us to acknowledge the source of that pain and be able to articulate and direct folks to seeing that more policing is not what's going to keep us safe, right, from what we've seen, we've had Christian Hall, who’s a 19-year-old teen in Pennsylvania who was shot by police while having a mental-health crisis. And while having more police may seem like the right solution, because right now we're all reacting to the violence that we don't want to see happen to our elders and our community. It is continuing to threaten our own people who are undocumented, who are LGBTQ, who are disabled, who are poor, who are continuing to face criminalization.”

Not only does Reid’s anti-cop claim go against common sense, it also contradicts various crime-related studies.

In her book “The War On Cops: How the New Attack on Law and Order Makes Everyone Less Safe,” Manhattan Institute’s Heather Mac Donald delineates what is known as the Ferguson effect—the idea that removing police from communities causes crime to increase. Mac Donald uses anecdotal and statistical evidence to prove that fewer police actually (wait for it) embolden criminals and make victims—especially minorities—much more vulnerable.

Irrespective of whether attacks on Asians have increased or decreased, removing police from the equation will exacerbate both violence and crime and jeopardizes the welfare of all law-abiding Americans.

Joy Reid’s virulent anti-police rhetoric and relentless blaming of former President Trump was brought to you, in part, by Discover. You can contact this advertiser and others via the Media Research Center’s Conservatives Fight Back page, conveniently linked here.

JOY REID:  A wave of anti-Asian violence is surging across this country, from New York City, where a 61-year-old man was slashed across the face, to San Francisco where an 84-year-old man died of injuries after getting slammed to the ground by a man who charged into him at full speed. The incidents have reached a crisis point, with Asian Americans now saying they're afraid to leave their homes or send their children back to school.

[CUTS TO CLIPS OF ASIANS DESCRIBING VIOLENCE AGAISNT THEM]

REID: The national coalition Stop AAPI Hate has documented at least 2800 incidents of anti-Asian racism and violence in the U.S. since the pandemic began, with the previous president repeatedly using Asian slurs to refer to COVID-19. Joining me now is Michelle Kim, co-founder and CEO of awaken. Michelle, I'm so glad you're here. Thank you for being here. You know, you wrote a piece on Medium that everyone should read, and I'll tweet it out when the show is over. But talk a little bit about this from a broader sense because it feels like a lot of this is concentrated around the pandemic and the previous president's characterization of it. To what extent is that it, is the fact that people are angry about COVID and just blaming any random Asian-American person they see?

MICHELLE KIM [CO-FOUNDER AWAKEN]: Yeah. Thank you so much for having me. This is an honor. Um, I think, you know, a lot of people are attributing the violence, the increase in violence to the rhetoric that President Trump, ex-President Trump, um, spewed over and over, calling COVID-19 a China virus, Kung flu virus. And while that rhetoric has definitely amplified and normalized anti-Asian violence, I think it's really important for us to remember that this violence is not new. It has been in existence since the 1800s, right? When we look at the history of this country and the ways in which that anti-Asian racism and xenophobia have manifested into policies like the Chinese Exclusion Act of 1882, to Japanese incarceration camps of the 1940s. We see that the rhetoric of yellow peril, or seeing Asian people as diseased, and taking away our jobs. That hateful rhetoric has been continuing and now we're seeing increased violence because, in part, the normalization of the rhetoric by the previous government, but also because of the lack of safety net that has been created—that’s creating so much scarcity in all communities right now.

REID: You know, it's interesting because, you know, the right is like freaking out about Dr. Seuss. But, I mean, I was looking at some of the cartoons, I mean, ignorant. I didn't know about this history of his. But a lot of those cartoons were deeply anti-Asian, and gross and disgusting, and it was directed directly at Asian Americans. Do you think that because, when we talk about racism in the country, we so focus on black-white? We just don't really talk about, um, the sort of anti-Asian bigotry that is in our society as well, because Asian Americans get put up as, well, that’s the model minority. Asian Americans don't have problems?

KIM: Yes, absolutely. I think that there's a lot of education that still needs to happen in terms of how do we talk about the Asian experience in America in a much more nuanced and complex way. And, I think, even in understanding the model minority myth, where the myth is really portraying Asians as a monolithic group, or people who have worked hard, put their heads down, they are apolitical and they have achieved success by, you know, working hard and being silent when it comes to social justice issues. And I think there's a portrayal of Asians as being successful. They are financially well off and they've been able to pick themselves up by the boot straps without support from the government. So, I think when we look at the model minority myth, it's really important we interrogate the history and origin of that term. Where, in the '60s, the model minority myth was born in direct opposition to what was happening on the ground, where black Americans were fighting for justice in the civil rights era and the model minority myth was born in order to juxtapose Asians from black folks, right?

KIM: By saying look, look at the good Asians, look at the good immigrants who are not causing trouble and look at the bad minorities they are out on the streets, protesting. They're not grateful for what they've been given. So, the notion of model minority is directly, um, anti-black.

KIM: Absolutely. And I think it's important for us to acknowledge why folks are calling for more policing, right? It is coming from a deep-seated fear and trauma of not wanting to see more violence happen to our elders and our communities. So, I think it's important for us to acknowledge the source of that pain and be able to articulate and direct folks to seeing that more policing is not what's going to keep us safe, right, from what we've seen, we've had Christian Hall, who’s a 19-year-old teen in Pennsylvania who was shot by police while having a mental-health crisis. And while having more police may seem like the right solution, because right now we're all reacting to the violence that we don't want to see happen to our elders and our community. It is continuing to threaten our own people who are undocumented, who are LGBTQ, who are disabled, who are poor, who are continuing to face criminalization. And so, I don’t think that policing is the answer, and I know that so many folks are working in tandem with anti-policing activists and building coalition across communities to find more community-based interventions.

REID: Absolutely. Michelle Kim, thank you so much for being here. I will tweet out your medium piece. Thank you so much, really appreciate you coming in and having this conversation.