Happy days are here again was the mantra Monday for the broadcast network morning news shows following the Senate’s passage of the massive spending boondoggle, deeming it a “landmark,” “sweeping,” and “hard-fought win” for President Biden as Democrats hope to win the midterm elections.

This was despite the fact that, tucked inside their exuberant segments, not only was President Biden barely involved in negotiations, but the so-called Inflation Reduction Act won’t be “provid[ing] any immediate relief” for struggling Americans and instead the bill “will take time” to hit them.

[W]hile the bulk of what's called the Inflation Reduction Act goes toward tackling climate change and boosting clean energy, it could lower the cost for prescription drugs for a lot of seniors. And it aims to increase revenue by raising the corporate tax to 15 percent for companies that are worth over a billion dollars.

Vitali came from the left, lamenting “the legislation saw its scope limited and price tags slashed thanks to moderate Democratic Senators Joe Manchin and Kyrsten Sinema, the bill's key architects” and questioned on whether they had too much “power and influence[.]”

In the 8:00 a.m. Eastern hour, Vitali exclaimed that her party was “riding high.”

Guthrie also spoke with senior White House correspondent Kelly O’Donnell so they could strategize on how their team will shrink the margins with Republicans in polls (click “expand”):

GUTHRIE: Kelly, you can't separate this kind of thing from politics. The midterms are upon us. President Biden has, you know, historically low approval ratings, record inflation, other setbacks. Now, he’s got a couple of legislative victories notched. You see the generic poll — that some of those polls coming up between the generic ballot, who’s preferred Republican or Democrat. That’s starting to tick up for Democrats. So, how does this all kind of play out?

O’DONNELL: Well, good morning, Savannah. The snapshot for the White House is they are eager to frame this as a win when you consider this legislation had been a part of a bigger Biden agenda that was long ago proclaimed dead. It comes at a time when the President has a series of positive events to tout, including a surprisingly high jobs number, a successful intelligence mission that killed the leader of al-Qaeda and a bipartisan piece of legislation that will bring high-tech manufacturing jobs to the U.S. The White House considers these signs that the President's policies are working, and he's been able to keep some of his promises.

[I]s relief finally in sight for so many Americans with that major victory for President Biden? Breakthrough. The Senate passing a sweeping economic package by a razor-thin majority, combating inflation, climate change, what it means for your health insurance, and costs of prescription drugs.

Co-host and former Clinton official George Stephanopolous also hailed “that big victory” for Democrats while congressional correspondent Rachel Scott did her part by praising her fellow liberals for having “banded together” to move “one step closer” to giving Biden “a major political victory.” 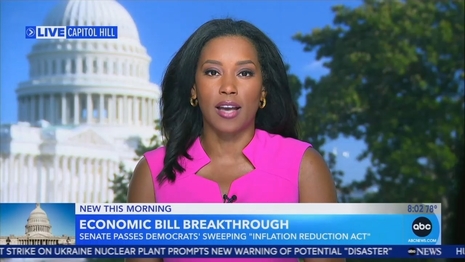 “On the Senate floor, Democrats jumping to their feet, erupting in cheers. Handing President Biden a political victory by a razor-thin majority,” she added.

Scott did concede that the bill — which would involve handouts to elites able to afford electric cars — would “take time” to have any impact.

Chief White House correspondent Cecilia Vega lamented it didn’t go as far as some Democrats wanted, but made sure to note that they had “been fighting for some of” the provisions “for decades” and would allow Biden to “mak[e] good on a campaign promise to bring financial relief to ordinary Americans[.]”

Of course, ABC put the emphasis on what their party needs to do for November (click “expand”):

VEGA: But look, Rachel just said this, we are 92 days out. Only 92 days from these midterms. Robin, the real question right now is whether Democrats can — can continue to see this momentum stick through November.

ROBERTS: But as you know, Cecilia, in our recent polling, a lot of Americans have a dim view on the economy and how the President is handling it.

VEGA: Yeah. Let me show you that poll right now. So take a look at this. More than two-thirds of Americans fear that the economy is getting worse and they're frankly — they’re blaming — uh, the President for that. Only 37% approve of the way that he is handling the economy right now. So, Robin, look, this is the — the reality for him. The midterms are already shaping up to be a referendum on his job performance, and frankly that of his party in Washington right now. 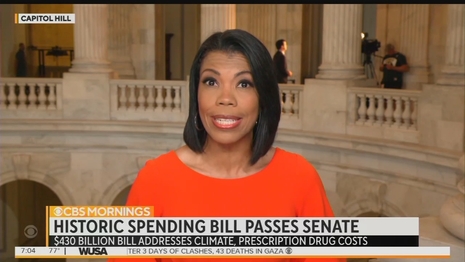 Congressional correspondent Nikole Killion was also psyched: “Democrats view it as a big win for the President and the party...Applause erupted on the Senate floor after vice President Harris delivered the tie-breaking vote to pass Democrats’ signature economic, health, and climate agenda.”

Killion admitted “only some of the bill's provisions would be felt immediately,” she explained Democrats “emphasized the significant long-term benefits.”

While O’Keefe said “this has been one of the most successful stretches of the Biden presidency,” he noted that the economy remains “the top concern for voters” and “none of this legislation provides any immediate relief for that” (click “expand”):

DOKOUPIL: With the President's approval ratings below 40 percent, Democrats are hoping that the bill can help improve their chances in the upcoming midterm elections...[O]n paper, it would seem like a good week last week for the President and the start of another good one this week, but the numbers don't suggest so much.

O’KEEFE: [W]hile Democrats didn't get everything they wanted, no matter how you slice it, this has been one of the most successful stretches of the Biden presidency. In addition to the health and climate bill expected to be passed later this week, consider all the other things that they’ve gotten done. There was a passage of major legislation boosting the high-tech manufacturing sector and a plan to provide federal aid to military veterans exposed to burn pits and other toxins, both of which the President plans to sign this week. Those follow passage this summer of a major gun control and mental health bill, and internationally, there's the Senate approval of a plan to let Finland and Sweden join NATO, as well as the successful killing of al-Qaeda's leader Ayman al-Zawahiri. CBS News has learned that, on the legislation, senior aides have had more direct contact with lawmakers on key details of the bill than President Biden has. The climate change and health bill has been the focus of really intense work here at the White House, especially the last ten days or so. But the President had no direct contact with Joe Manchin, that key Senate broker, until this weekend when he also spoke to a dozen other senators to ensure final passage. Polls won't give us a sense of whether this worked or not until about Labor Day. And remember, the top concern for voters remains the economy and inflation. None of this legislation provides any immediate relief for that.

As we at NewsBusters wrote last week, the liberal media had nowhere near the same reaction when Republicans passed their tax cut legislation in 2017.

Monday’s state-run TV operations were made possible thanks to the backing of advertisers such as Apple TV+ (on ABC), Fresh Pet (on NBC), and Kohl’s (on CBS). Follow the links to see their contact information at the MRC’s Conservatives Fight Back page.

To see the relevant transcripts from August 8, click here (for ABC), here (for CBS), and here (for NBC).

Special thanks to NewsBusters intern Aidan Moorehouse for assistance in transcribing the discussed segments.