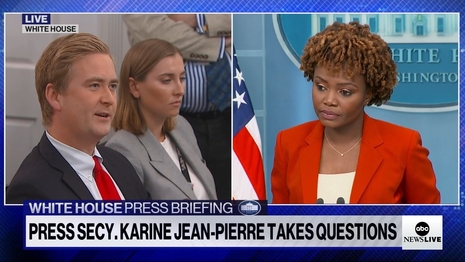 During Thursday’s White House press briefing, Press Secretary Karine Jean-Pierre found herself facing a mountain of questions about WNBA star Brittney Griner’s unjustified detainment in Russia, but she saw plenty of others with some coming from the left on abortion and diversity and, of course, a helping of Peter Doocy.

Prior to Doocy Time, The Grio’s April Ryan fired off this insanity of a question concerning the vacancy at the top of the Secret Service:

Last question on the Secret Service director. Is equity and inclusion still a part of the President’s hiring practices when he looks at that spot because you have never had a Black man or someone — another color, I guess, be the head of that organization?

Jean-Pierre surprisingly didn’t bite, telling Ryan she won’t “get ahead of the process” even though “this is a President that prides on making sure that we have equity, that we have inclusion” and “an administration that looks like America.”

A few minutes later, Doocy began with gargantuan result out of the new Monmouth University poll: “Why do you think it is that 88 percent of people in this country polled by Monmouth think that the country is on the wrong track?”

Jean-Pierre stuck to her cringeworthy talking points, insisting President Biden “understands what the American people are going through,” including the fact that “gas prices are high because of Putin's tax hike.”

After she insisted the White House has “a plan” while Republicans would rather “take away rights from the American people,” Doocy hit her with a reality check: “But do you think it's possible that your plans just is not popular with the American people right now?”

Jean-Pierre not only denied that’s the case, but went down the path of tone-deafness when she tried to simultaneously claim “[w]e understand what” Americans “are feeling” even though “we are stronger economically than we have been in history.”

Doocy tried again and took things in a surprising direction: “So, if you think that the — your plan is popular with the American people, is it just that the plans are not being communicated properly and is that why the communications director is leaving?”

Jean-Pierre quipped she wasn’t sure where Doocy was “going with this,” so it was “very slick” to work Kate Bedingfield’s departure into the equation.

Doocy insisted he wanted to know why she was actually leaving when “a historic number of people think the country is on the wrong track” and she’s “been a part of Bidenworld for as long as just about anybody here.”

Jean-Pierre again stuck to the party line and touted Bedingfield as “a friend” who “will be greatly missed” even though it won’t “have effect [sic] on what we’re trying to do.”

Doocy closed with a troubling proposal from the National Education Association (which is the leading teachers union) that “future contracts...replace the word ‘mother’ with ‘birthing parent.’”

Asked what Biden thought of such an idea, Jean-Pierre brushed it aside since “we’re not the NEA.”

Doocy pushed back, noting the close ties between the Biden administration, labor unions, and the NEA (click “expand”):

DOOCY: The Vice President just spoke at that conference, though. The First Lady's a teacher.

DOOCY: The President says he's the most —

DOOCY: Does he support proposals like that one? Does he think that is an important priority for —

JEAN-PIERRE: And the First Lady’s a proud member of the NEA. I’m not going to speak about a — an organization’s policy or change of policy. I am not their spokesperson. It’s not something that I’m going to do. Yes, the Vice President was there on Tuesday. She spoke at NEA and when they did — when they did regular order, when they did their regular business, she left, so she was also not part of that discussion. Look, this is a policy change. That is not something that I — I can speak to. I refer you to NEA.

And at the end of the briefing, PBS’s Laura Barron-Lopez pressed Jean-Pierre from the left on whether the administration will allow the Department of Veterans Affairs to perform abortions (click “expand”):

BARRON-LOPEZ: The Veterans Affairs currently doesn't offer any abortion services and any exceptions. But VA Secretary McDonough has told Congress — he told them in April, that the VA has statutory authority to provide abortion services that the law permits it. So, does the President agree with the VA secretary that the department can take this action?

BARRON-LOPEZ: Based on regulation, though — is the President considering at all any kind of executive action to direct the VA, given that it’s regulation is —

JEAN-PIERRE: So, I don't have anything specifically on the VA. We have talked about the President reviewing executive actions. I'm not going to get ahead on what those actions are going to be. But, like I said, you know, we’re going to continue to review and look at options here. And, you know, the President is going to continue — he did use his executive authority when the decision came down — within hours of the decision that came down — the — Roe being striked [sic] down. And so, those authorities, we believed, were — were impactful for the moment when you’re talking about providing safe medication — FDA-approved medication — so women can make decisions on their health care. Medication, which is what a majority of women when they are looking to — to make that decision on — on an abortion, which is a very personal decision. And also women who have to travel as well, making sure that DOJ protect their rights. And we think those are incredibly impactful, incredibly important. And, like I said, the President is going to continue to look at all his options.