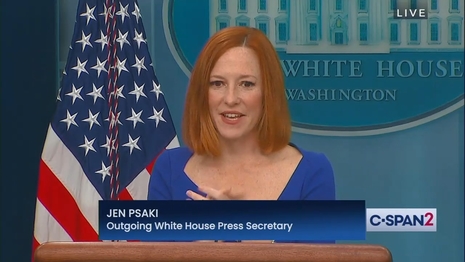 In one of Washington’s worst-kept secrets that raised all sorts of ethical concerns, MSNBC finally announced Tuesday that former White House Press Secretary Jen Psaki would not only be joining the network “this fall...all the network’s programs on cable and streaming,” but she would be appearing on NBC and launching a real-life, yet-to-be-named Psaki Show on NBCUniversal’s streaming platform Peacock in 2023.

That, dear readers, is what one would call a massive revolving door between corporate, liberal media and the very government they claim to be working to hold to account. This will mark Psaki’s second foray into cable after having been a CNN political commentator from 2017 to 2020.

MSNBC said in a statement she’ll helm “a new original program currently under development for streaming” and “set to debut in the first quarter of 2023” that “will bring together her unique perspective from behind the podium and her deep experience in the highest levels of government and presidential politics[.]”

MSNBC boss Rashida Jones trumpeted Psaki as someone possessing a “sharp wit and relatability” and “mastery of the subjects she covers” that transformed her into a “household name across the nation” who’ll bring “the type of analysis that sets MSNBC apart.”

If that means deft but shameless spin for fellow liberals and ghoulish views such as encouraging protests at the homes of conservatives with whom she disagrees, then we guess she’ll be top notch.

“She’s a familiar face and trusted authority to MSNBC viewers, and we look forward to her insight during this consequential election season,” Jones added.

For her part, Psaki hilariously claimed that she was “thrilled to join the incredible MSNBC team” to help further “[f]act-based and thoughtful conversations about the big questions on the minds of people across the country” as they’ve “never been more important.”

She closed by promising that her “time in government...will fuel the insight and perspective I bring” in “creat[ing] a space on streaming where we break down the facts, get to the bottom of what’s driving the issues and hopefully have some fun along the way.”

Over at Axios, Sara Fischer noted the Psaki hire “matters” because “[i]t’s part of a broader effort by MSNBC to bring on partisan pundits that appeal to the network's progressive base” following the hire of Psaki’s former Biden administration colleague and CNN commentator Symone Sanders.

MSNBC said in their release that both are part of other hosting hires/promotions, such as Medhi Hasan, Zerlina Maxwell, Ayman Mohyeldin, and Katie Phang.

Seeing as how one of MSNBC’s prior slogans was “Lean Forward,” it’s not a stretch to diagnose the network as not only having leaned forward with these hires (and promoting the likes of Tiffany Cross and Joy Reid), but dived head-first into the furthest reaches of progressivism.