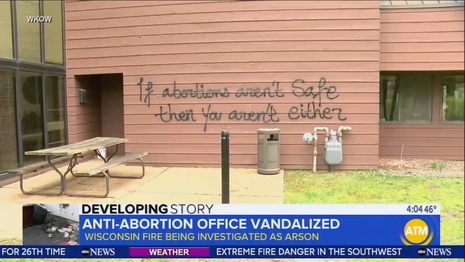 With Tim Graham and Nick Fondacaro away today, I flew solo as host of the show following an extremely busy news weekend. We focused on the liberal media’s sudden change in tone when it comes to threats against political organizations and public officials in the wake of the leaked Supreme Court opinion on abortion.

Over the weekend, we saw pro-abortion terrorism perpetuated against a Catholic Church in Colorado and a pro-life Wisconsin organization with both downplayed by the liberal media and the latter described by Politico as “a fire” that “broke out Sunday at the office of an anti-abortion group” and the AP reporting that “vandals struck an anti-abortion group office.”

I also touched on the far-left protests outside the homes of Supreme Court justices, which were given the White House’s endorsement last week.

All told, this past week’s threats to pro-life groups and Supreme Court justices have illustrated proof that, for many in the liberal media, one’s safety should be contingent upon whom you vote for and what views you hold.

The left has set these new rules of engagement. And it’s going down a dangerous road. It’s on all of us to demand leaders cool the temperature. Because the terrorism being perpetuated against pro-lifers and the Catholic Church has to stop.

Enjoy the podcast below or wherever you get your favorite podcasts.