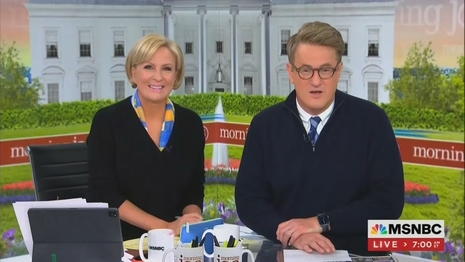 In one of the least shocking headlines you’ll see, Politico reported Tuesday that President Biden “regularly watches some [cable news] shows” with MSNBC’s Morning Joe not only being his favorite, but so much that he’s “spoken privately on occasion” with co-hosts and married couple Joe Scarborough and Mika Brzezinski. And, as per the book This Will Not Pass from New York Times reporters Alex Burns and Jonathan Martin, Biden’s a “devout” viewer.

Politico White House reporters Max Tani and Alex Thompson cited “[m]ultiple people with knowledge of the president’s media consumption habits” that he put on Morning Joe “in the background as he starts his day” and that he’s repeatedly spoken with the co-hosts since the election despite it not having “nailed down a one-on-one interview.”

Tani and Thompson noted it’s not entirely surprising given the “informal and overt link” between the three of them since she’s known the now-President “since she was a kid” and her brother Mark is the Biden administration’s U.S. Ambassador to Poland.

Before citing their interview of Biden amid the Tara Reade saga as one example of tense relations, they illustrated how it’s largely been fluff, down to one of their most frequent panelists (and fellow plagiarist), Mike Barnicle:

BURNS and MARTIN dubbed Biden a “devout Morning Joe” viewer and reported that Harris sought counsel from Scarborough. A person close to the MSNBC host said he and the veep do not have such a close relationship where she would seek out his advice, though they did briefly see each other during a recent White House visit.

Biden, however, has turned to Morning Joe regulars on occasion. The president considers the program’s frequent guest, MIKE BARNICLE, a friend — a relationship that Barnicle himself described as mutual. "I’ve known the President for a long time and am fortunate to be a friend of his," he said, stressing that he has not used his ties to Biden to advise him politically.

The Biden campaign also felt that Scarborough gave them fair treatment during the primary campaign, and did not write him off like other political pundits did.

And while it could have become a source of tension when liberal presidential historian and former Newsweek editor Jon Meacham lost his MSNBC contributor gig after it became public he was serving as a Biden campaign speechwriter, Tani and Thompson noted it hasn’t thrown a wrench into the coziness as “Meacham still regularly appears on Morning Joe as a guest.”