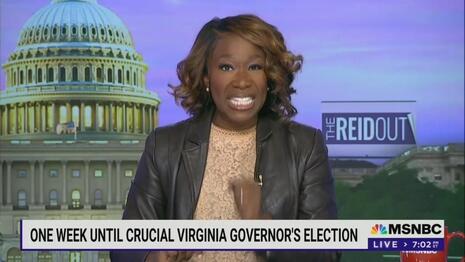 Folks, feast your eyes and ears on some pure liberal panic. On Monday and Tuesday, MSNBC’s The ReidOut and host Joy Reid and a cadre of liberals hit the panic button upon seeing Virginia Republican gubernatorial candidate Glenn Youngkin has a shot at pulling off an upset over former Governor Terry McAuliffe (D).

Of course, they took it upon themselves to lie about Youngkin on education, racism, voting, and insist he’s “worse” than “MangoMussolini” Donald Trump. And when discussing the Loudoun County teen who was raped by a boy wearing a skirt in a girl’s bathroom, one panelist said “Youngkin and surrogates have...exploit[ed]” it to “demagogu[e] about trans kids.”

Reid used the campaign as the c-block for Monday’s show, lamenting Youngkin “could reverse all of” the “progressive laws” implemented by outgoing Governor Ralph Northam (D) (whom she wouldn’t point out wore blackface) and falsely accused Youngkin of being “against racial inclusiveness in schools and says an abortion ban in Virginia is appropriate.”

So, can you explain why it’s even close, when you have a Trump-backed Republican who’s vowing to turn it basically into a mini-Texas on abortion and who’s, you know, out there doing the — whining about Critical Race Theory, which isn’t taught in Virginia schools?

The facts show otherwise as, on Texas, Youngkin has said he wouldn’t sign such a bill into law and, on CRT, it’s patently false to say race-based education hasn’t arrived in our classrooms.

Reid also called for a permanent ban on Republican officeholders because “[g]iving any Republican power seems so dangerous” as, no matter their shade of red, they’ll be “trying to steal the 2024 election for Trump” and fudge vote tallies.

Going down an inevitable conclusion, Reid warned that “he is no different than any other Republican” and voters need to “[p]ay attention...because it’s the ones who try to sneak in under the radar, a lot of times they’re even worse.”

Youngkin must have been on Reid’s mind and that of her pals on the McAuliffe campaign as, right on cue, she opened Tuesday’s show with the campaign and the narrative peddled at a McAuliffe rally that Youngkin hates Black women because a woman in one of his campaign ads called for the banning of Toni Morrison’s Beloved in 2013.

Reid used that as a jumping-off point to claim “Glenn Trumpkin” was engaging in race-baiting by running a campaign “based on...the delicate feelings of conservativ-ish white suburbanites” while “pouring high octane gasoline on cultural anxiety over jobs and societal change and weaponizing anything that makes white Christians feel icky” (click “expand”):

We begin The ReidOut with Beloved. The Pulitzer Prize-winning novel by Novel Laureate Toni Morrison that tells the story of a runaway enslaved woman named Sethe, who kills her baby daughter to spare the child from a traumatic life in bondage...[A]pparently, for some white parents, the real pain isn’t about black people. No, no. The pain is actually about them, their feelings. Back in 2013, one white parent advocated banning Beloved from Virginia schools because it gave her son, then a high school senior, nightmares. That parent appeared in a new ad Monday by the Republican running for governor of Virginia, Glenn Youngkin, who has vowed to ban teaching critical race theory, which is not taught in public schools, only in law schools. But no matter. He wants to ban Beloved too.

[S]uch tactics are one of the many reasons that this is the political race to pay close attention to. It tells you everything you need to know about the Republican playbook leading into next week and next year. Glenn Trumpkin — sorry, I mean, Glenn Youngkin — is locked in a dead-heat with Democrat Terry McAuliffe...Youngkin is endorsed by MangoMussolini himself, but acting just moderate enough to try to snag those suburban swing voters that he needs to prevail. The fight for the white suburb vote is happening there, but also throughout the country, even in states like New Jersey with Republicans trying to seize control, based on playing on the delicate feelings of conservativ-ish white suburbanites.

The tactic is nothing new. The Republicans have simply followed Trump's lead, pouring high octane gasoline on cultural anxiety over jobs and societal change and weaponizing anything that makes white Christians feel icky; which is apparently a lot, like losing a fair election and not getting to have the president that they wanted, like having to engage in our actual history because let's face it, this isn't a war against critical race theory.

Reid continued spewing her vile bile, claiming Youngkin and his party were against books on Martin Luther King Jr., “facts and knowledge,” trans children so as not to incur any “cis tears,” and “masks and vaccines” because they prevent people from killing themselves with Covid.

Back in reality, Youngkin released an ad supporting the vaccine and encouraging Virginians to get it.

Supposedly a journalist, The 19th’s Errin Haines said “the racial playbook” Youngkin’s using of the Beloved-banning supporter “is not limited to the Big Lie of a rigged election or voter fraud” as “[r]ace-based appeals to white voters are an increasingly perennial aspect of GOP politics.”

Reid then touted a cartoonishly dumb ad from the pedophile-hiding Lincoln Project, which claimed Youngkin supports “[a]nti-Semitism, racism, deny gay couple the rights to marry, [and] that ugly Charlottesville hate.”

Right on cue, she told Lincoln Project senior adviser Stuart Stevens that Youngkin’s the kind of person who’s “saying to white parents you have to fear books about black people or about white people ever having done anything that wasn't amazing.”

As New York Times columnist Michelle Goldberg would do afterward, Stevens obliged and said the campaign hinges on whether Virginians want to support racism (click “expand”):

STEVENS: Ultimately, this is all about race. And, you know, I wrote a book about this called It Was All a Lie. Racism: The Original Sin in the Modern Republican Party. And we used to, as Republicans, admit this and try to change, at least. I mean, Ken Melmann went before the NAACP in 2005, chairman of the party, and apologized for the Southern Strategy. All that’s out the window now. This is really a straight up simple race. Donald Trump lost Virginia by ten points on November 3rd, 2020. If you didn't vote for Donald Trump November 3rd, 2020 why would you vote for him on November 2nd, 2021? If you didn’t vote for Donald Trump on November 3, why would you vote for him on November 2, 2021? He's Trump's candidate. And this — this issue over the only African-American woman to win the Nobel Peace Prize — Nobel Literature Prize is just — embodies all of these things. It's about denying of history, as you were saying. It's about race and look, what is this about cancel culture? They’re trying to cancel the only African-American female Noble laureate in literature? It just shows the complete fraud nature of the entire Republican ethos net.

GOLDBERG: They will make it out as if there is these kinds of Maoist reeducation sessions going on in elementary schools. I think that Glenn Youngkin, in some sense, has done us a favor by telling us, no, this is what they're talking about. They're talking about banning Tony Morrison. You know, They're talking — they've been talking about banning all sorts of, you know, sort of, historical — the legitimate teaching of history. This isn't about, you know, kind of browbeating your kids about white privilege. This is about giving them a well rounded education.

Goldberg also touched on the Loudoun County rape, claiming that “Youngkin and surrogates have been running and demagoging about trans kids in schools and trans bathrooms and there was a horrible rape of a — of a — of a high school girl in Virginia that they've been using and sort of exploiting to act as if trans people are predators[.]”

Before the A-block wrapped, Reid and Stevens claimed without evidence that, if elected, Youngkin and all blue-state Republican governors would fabricate election totals to ensure Trump returns to office in January 2025 (click “expand”):

REID: [I]f they succeed in taking back states that tend to vote Democratic in presidential years, states like Virginia, states like New Jersey. Is there any doubt in your mind that those governors, I don't care what they're pretending to be now, are going to use their positions to try to take the election for Trump if he runs in 2024, including Youngkin?

STEVENS: Yeah, sadly, I think not. This is what Donald Trump, who couldn't name a governor in America a few years ago, is so interested suddenly in governors. It's because they know that they can pass laws — they're going to try to pass laws that, if the states are close in 2024, they're going to try to overturn the election with these Republican legislatures. There’s not really any secret about this. They've made it clear this is all part of a sort of concentrated strategy and again, it's mostly about race. What was the effort to deny certification? It was based upon those areas that were so mysterious that were mostly Black and supposedly illegal voting. It's because the country is changing and Republicans had a basic choice. They could adapt and appeal to the non-white voters or they could try to make it harder for non-white voters to vote and tragically, they have taken that path.

Joy Reid’s pants-on-fire lies about Youngkin and race-baiting fetish was made possible thanks to the endorsement of advertisers such as Amazon, Farmers Insurance, Tractor Supply Co., and Uber Eats. Follow the links to see their contact information at the MRC’s Conservatives Fight Back page.

To see the relevant MSNBC transcripts from October 25 and 26, click here.