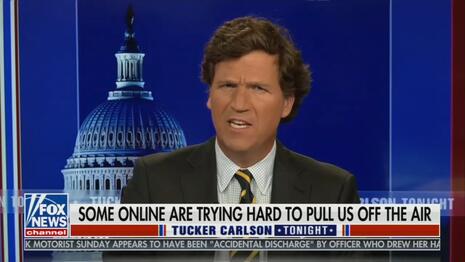 In a bit so obvious that they couldn’t have denied it if they even tried, The Washington Post has spent the past week going into overdrive in favor of censorship. The Post has called for removing Fox News Channel host Tucker Carlson from the air to the tune of at least 11 items over the past six days, attacking the highly-influential primetime show.

The Post played its role as a cog in the hate movement against Fox and insisting Carlson is a white supremacist. The effort has recently added the Anti-Defamation League (ADL) to its ranks and a conveniently-timed interview with head Jonathan Greenblatt on CNN’s Reliable Sources over Carlson's opposition to mass, unfettered immigration.

The onslaught started April 9 in the form of two items with one supposedly meant to be a news analysis article by the ever-pompous Philip Bump (disguised as an opinion) with the title “Tucker Carlson’s espousal of ‘replacement’ theory is both toxic and ahistoric.”

The first of two actual news articles arrived on Monday, April 12 with Jaclyn Peiser’s xeroxing of the Greenblatt’s CNN interview in which he demanded Carlson to be axed because of his “open-ended endorsement of white supremacist ideology”

The PR campaign went into overdrive that day with three more stories, including a wire story from the Associated Press. Two of them were columns, including Hack Madness champion Jennifer Rubin demanding Carlson be punished for his “venom” that “propound[ed] White supremacist replacement theory” and fellow Never Trump Michael Gerson saying that Carlson is a living, breathing example of “what mass-marketed racism looks like.”

Rubin would further lampoon herself with another column on Tuesday claiming that the GOP has become a terrorist organization and that it’s an “instigator of...violence” and urged Americans to “spring into action” against them.

Three more pieces would follow thanks to Bump, “Plum Line” writer Greg Sargent, and lefty columnist David Von Drehle that, like the others, made the same point of Carlson and FNC being not only racists, but greedy racists.

And tell me again how things like this and the attacks on Georgia aren’t coordinated between columnists, journalists, and activists (but I repeat myself).

On Wednesday, The Fix’s Aaron Blake got in on the action with “Tucker Carlson’s highly illogical case for questioning vaccine effectiveness,” which took aim at his concerns with the coronavirus vaccines.

But regarding the other stories stemming from his remarks about immigration and liberals wanting to create a system in which new immigrants would become dependent upon the state and the Democratic Party for their well being, Federalist senior contributor and JNS.org editor in chief Jonathan S. Toobin disemboweled the hysteria.

We highly recommend the whole piece, but here are two excerpts (click “expand”):

His critics think they finally have nailed Tucker Carlson. His claim last week that Democrats intend to “replace” the existing American electorate with immigrants from Central America was denounced by the Anti-Defamation League as proof that he is a white supremacist and racist who should be fired or forced to resign from his perch as a prime-time host on Fox News.

Because neo-Nazis chanted “you will not replace us” during the torchlight march in Charlottesville, Virginia in August 2017 — a standard antisemitic trope —  the ADL proclaimed that there was no longer any doubt that Carlson was trafficking in white supremacism. But while pundits like former Republican Michael Gerson writing in the Washington Post and hard-core leftists like The New York Times’ Charles Blow chimed in to agree, a closer look at the recent use of the term debunks their argument.

As Carlson rightly pointed out in a Monday riposte to his critics, there’s nothing original about his claim that Democrats think they can “replace” American voters with immigrants. That’s because liberal think tanks, journalists, and Democratic politicians have been boasting about the same thing for years, as they repeatedly predicted that demographic trends involving immigrants and minorities will doom the Republican Party.

CNN and MSNBC can play the video of the Charlottesville neo-Nazis chanting about not being replaced by Jews on a video loop as long as they like. The real weakness of the arguments against Carlson is that until recently, the ones talking about immigrants replacing or overwhelming white voters have been liberals.

In 2017, The Atlantic published an article predicting that Trump’s appeal to whites wouldn’t help Republicans in the long run because the demographics were changing to favor Democrats because of nonwhite population growth.

In 2018, the liberal Brookings Institution boldly predicted that the United States will become “minority white” by 2045 and cited immigration from Hispanic countries as a major factor in making that a reality. In 2019, the pro-immigration Niskanen Center made a similar point and pointedly asked “When will Republicans face demographic reality?”

If The Post was interested in nuance and good-faith debates, they would have looked at the past statements that Toobin outlined (and what are almost certainly many, many more cases), but instead, they had talk points to stick to and lazy, unoriginal columns to churn out. And what a miserable life that must be.