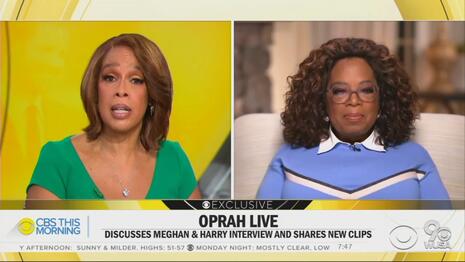 Following Oprah Winfrey’s exclusive interview with former royals Meghan Markle and Harry Windsor, the broadcast network morning newscasts filled their programs with 91 minutes and 25 seconds of coverage fawning over the claims by the couple about the alleged horrors and racism carried out by the British royal family as facts.

ABC’s Good Morning America, CBS This Morning, and NBC’s Today made sure to come across as loyal PR agents with airtime having worked out to roughly 39 percent of combined airtime (minus bottom and top of the hour local news breaks and teases).

Having reportedly paid the couple $7 million for the interview, CBS was the worst as This Morning gave 45 minutes and 16 seconds (or a whopping 71.5 percent of their newscast) to discussing the “bombshell”-filled interview with Oprah herself, recapping key moments, sharing new clips, and fretting about the torturous life they must now live in the U.S.

NBC's Today had the second-most time, but was well behind CBS with 25 minutes and seven seconds (or 24.6 percent) over the course of its newscast. For this count, NewsBusters included the third hour of Today.

In a surprising third-place, the always-superficial GMA had 21 minutes and two seconds on the former royals (or around 30.8 percent of the program).

While this would be an apples-to-orange comparison, the 91 minutes and 25 seconds came out to 15 times larger than the 15 minutes and 33 seconds their evening counterparts spent over ten months on New York Democratic Governor Andrew Cuomo’s COVID nursing home scandal. And in an ironic twist, all three followed up on their penchant for showing concern about alleged media bias against Harry and Meghan.

Again, CBS was far and away the worst and more than happy to shill for their corporate overlords under the guise of news. And in one of the few non-royal segments, they spent eight minutes sucking up to far-left activist Stacy Abrams.

Co-host, Democratic donor, and Winfrey best friend Gayle King boasted at the top of the show and then after the Eye Opener (click “expand”):

Oh, boy....Good morning, welcome to CBS This Morning. Is your jaw still on the floor? A lot of people's are today because pick a word to describe what we saw last night...I’ll go with bonkers...It’s an interview you've never seen before in the history of the royal family. Oprah's going to join us live with clips that did not air last night.

Here's another word to add to the list of how you describe last night, and we'll begin with there — explosive. The explosive interview touched on so many issues including race, mental health, and what appears to be a deep rivet in the royal family. Prince Harry and Meghan were candid — quite candid and emotional as they spoke with Oprah in their first major interview together since stepping down from royal duties. But in order to tell what they say is the real story, the couple also had to address what they call is the false reporting of tabloid newspapers, starting with a widely-reported rumor about Meghan, that she made her future sister-in-law, Kate Middleton, cry. That was a week of Harry and Meghan's wedding.

Co-hosts Tony Dokoupil and Anthony Mason replied with words of their own as Mason called Sunday’s interview “riveting” and Dokoupil having chosen “bonkers.” 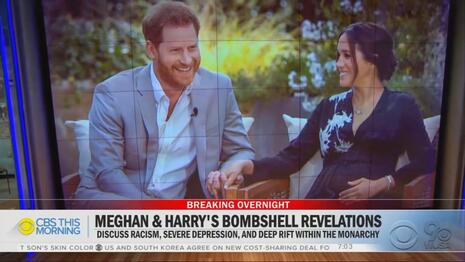 The trio refused to note CBS’s decision to go full corporate shill. Instead, King gushed over how it was important to note Meghan’s expecting a girl because “despite all of the heaviness of last night's interview and the seriousness and all the emotions, to say there was great news, she's pregnant with a baby girl.”

Later in the show, Mason fretted that, as part of the British seeming to be out to get Harry and Meghan: “There is almost a deep state within the monarchy that runs the monarchy.”

Ah, so talking about a Deep State inside the federal government opposing Donald Trump was bad and insulting, but a Deep State within British Royalty is worth sneering at?

On a similar note, the networks must think viewers were so stupid that we’re supposed to believe Meghan’s claims that she never Googled Harry but did have to do a search for the U.K.’s national anthem.

With days like Monday saved in the memory bank, don’t let the liberal establishment media tell you that they’re serious journalists while Fox News and conservative media are unserious loons that are dangerous for democracy.

As Megyn Kelly wrote in one of her many tweets calling out their pathetic sense of entitlement, this was one of many questions that need to be asked: “Have you ever seen such privileged people wallowing in their own (perceived) victimhood like this?”

But it was perhaps our friend Erick Erickson who said it best: “So essentially Harry and Meghan have joined Woke-o Haram and want to cancel the Royal Family for not being woke.”

This pathetic lack of stories and journalism was made possible thanks to the support of advertisers such as Amazon (on CBS), Ancestry (on CBS), Liberty Mutual (on ABC), and Uber Eats (on NBC). Follow the links to see their contact information at the MRC’s Conservatives Fight Back page.